Izium 5-year-old Lesia Stolpakova, with her aunt, Marika who was just 13. They were killed by a Russian airstrike on their apartment block, together with six other members of their family, another victim identified only by number

Demands are mounting for an international tribunal over Russia’s invasion of Ukraine and the growing evidence of mass war crimes.  The latest call has come from Jan Lipavsky, Foreign Minister of the Czech Republic which holds the European Union presidency.  He was responding to the discovery of a mass burial site at Izium (Kharkiv oblast) which contains at least 450 bodies, with the majority of these almost certainly civilians killed since Russia began its full-scale invasion of Ukraine on 24 February.  Lipavsky said that “in the 21st Century, such attacks against the civilian population are unthinkable and abhorrent”, and called for the punishment of all war criminals.

Mass exhumations are continuing at the burial site in the forest on the outskirts of Izium which was under Russian occupation for six months.  At the end of the second day of exhumations, the bodies had been uncovered of 17 soldiers and 42 civilians (26 women and 16 men).  The bodies of the soldiers were in a common grave.

According to Oleh Syniehubov, Head of the Kharkiv Regional Administration, 99% of the bodies initially exhumed had died a violent death. Many of the victims had hands bound or showed other signs of torture.  Oleksandr Ilyenkov, a Kharkiv regional prosecutor, told the BBC that they had found the body of a woman with a rope around her neck.

Although not all, perhaps not even most, of the victims were tortured, there are certainly grounds for calling these war crimes as Russia was very deliberately bombing and shelling civilian targets.  It was inevitable that they would kill families, children.  Their victims in Izium included eight members of the Stolpakov family – 31-year-old Olena, her 33-year-old husband Dmytro, their two daughters – Sasha (8) and 5-year-old Lesia.  They were killed, together with Olena’s 13-year-old sister, Marika, their parents, and grandmother, in the early morning of 9 March, when the Russians bombed their multistorey apartment block and then, according to neighbours, fired at it from a tank.  At least 44 residents died, most of them trapped by debris in the basement where they had sought shelter. Survivors were unable to rescue them because of relentless Russian shelling.  Another family Anatoly, Halyna and their 14-year-old son, Artem, had also been killed when their apartment block was hit on 9 March.

The family’s remains lie in named graves, however in very many cases there are only numbers.  The fact that there are separate graves is probably in part thanks to employees of funeral services in Izium who continued to work, despite threats from the Russians.  CurrentTime spoke with Viktoria Stetsenko, whose family owns most of the funeral parlours in Izium.  They left after the invasion, but many of their employees remained, and tried to continue burials, where they could, given the dangers posed by the Russian invaders.  During quieter periods, the employees had reburied victims who had, due to the danger, been buried in makeshift graves in courtyards.  They tried, to the best of their ability, to document each body so that they could be identified (and reburied) later. 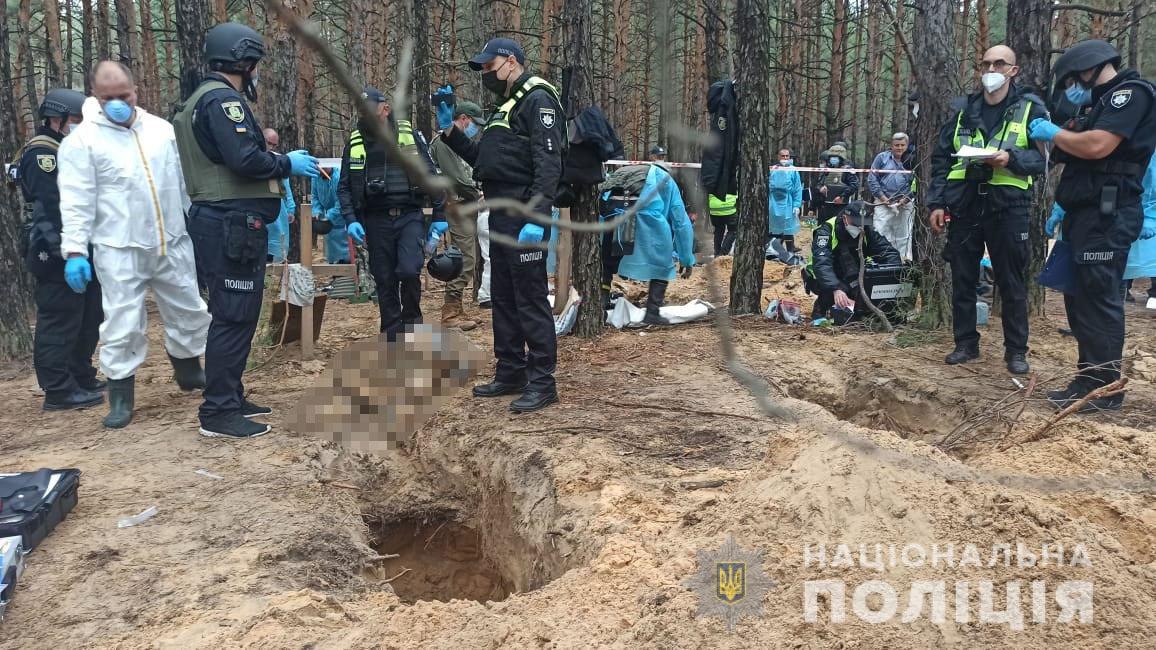 The Russians threatened these employees, imposed their own procedure.  They also tried to take the employees’ cars away and, in one case, they have told Stetsenko, they killed a person who refused to hand his car over.

Russia’s crimes in Izium and Kharkiv oblast are not restricted to this burial site alone.  On 16 September, Ihor Klymenko, the Head of Ukraine’s National Police reported that they had already discovered ten places that the Russians had used for imprisoning and torturing Ukrainians in the parts of the Kharkiv oblast recently liberated.

50-year-old Maksym himself approached western journalists in Izium, wanting them to know about the torture he had been subjected to.  He was one of the luckier ones, since he had managed to escape after being detained for the first time in March.  He was then seized by Russians who claimed he was a Ukrainian spy on 3 September, just seven days before the city was liberated by the Ukrainian Armed Forces. The Russians  had taken him to a basement in the Izium police station and attached a clip to his finger sending excruciating electric currents through his body. This is a ‘favourite’ form of Russian torture, used by the FSB against Crimean Tatar and other Ukrainian political prisoners.  Here, the equipment, which is also reported to have been used in Kozacha Lopan and Balakliya, appears to have been extremely primitive, but savage in its effect.

In Izium, as elsewhere, the Russians have hunted any residents viewed as being ‘too pro-Ukrainian’; volunteers, as well as people who either themselves earlier defended Ukraine in the military conflict in Donbas, or who have relatives in the Ukrainian Armed Forces.