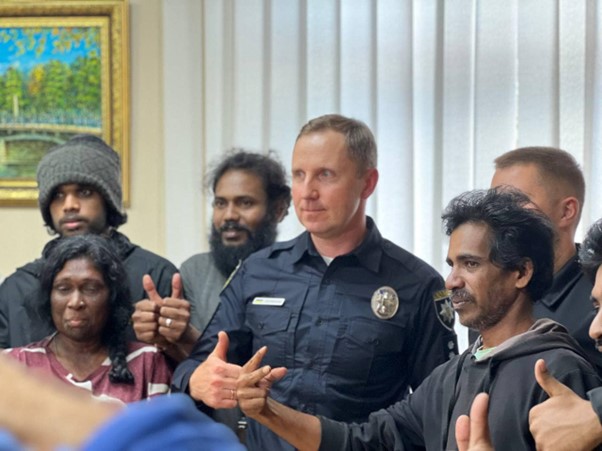 Seven Sri Lankan medical students are receiving medical care after they were rescued by the Ukrainian Armed Forces after four months held prisoner by the Russian invaders, occupying Vovchansk (Kharkiv oblast).  With the students’ release having initially been reported on 16 September by Ukrainian President Volodymyr Zelensky and prompted a response from, among others, Sri Lanka’s Ministry of Foreign Affairs, Russia decided to turn the story on its head.  By 17 September, it was claiming that the Ukrainian Armed Forces had ‘detained’ seven Sri Lankan students and taken them away in an undisclosed direction.  The Russian story makes absolutely no sense, but neither did the bewildering range of ‘alternative versions’ for Russia’s downing of Malaysian airliner MH17 over occupied Donbas on 17 July, 2014.  All such lies appear aimed at achieving competing headlines and at creating the entirely false idea that all such ‘versions’ are equally possible.

On 18 September, Serhiy Bolvinov, Chief Investigator for the Kharkiv oblast, provided details about how the Sri Lankan students, one woman and six men, had been seized by the Russians.  The seven were studying at the Kupiansk Medical Institute and, after Russia began its full-scale invasion, decided to stay put and to try to hide.  They had presumably changed their mind in May, and decided to try to get to Kharkiv on foot.  They were, however, stopped at the very first Russian checkpoint.  The Russians bound their hands, put bags over their heads and took them to an improvised prison in Vovchansk.

Bolvinov reports that all were held in inhuman conditions and were forced to work as cleaners.  The woman, he says, was held in a punishment cell for two months, and two of the students had fingernails pulled out, with one beaten around the head with a door. The Russians did not speak English, so the Sri Lankans did not know what they wanted of them. In fact, they told Ukrainian investigators that the Russians did use one English word during the torture, namely ‘money’. If this is true, Bolvinov is probably right in assuming that they were trying to get money out of the students, perhaps in exchange for their release.  It was a hotel guard who helped them after Vovchansk was liberated by the Ukrainian Armed Forces, and who contacted the police. Bolvinov says that an investigation is underway, with the seven Sri Lankans questioned as victims.  He adds that the Sri Lankan embassy has been contacted.

The information was accompanied by a photo of the seven sitting together with Bolvinov and looking perfectly happy to be there.  Even were they to somehow feel under pressure before Ukrainian investigators and journalists, they will certainly be visited by people from the Sri Lankan embassy and would immediately reveal any discrepancy between their version and that recounted by the chief Kharkiv oblast investigator.

This is worth stressing only because of the bizarre stories circulated by the Russian state media in, at least, Russian and English.  TASS, for example, cites “an official” in claiming that the Ukrainian Armed Forces “detained seven students from Sri Lanka” and that it is not known where they were taken.  Nowhere is it spelled out that this supposed “head of the military-civilian administration Vitaly Ganchev” is a collaborator installed by the Russian invaders.  Ganchev’s claim appears to be aimed at claiming that testimony of Russian crimes from the Sri Lankans is “provocation’ against the Russian occupation regime.  The Russian presentation of alleged earlier claims by Ganchev suggest that Russia is seeking in Kharkiv oblast, like it has in Mariupol, to blame Ukrainian soldiers for Russian war crimes.  The report states that: “Ganchev previously said that Ukrainian forces and foreign mercenaries were torturing and shooting civilians in their zone of control. He stressed that this was happening in many places, including Izyum, Kupyansk, Veliky Burluk and Volchansk. He pointed out that it hard to say if those responsible for torturing and humiliating civilians were regular army soldiers, members of nationalist battalions or Ukraine’s security service SBU, but "there are now quite a few people who do not speak Russian or Ukrainian."  “Earlier, he told TASS that Ukraine simply sacrificed its civilian population in order to try to stage once again the Bucha scenario by speculating about the discovery of a mass grave in Izyum.”

These are truly incredible allegations given that all of the places mentioned were, until early in September, occupied by the Russian invaders. There are plenty of overtly manipulative ploys in the Russian media reports.  Radio Sputnik, for example, claims that “Sri Lanka’s foreign ministry called on Kyiv to provide information about the students detained” and claims in the first paragraph that these were students detained by the Ukrainian Armed Forces.  This is a brazen distortion of the Sri Lankan Foreign Ministry report which asks only that the news about the students be verified and further information provided.

If the aim is to elicit reports in the western media about Kyiv and Moscow “exchanging accusations” about crimes against the civilian population, Moscow’s chances of success seem remote.  The reports coming out of Izium in particular, but also other liberated towns and villages, are terrible, and, after Bucha, all too ominously familiar.