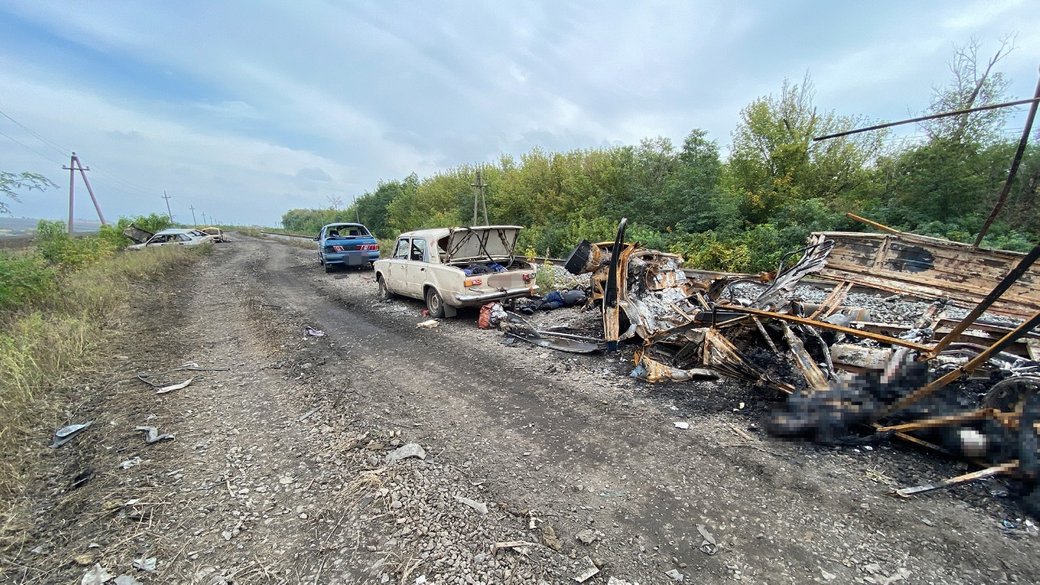 24 Ukrainian civilians were killed on 25 September when a convoy of six cars filled with local residents trying to escape Russian shelling came under attack.  The victims included a pregnant woman and 13 children.

Ukraine’s Prosecutor General directly accuses ‘soldiers from the aggressor state’ for this appalling attack on civilians. Prosecutors, investigators from the Security Service [SBU] and police are reported to have made the horrific discovery on 30 September near the village of Kurylivka in the Kupiansk raion (Kharkiv oblast).  It is possible that they were alerted by a Ukrainian soldier who first posted a video from the scene, however there were some survivors whose information will be vital. The attack is being investigated, as a war crime (under Article 438 of Ukraine’s Criminal Code), by the regional SBU.

Suspilne spoke with one of the few survivors, Olha Tereshchenko, whose husband and son were killed in the attack.  She explained that their home in Kurylivka had been hit by shelling three days earlier, and totally destroyed.  She and her husband had therefore decided to evacuate.  The convoy of six cars had set off early on 25 September, with their car at the front.  There was a driver and elderly lady in the front, while she, her husband and their son sat in the back.  Everybody in her car was killed except her when the shelling began at around 9 a.m.  She sustained burns and was initially stunned from the attack but managed to get out of the car just before it exploded.

Olha and the other survivors began running.  She says that those who attacked the convoy wanted to finish them off, to cover their tracks by killing the witnesses.  According to her, five to seven people survived.

Oleh Syniehubov, Kharkiv Regional Governor, points out that the invaders launched these attacks against civilians who were trying to flee the shelling.  There can be no justification for such brutality.

The discovery of that crime coincided with Russia’s missile strikes on a humanitarian convoy heading from Zaporizhzhia to occupied parts of the Zaporizhzhia oblast.  The death toll from the latter stands at 30 but is likely to rise since a huge number of people were badly injured when several missiles hit the convoy. The victims were civilians, who were trying to take humanitarian aid to family living under Russian occupation, or, in many cases, coming to get relatives or friends out.

The attack, just outside government-controlled Zaporizhzhia, came on the day that Russian leader Vladimir Putin tried to claim that the occupied parts of the Zaporizhzhia, Kherson, Donetsk and Luhansk oblasts had become part of the Russian Federation.  His deranged speech included frequent attempts to claim that Ukrainians whose territory had been invaded, bombed and systematically destroyed by the Russians, and whose relatives, in very many cases, had been killed by Russian soldiers, had all ‘voted’ (in sham referendums) to ‘join’ the aggressor state.