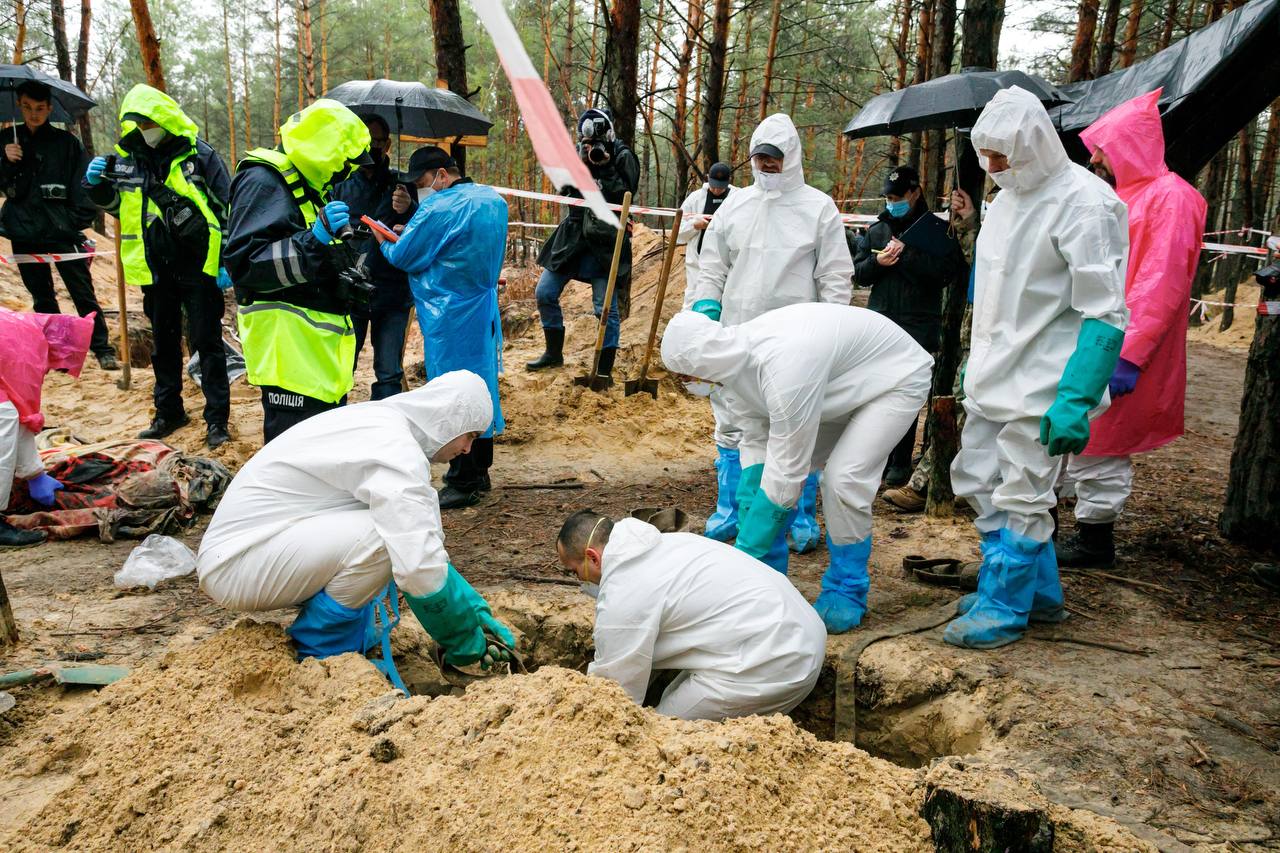 While Russia stages its sham ‘referendums’ to claim local support for it annexing occupied parts of Ukraine, investigators are continuing to uncover evidence of Russian crimes in those parts of the Kharkiv oblast which were liberated in early September.

Oleh Syniehubov, Head of the Kharkiv Regional Administration, reported on 23 September that the exhumation of bodies found at a mass burial site outside Izium had been completed.  All of the bodies of 411 civilians and 21 military personnel have been sent for forensic examination, however Syniehubov confirmed that the majority of victims had died a violent death and that thirty showed signs of torture.

There were bodies with nooses around their necks and with hands tied.  Some had broken arms or legs, and gunshots.  Syniehubov added that several bodies had genitals cut off, with this “proof of the horrific torture to which the invaders subjected Izium residents.”

Syniehubov also reports the finding of at least three other mass graves in the same district, and burial sites in other liberated cities.

According to chief Kharkiv regional investigator, Serhiy Bolvinov, investigators are examining the police station in Izium, which the invaders used as their headquarters, and as a place to imprison and torture Ukrainians.  A book used to list those imprisoned has been uncovered, as well as torture equipment, such as electric cables, gas masks and batons.  DNA samples and fingerprints have been taken from all rooms where the Russians held their victims.  People were held in such basements, Bolvinov says, from several weeks to months, often without any idea why.

Other such torture chambers have been found in Kharkiv oblast villages or towns.  As reported, at least three premises were used by the Russians for imprisoning and torturing local residents of Kozacha Lopan, an urban-style settlement very close to the border with the Russian Federation.  In one of these ‘prisons’, men and women were held together in a makeshift cage, with the Russians seemingly interrogating (almost certainly) torturing one victim in front of the other prisoners.

The Russians are already known to have used such ‘prisons’ in occupied Balakliya, the village of Lyptsy and other places.

Throughout Kharkiv oblast, and essentially any area under Russian occupation, local residents in many cases were abducted or simply vanished.  Serhiy Udovichenko was taken away by Russians from the village of Bairak in the Balakliya raion in March this year.  His brother Oleksandr has been desperately trying to find him ever since.  Serhiy is one of probably hundreds who were abducted, sometimes because the invaders suspected them of holding an active pro-Ukrainian position.  In many cases, it is simply unclear why a particular man or woman was targeted.

All of this was seen after the Russians were forced to retreat from Kyiv oblast in early April.  Some of the same international investigators, who were present at exhumations in Bucha, Irpin and other Kyiv oblast towns, will probably be involved in documenting evidence of war crimes in Kharkiv oblast as well.

This is the trail of atrocities that accompany any Russian seizure and occupation of Ukrainian territory.  They will almost certainly be found, perhaps on an even greater scale, on the territory of Donbas, Kherson and Zaporizhzhia oblasts currently under occupation. This accentuates the shocking cynicism behind Russia’s claim that local residents are almost 100% in favour of Russian annexation and makes it imperative that AP and other western media who carry headlines like “'Residents of Stanitsa Luhanska vote in referendum” are asked to correct such sloppy reporting. It is not sufficient to add somewhere in the body of the text that “Kyiv calls them a sham”, if the headlines are so clearly misleading.