Crimea beauty queen convicted of ‘discrediting Russia"s Armed Forces" by singing a Ukrainian patriotic song’Multiple jail terms for a patriotic Ukrainian song at Crimean Tatar wedding in Russian-occupied CrimeaJail or steep fines in Russian-occupied Crimea for playing a Ukrainian anti-war song or for saying ‘Glory to Ukraine’ Russian Prosecutor General given power to close media for ‘discrediting the army’ through truth about the war against UkraineYoung Crimean Tatar likely tortured into ‘confessing’ to anti-war protest Imprisoned in occupied Crimea for opposing Russia’s war against Ukraine Ukrainian seized and sentenced in Russian-occupied Crimea for pro-Ukrainian social media commentsArtist disappears after arrest for pro-Ukrainian anti-war protest in Russian occupied Crimea Crimean teacher dismissed and threatened with prosecution for telling students the truth about Russia’s war against UkraineRussia installs its propaganda TV after seizing Kherson and imposes 15-year sentences for reporting its invasion of UkraineUkrainian survivors of the Holocaust demand Putin and Russia get out of Ukraine Russia continues its carnage, flouting binding order from ECHR to stop bombing civilians in UkraineBabyn Yar bombed by Russia, 80 years after Nazi Massacre of Ukrainian Jews Russia proposes 15-year sentences and threatens "treason charges" for telling the truth about its war crimes in UkraineRussian schoolchildren told that Russia is bombing and killing Ukrainian children in ‘self-defence’ Putin miscalculated. Russia is fighting “an army of 40 million Ukrainians” Chief Rabbi of Ukraine demolishes Putin’s excuse for Russia’s invasion Russia bombs a Ukrainian kindergarten and apartments in its war against independent Ukraine Putin will continue attacking until Russia is stopped. Help Ukraine defend its freedom today!Russian Rule of Lawlessness in Occupied Crimea and Donbas
• Topics / Human Rights Abuses in Russian-occupied Crimea

Lecturer beaten, ‘tried’ and imprisoned in Russian-occupied Crimea for a Ukrainian patriotic song 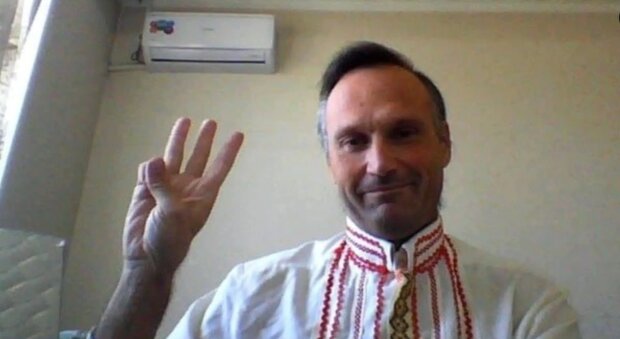 Yet another Ukrainian has been imprisoned in occupied Crimea merely for a post on VKontakte with the Ukrainian patriotic song Chervona Kalyna [Red Viburnum]. Andriy Bielozierov, who had already lost his post as lecturer at the Bilohirsk Technical College for another Ukrainian song, was first beaten by the Russian-controlled ‘officers’ who came for him, and then imprisoned for 14 days.

Bielozierov has told a correspondent from ‘Kholod’ that the FSB turned up at the hostel where he is living at 6.15 a.m. on 28 October. He was forced to the floor, in only his underwear, and kicked around the kidneys, the stomach and chest. The ‘officers’ also trod on his head, causing damage to his earlobes, and one hit him in the face. They took away his laptop, telephone and documents, including his Ukrainian passport, diplomas and the book recording his work record.  Several weeks later, his attempts to retrieve what was taken have failed, with him unable to even seek other employment without being able to prove that he was a teacher for 23 years.

He himself was taken to the so-called ‘centre for countering extremism’ in Simferopol. Russia has yet to come up with a charge directly prosecuting for singing or posting a Ukrainian patriotic song affirming Ukrainians’ striving for freedom and independence.  Instead, the Russian occupation regime charged Bielozierov with ‘propaganda or public demonstration of Nazi symbols, or symbols / other elements of extremist organizations or other symbols, etc. that are banned’, under Article 20.3 of Russia’s code of administrative offences. The charge is a pretext with the claim being that the song was adopted by the Organization of Ukrainian Nationalists which Russia has banned.  Persecution for any Ukrainians songs in occupied Crimea intensified after Russian military defeats, including the explosions at a military base in Crimea.  The particular ferocity of sentences for Chervona Kalyna is doubtless based on the enormous international prominence and poignance that the song has gained since Russia’s full-scale invasion of Ukraine in February. The version first sung alone by Andriy Klyvniuk from Boombox, then accompanied by others in a powerful Zoom performance was widely watched in Ukraine, and then became known worldwide through a Pink Floyd version with all proceeds going to the Ukrainian Humanitarian Fund.

This ‘Centre’ has become notorious for its involvement in persecution of Crimean Tatars and other Ukrainians.  Since it can usually rely on the Russian-controlled ‘courts’ to ask no questions, it pays no attention to credibility. Here Bielozierov was also charged under Article 19.3 with having ‘shown resistance’ to the officers who burst into his room and began beating and kicking him.

Bielozierov was found guilty of these absurd charges by ‘judge’ Aleksandr Vladimirovich Voronoi and jailed for fourteen days.

Bielozierov was dismissed from the Bilohirsk Technical College in September after he posted a video of himself and his students, with the Ukrainian song about the uses of the Bayraktar drone against the Russian invaders. He was detained in the middle of September and jailed for 13 days, as well as being dismissed from his job.  The lecturer explained to Kholod that he had been asked about the ‘events’ by his students and had replied. On this occasion, some of the students had come up to him during the break and asked how a drone works. There were about four or five students and Bielozierov opened his laptop and wrote in ‘Bayraktar’ on Google.  In the video, Bielozierov can be seen listening to the song, however, according to the Crimean Human Rights Group’s monitoring, his students denounced him.  They claimed that he had told them he was looking forward to the arrival of the Ukrainian Armed Forces, and that in social media he had been negative about the Russians, had been pleased at their losses and had suggested that the Crimean Bridge (illegally built by the invaders) would be hit.

As well as losing his job, Bielozierov was jailed for 13 days and fined 42 thousand roubles. Initially, the charge appears to have been under the same Article 20.3 (‘propaganda or public demonstration of Nazi symbols, or symbols / other elements of extremist organizations or other symbols, etc. that are banned’).  On 29 September, however, Kholod reported that Bielozierov had also been charged with ‘public actions aimed at discrediting the use of the Russian armed forces’ (Article 20.3.3).  It is not clear whether extra punishment was meted out.

As in several other cases, Bielozierov was also forced to ‘repent’ on video.

Although the occupation regime had already prosecuted for Ukrainian songs, the persecution intensified in September after the Russian-installed ‘leader’ of occupied Crimea, Sergei Aksyonov stated in a video on 12 September that he considered that those who “chant pro-Ukrainian slogans and sing nationalist songs” should be dismissed, prosecuted or “other measures within the framework of legislation”.

Within days, a Russian-controlled ‘court’ had jailed at least four people involved in a Crimean Tatar wedding in Bakhchysarai for playing a Ukrainian patriotic song, and fined others.