‘At the plant in Volchansk, the Russians tortured even the priest with an electric shock’
• Voices of war

‘Sashko and Vasyl Vasylovych were killed during shelling, and Slavko and Mykola were shot by the Russians’ 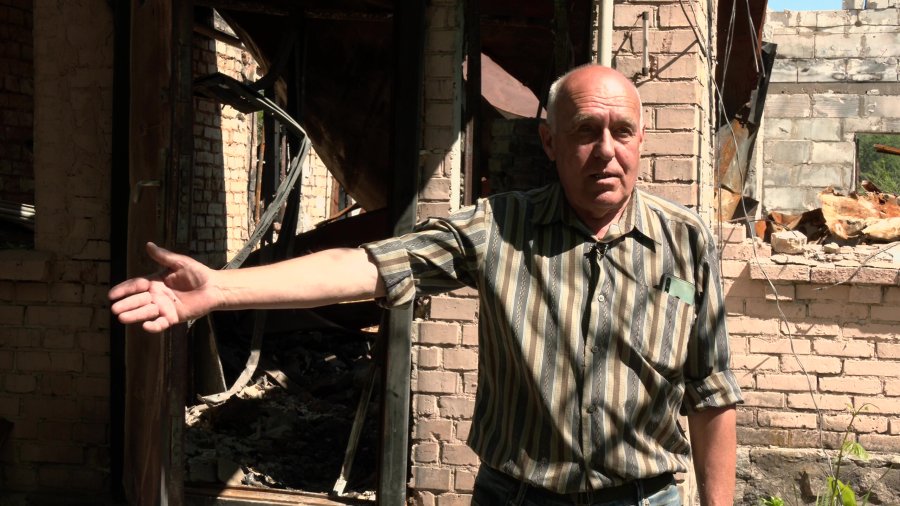 — I've thought about this since 2014 and felt they would go further. I didn't watch TV shows but read the news and compared all the facts. I knew they would invade further. So I told everyone that they would try.

— Were you preparing for war?

— Well, on 24 February we collected the suitcase with the essentials and documents. I still didn’t know anything about the war when I woke up. I found out when the helicopters started flying. Children and women stood and watched as they flew sideways. The Russian watched us with a machine gun. I urged fellow villagers from the street, telling them to run away and hide. Helicopters went to Gostomel. They threw bombs and intended to land troops. I counted about fifteen or sixteen helicopters. They first flew over the village and then over the forest.

— What were your actions?

— What were we doing? We took the beds down to the cellar. We had three families hiding in our cellar: my wife, daughter, son-in-law, grandson, and granddaughter. Everyone was there. Periodically, when there was no shelling, we would come out. Only I did not hide in the cellar.

— How often were the attacks?

— Frequently. And in the last few days, it was terrible. Women left, but we stayed. The guys helped the 72nd brigade, drove ammunition, blew up bridges, and I performed housework: made tea, this, and that. Drones flew day and night overhead. I slept in the house to the last.

— No, I did not think about evacuation. I wanted to pick up a weapon and fight them. Kill! I hate them.

In early March, Mykola sent his family to a safe place while he remained in the village.

— They started bombing hard. They fired GRADs [The BM-21 “Grad” is a self-propelled 122 mm multiple rocket launcher designed in the Soviet Union.] After that, friends came and took our families. First to Mironovka and later to Chervonohrad, near Lviv. We sent the families, but I remained.

— When was your house shelled?

— It was somewhere from the 4 to the 9 or 10 March. I went to Pushcha to work part-time. I would spend a day on duty, then go back home for three days. My friends would come to me with soldiers, and I made tea and coffee for them. I have a workshop behind my house. The first shell hit there, then the house and my brother's house. Next was the neighbor's house. It all happened in 10-15 minutes. Everything was on fire here. What hit us? I don’t know, but it instantly flared up and burned intensely. Well, what did I feel? Despair, anger. What could I feel? My children and grandchildren are now wandering around, staying with different people.

— Tell us about your house.

— It is a two-story house. What was there? Freezer, refrigerator, four TVs, boiler, bath, computer, laptop. My daughter loves to bake, so we had various household appliances for baking. We had everything that a typical family has. The house was full of technical equipment and tools, and most of it perished in the fire.

— Has the workshop survived?

— No, no! Some walls are standing, but nothing is left inside. It is empty.

— Tell us about the crimes of Russians against the civilian population.

— During the shelling, Sashko Topal was the first to be killed. He wanted to evacuate his mother and went to the car parked by the gates. There was an explosion, and  I saw him killed. I went and collected Sashko’s body with a shovel.

A shell exploded as Vasyl Vasylovich got out of the cellar. He was killed by shrapnel.

The Russians shot Kosteniuk. They entered the village, and he ran, so they shut him. They just executed him.

Slavko Shvets was hiding in the cellar. Russians killed him right there.

Down that street, they killed Mykola. We found him dead in bed. They must have entered the house and shut him.

When I came by my house, there were a lot of orcs [Ukrainian name for the Russian army] corpses. Further down the street, there were a lot of them. I came to take a picture of my mother-in-law's house, which was in the same condition as mine. I looked down as I walked in case there were booby traps. After taking a photo, I returned to feed the dog, and I saw the place was full of police. They called me because there was a dead orc, and I didn’t even see him when I came last time. I guess I didn’t look in that direction ...

I am unsure about the village as everything is broken here, but they stayed in the summer cottages. There were Buryats and Kadyrovtsy [Chechen fighters]. I know this because some people have seen them. I saw them.

— What plans do you have for the future?

— Rebuild, and live with children and grandchildren.

— Has your attitude towards the Russians changed?

— It changed for me back in 2015. My mother is Russian, and I have a cousin in Russia, in Saratov. She said in 2015 that she would come to protect me from our troops. So, I stopped talking to her after that.

— You still do not communicate with her?

— No! I don't consider them human! It's a horde! Worse than the hordes!