Russia destroys the centre of Mariupol to conceal its war crimes while leaving residents to die of the coldRussia reserves housing and warmth for its military and collaborators in devastated MariupolEven Kremlin supporters admit Russia has created ‘a humanitarian disaster zone’ in occupied Ukrainian cities Russia razes Ukrainian city to the ground and says ‘there’s no point’ to rebuilding it Russia killed Inna’s husband, destroyed her home and give awards to the killers for ‘liberating’ MariupolRussian invaders strip Ukrainians of their property rights in occupied Mariupol Russian invaders demand Ukrainians have ‘filtration’ stamps and permits to live in their own citiesRussia sends relatives of Ukrainian soldiers and other Mariupol residents to ‘concentration camp’ in occupied DonbasHorrific conditions and torture in Russian filtration camp ‘ghetto’ for Mariupol residents Hospital bombed by the Russians at Azovstal as more mass graves found near Mariupol Mass grave near Mariupol could contain up to nine thousand victims of the Russian invaders Russia plans total ‘filtration’ of Mariupol men and forced ‘mobilization’Russia destroys Mariupol and tries to get illegally deported residents to move to Siberia Russia accused of using mobile crematoria to hide its war crimes in Mariupol At least 50 Ukrainians were burned to death in Russia’s bombing of Mariupol hospitals Russian FSB produce ‘refugee’ propaganda video blaming Ukrainian soldiers for Russia"s war crimes in Mariupol Russia continues bombing Mariupol while producing propaganda videos about its ‘humanitarian aid’Russia responds to International Court order to stop bombing Ukraine by destroying Mariupol Theatre sheltering familiesRussian invaders take Mariupol intensive care hospital and its patients hostage Mass graves of the Ukrainian civilians Russia claims it is not killing
• Topics / War crimes 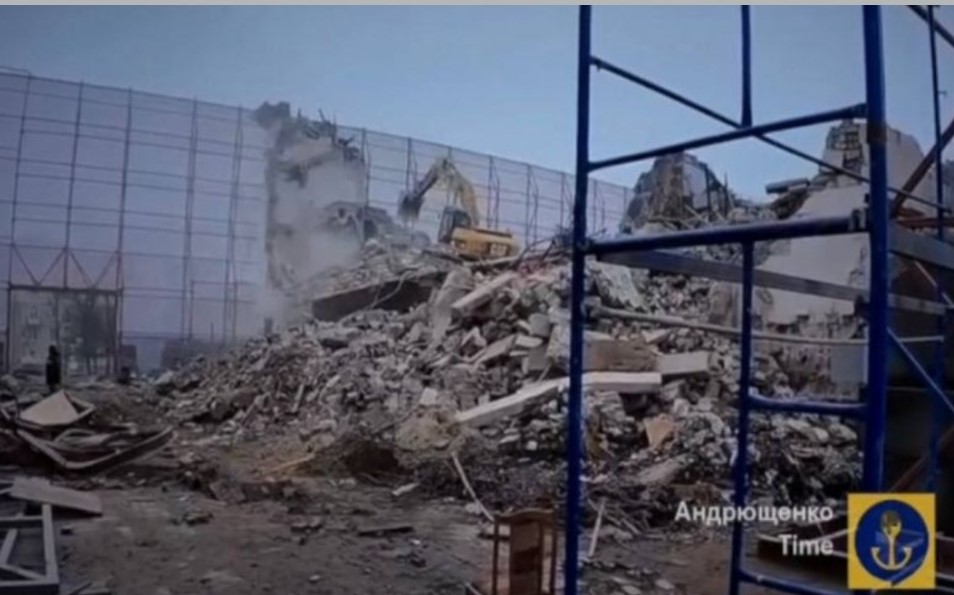 Mariupol’s Christmas in December 2021 was truly, and most poignantly, another world away.  In the video shared by Petro Andriushchenko, Adviser to the Mayor of Mariupol, you see the Mariupol Drama Theatre and city centre filled with light and music, and nothing to foresee the ‘Russian world’ devastation that Moscow was soon to bring.  Christmas 2022 brought Russia’s demolition of the Drama Theatre with the Mariupol authorities probably right in believing the demolition to be Russia’s latest attempt to conceal one of its most internationally known war crimes in Mariupol.  Russia is continuing to destroy “everything of historical value”, including the Drama Theatre which Andriushchenko calls “the very heart of Ukrainian Mariupol”,  with this part of its general genocidal efforts to deny and / or crush Ukraine’s identity as a separate, sovereign state.

Andriushchenko first drew attention to Russia’s demolition of buildings in Mariupol’s historical centre towards the end of November, with Maxar Technologies satellite images taken on 30 November confirming the demolition of dozens of high-rise apartment buildings.  The Maxar images also showed the Drama Theatre surrounded by ‘a protective screen’.  Such a screen could, in theory, be needed to protect the public from falling debris, but it did also serve another purpose, namely, to conceal the remains of one of Russia’s deadliest war crimes in Mariupol.

On 24 December 2022, Andriushchenko posted video footage of the demolition of the Drama Theatre.  “The demolition has ended, now they are simply throwing the memories of hundreds of thousands of Mariupol residents and the testimony to the genocide of Ukrainians onto the dustheap.”

He is in no doubt that Russia is trying to “conceal forever the physical proof of the worst single and deliberate killing of Ukrainians by the Russians since the beginning of this phase of the war. The occupiers do not even try to hide their intention, after all the back and central parts of the theatre are due for demolition while the front part will be left whole as “the basis of reconstruction.”  That is, they are demolishing only those parts of the building which prove the bombing and not the fictitious propaganda version about an explosion from inside”.

By 16 March 2022, Russia’s relentless bombing of the besieged city had already meant that the Donetsk Regional Drama of Theatre was no longer a vibrant cultural centre, but was being used as a bomb shelter for over a thousand civilians, most of them women and children.  There is no possibility that the bomber pilot(s) who dropped two massive bombs on the building were not aware that civilians were sheltering in the basement of the building. There were, after all, huge signs, in Russian, saying ‘CHILDREN’, both in front of and behind the theatre. 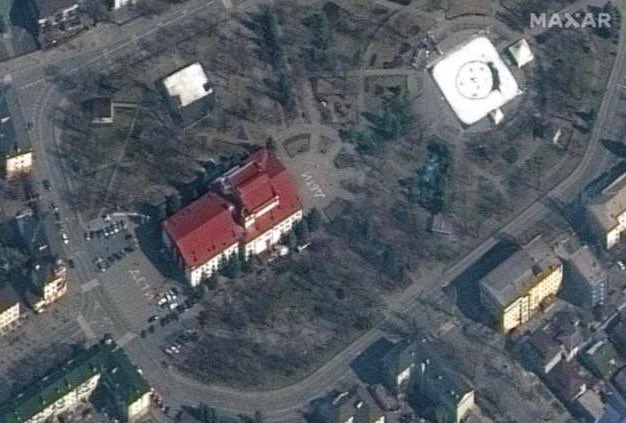 The attack was carried out shortly after the UN’s International Court of Justice ordered Russia to immediately suspend all military operations in Ukraine.  It is possible that dropping bombs on children and other civilians does not count as a ‘military operation’, but there is no chance that the Court’s ruling was not intended to also preclude such atrocities.

The Mariupol city authorities speak of over 300 civilians killed in the bombing.  Associated Press, whose Ukrainian photojournalists were present in Mariupol throughout March, suggested that the figure might be as high as 600.  Amnesty International later concluded that “the Russian military likely deliberately targeted the theatre despite knowing hundreds of civilians were sheltering there on 16 March, making the attack a clear war crime.”

Russia has been targeting civilians and committing clear war crimes since the beginning of its full-scale invasion.  Where these hit the world headlines, Moscow reverts to various strategies, from shouting ‘provocation!’, to trying to fiddle the facts, deploying Internet trolls and / or FSB repression.  One of the reasons for forcibly deporting so many Mariupol residents to Russia was, almost certainly, for the FSB to obtain fake ‘testimony’ claiming that Russia’s worst crimes, such as the bombing of the maternity hospital in Mariupol on 9 March and then the Drama Theatre on 16 March were somehow the work of Ukrainian defenders.  Such ‘testimony’ is generally garbled and makes little sense, which is hardly surprising as it flies in the face of hard facts, backed by hundreds of witnesses, photographic and video evidence.

It is less evident that Moscow is genuinely concerned about such evidence.  Inside Russia and in occupied Crimea, those few courageous individuals who publicly speak of Russia’s atrocities, like Alexei Gorinov or Ilya Yashin, can end up sentenced to 7 or 8 years, with this frightening many others into silence.  People in western countries cannot be muffled so easily, yet so what, if governments at present confine themselves to statements of outrage and sanctions which do not hit hard enough?   An international tribunal is needed now, with power to do more than issue orders that Moscow can ignore with impunity.