Russia killed Inna’s husband, destroyed her home and give awards to the killers for ‘liberating’ MariupolRussian invaders strip Ukrainians of their property rights in occupied Mariupol Russian invaders demand Ukrainians have ‘filtration’ stamps and permits to live in their own citiesRussia sends relatives of Ukrainian soldiers and other Mariupol residents to ‘concentration camp’ in occupied DonbasHorrific conditions and torture in Russian filtration camp ‘ghetto’ for Mariupol residents Hospital bombed by the Russians at Azovstal as more mass graves found near Mariupol Mass grave near Mariupol could contain up to nine thousand victims of the Russian invaders Russia plans total ‘filtration’ of Mariupol men and forced ‘mobilization’Russia destroys Mariupol and tries to get illegally deported residents to move to Siberia Russia accused of using mobile crematoria to hide its war crimes in Mariupol At least 50 Ukrainians were burned to death in Russia’s bombing of Mariupol hospitals Russian FSB produce ‘refugee’ propaganda video blaming Ukrainian soldiers for Russia"s war crimes in Mariupol Russia continues bombing Mariupol while producing propaganda videos about its ‘humanitarian aid’Russia responds to International Court order to stop bombing Ukraine by destroying Mariupol Theatre sheltering familiesRussian invaders take Mariupol intensive care hospital and its patients hostage Mass graves of the Ukrainian civilians Russia claims it is not killingTerror and abductions as Russia tries to break Ukrainian resistance in Kherson and other occupied citiesUkrainian journalist Oleh Baturin feared abducted by Russian invaders in Kherson oblast Mayor of Melitopol Ivan Fedorov abducted after refusing to collaborate with the Russian invaders Russian priest arrested and prosecuted for sermon opposing Russia’s war against Ukraine
• Topics / War crimes 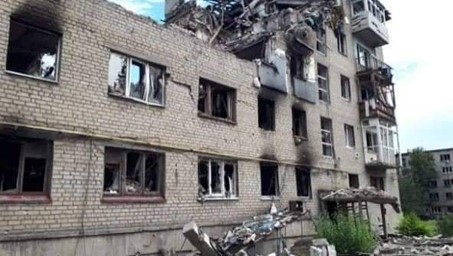 Although Russian propaganda media continue to assert that life is returning to normal in the cities Russia has destroyed in order to seize, the reality is quite different. Russia’s proxy ‘Luhansk republic’ [LPR] has already stated that “there is no point” in trying to rebuild Popasna, a city in Luhansk oblast which became known beyond Ukraine for Russia’s savage methods of warfare, including the apparent beheading of a Ukrainian soldier.

Before Russia’s full-scale invasion, this city, close to the frontline, had a population of over 20 thousand.  Russia’s attempts to seize the city began in the middle of March, and ended with the Ukrainian Armed Forces’ retreat on 7 May.  It is believed that Russia used both Wagner Unit mercenaries and ‘Kadyrovtsi’, the forces linked with the brutal Kremlin-installed leader of Chechnya, Ramzan Kadyrov.

A lot of the evidence of Russia’s scorched-earth war tactics and of horrific crimes have initially come from Russian or ‘pro-Russian’ sources.  On 5 May, CNN posted drone footage which they said had come from a pro-Russian Telegram channel.  In his comments, Serhiy Haidai , Governor of the Luhansk oblast, was quoted as saying that the Russians are not just destroying Popasna, but are wiping it off the map of Luhansk oblast.  In the centre of the city, all buildings have either been destroyed totally or badly damaged, with most seemingly hit by Russian artillery or rocket fire.  CNN notes that the drone may have been used to help the Russians find the last Ukrainian defenders, with the Russians seen hunting down Ukrainian soldiers trying to hide inside a shed, and a Russian hurling at least four grenades into or near the shed. 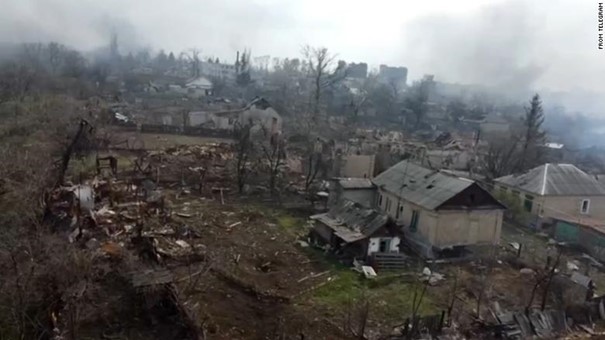 Popasna Image from the Russian military drone posted by CNN

Although the drone shows Ukrainian defenders being taken away, with their hands on their heads, a chilling photo posted by Serhiy Haidai on 5 August suggests worse atrocities. The photo shows what appears to the impaled head and hands of a Ukrainian prisoner of war outside a house in Popasna. While the scene cannot be checked while Popasna remains under Russian occupation, geolocation tests suggest that the location is that shown on the photo.

Russia and its proxy ‘Luhansk republic’ claim that they have ‘liberated’ Popasna, and initially promised to rebuild it “even more beautiful”.   By 9 August, that had changed with Kremlin-installed ‘LPR leader’ Leonid Pasechkin saying that “there’s no particular point” in rebuilding the city which is virtually totally destroyed.

Haidai commented that “the Russians don’t have the promised victories at the front, are losing faith in their occupied cities that for months they can’t begin rebuilding.”  It is two months until the heating season, he warns, and the invaders have done nothing over the last months in any of the cities that they have seized, and could now not even possibly have time.

The devastation that the Russians caused to Sievierodonetsk and neighbouring Lysychansk is also massive.  According to Haidai, as of the end of July, Sievierodonetsk had no water, gas or electricity.

Haidai has also reported that in Sievierodonetsk, as in Mariupol, makeshift ‘showers’ have been established in the street, due to the lack of running water in most apartments.   While it has been Mariupol, the Russian bombing and the subsequent epidemic fears due to bodies unburied, that have received most publicity, the situation is not much better in Sievierodonetsk, which was also subjected to relentless strikes.

The situation in Mariupol is particularly dire with 90% of the infrastructure destroyed. The Mayor of Mariupol Vadym Boichenko warned on 11 August that there has been no safe drinking water under Russian occupation and will not be, since the Russians have destroyed the fresh water supply from Siversky Donets.  Millions will be needed to reinstate this.  Instead the occupiers are using water from the Stary Krym reserve, but this is technical water and will, in any case, only be sufficient for some nine months. In addition, the pumps for getting the water out have been flooded, with this also requiring up to two years work.  Boichenko warned that the situation with electricity is also “catastrophic”.

An additional, and inevitable, problem would appear to be corruption, with the Mariupol City Council reporting also that there are increasingly conflicts between different groups of the occupiers, all trying to syphon off the money being sent from Russia.  Instead of the 2,500 packets of humanitarian aid envisaged, for example, they provide only 2,000, pocketing the difference.

For two days, city sanitation workers have refused to work and are demanding to finally be paid.  These are Ukrainian workers who expect to be paid and who are not afraid to protest.

There are, however, Russian workers who have been promised double the pay they could get in Russia and have come to occupied parts of Donbas.  Typically, these produce ‘appeals to Russian President Vladimir Putin’.  Moscow sanitation workers, for example, made just such an appeal, saying that they had been sent on a work trip by Mosvodokanal to the city of Shchastia in Luhansk oblast.  They had not, despite their demands, been given any contracts, and are now not being paid.

Instead of trying to rebuild what they have destroyed, Russia is focusing on propaganda methods – the large screens erected in the centre of Mariupol, Potemkin apartment blocks, etc., and on preparation for entirely fake ‘referendums’.  Moscow plans to claim that people whose families they have killed and whose homes and livelihoods they have destroyed ‘voted’ to join Russia.