Young Crimean sentenced to 3 years after ‘confession’ almost certainly extracted through torture Young Crimean Tatar likely tortured into ‘confessing’ to anti-war protest Imprisoned in occupied Crimea for opposing Russia’s war against Ukraine Ukrainian seized and sentenced in Russian-occupied Crimea for pro-Ukrainian social media commentsArtist disappears after arrest for pro-Ukrainian anti-war protest in Russian occupied Crimea Crimean teacher dismissed and threatened with prosecution for telling students the truth about Russia’s war against UkraineRussia installs its propaganda TV after seizing Kherson and imposes 15-year sentences for reporting its invasion of UkraineUkrainian survivors of the Holocaust demand Putin and Russia get out of Ukraine Russia continues its carnage, flouting binding order from ECHR to stop bombing civilians in UkraineBabyn Yar bombed by Russia, 80 years after Nazi Massacre of Ukrainian Jews Russia proposes 15-year sentences and threatens "treason charges" for telling the truth about its war crimes in UkraineRussian schoolchildren told that Russia is bombing and killing Ukrainian children in ‘self-defence’ Putin miscalculated. Russia is fighting “an army of 40 million Ukrainians” Chief Rabbi of Ukraine demolishes Putin’s excuse for Russia’s invasion Russia bombs a Ukrainian kindergarten and apartments in its war against independent Ukraine Putin will continue attacking until Russia is stopped. Help Ukraine defend its freedom today!Russian Rule of Lawlessness in Occupied Crimea and DonbasRussian propaganda media and ex-President guilty of direct incitement to genocide in Ukraine, report findsChildren trained to be ‘Putin’s faithful soldiers’ in Russian-occupied Crimea Despite Russia admitting to terrorism against Ukraine, OSCE will not expel it
• Topics / War crimes
• Topics / Human Rights Abuses in Russian-occupied Crimea 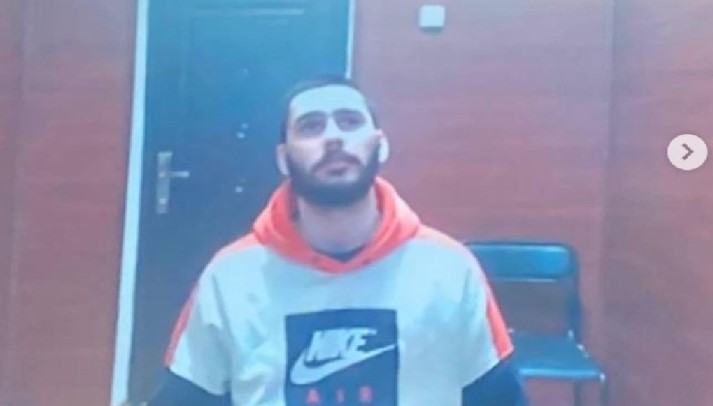 Bohdan Ziza by video link from the SIZO in occupied Simferopol 28.12.2022 Photo from the Instagram support group

The ‘trial’ is beginning in Rostov (Russia) of Crimean artist Bohdan Ziza (Azizov) on ‘terrorism’ charges which are probably based solely on a ‘confession’ extracted through torture.  The Instagram Bohdan Ziza support group reported on 28 December 2022 that a preliminary hearing has taken place in Rostov-on-Don, with Bohdan Ziza’s detention extended for a further six months.

Ziza took part in this ‘hearing’, via video link from the SIZO [remand prison] in occupied Simferopol, however is being moved, illegally, to Russia.  The first hearing on the actual charges is scheduled for 10 January 2023.

The support group posted a photo of the young artist, who turned 28 on 23 November 2022 in custody. It was the first photo since the FSB and Russian propaganda media posted video footage of Ziza’s supposed ‘confession’.  The group also passed on his comments after the hearing, quoting him as saying:

“I’m always curious what goes on in the heads of the judges, of all those present at the hearing.  This time there was no question what game the prosecutor was so absorbedly playing on his telephone throughout the entire hearing, raising his head only once.  They’re all indifferent. I don’t even begin to count on a fair trial.”

The group adds that Ziza does not recognize occupation ‘courts’ and considers his prosecution politically motivated, with this the position that he will maintain during the ‘trial’.

As reported, Ziza disappeared in May after the building of the occupation Yevpatoria administration building was daubed with paint in the blue and yellow colours of the Ukrainian flag during the early hours of 16 May. Later that very day, the Russian-controlled Crimea-24, channel published a video with Ziza’s supposed ‘confession’, in which he expressed ‘sincere apologies’ and said he was willing to face due punishment.  The young man looked extremely distressed and there is every reason to believe that he was speaking under duress.  The FSB in occupied Crimea are notorious for using torture to extract videoed ‘confessions’ and for preventing those in their custody from seeing independent lawyers. In virtually every case where a person has later received access to a real lawyer, they have retracted such ‘confessions’ and described the torture used to obtain them.

In this case, there is a question mark over the actual ‘offence’ with which he is charged.  There is clear evidence that the administrative building was daubed with paint, but this alone would warrant, at most, criminal charges for vandalism.  It is telling that the headline of the Russian-controlled media report reports only that “the vandal who daubed paint over a historic building in the centre has been detained.”

Ziza’s ‘confession’ is suspect also because of the language used.  He refers, for example, to the ‘special military operation’, Moscow’s euphemism for its war of aggression against Ukraine.  Ziza had, reportedly, not been politically active before the full-scale invasion, but made his outrage over Russia’s aggression very clear in this video, and he would not have voluntarily used such terminology.

On 17 May 2022, Graty reported that a local pro-Russian blogger, Alexander Talipov had posted another video, claiming that Ziza had videoed his protest on his telephone and posted the video, having used a distorted voice.  The voice was supposed to have said the following: “A terrible war is underway, which Putin unleashed and which the state propaganda machine is trying with all its might to convince the people is OK. It is trying to convince them that there is no need to do anything, that they should sit silently and watch, expect that nobody can do anything. But it is very important now to go out onto the street and express your protest so that those who are against this war, those who are sitting at home and afraid to express their opinion see that they are not alone.  There are a lot of us. And there are more of us than of those who support this war. However they have taken away this possibility, taken away the chance of coming out in the day, but we can come out at night. I call on everybody to come out at night onto the street and express their protest.”

The video shows a person with his face covered pouring first blue, then yellow pain on the administration building door.  The door opens, with the guard shouting (more or less) “what the fuck are you doing?”.   The person does not go away, but lights a Molotov cocktail and throws it at the door, before running away.  The guard is no longer visible.  Talipov refused to answer Graty’s question as to how he had come into possession of the video.

If the video is genuine, then it is unclear why Ziza was not arrested then and there.  Instead, it was reported that he had been identified because of CCTV footage.

Even if Ziza had thrown the Molotov cocktail at a building which would have been empty during the night, this would not necessarily lead to the kind of charges that Ziza is now facing.  The severity is reminiscent of the first Russian Crimean show trial of Ukrainian filmmaker Oleh Sentsov and three other opponents of Russia’s invasion and very likely because of Ziza’s open opposition to the war.

There are, in addition, suspicious similarities and differences between the arrests of Ziza and of another young Crimean, Aziz Faizullaev.  He probably also ‘confessed’ to a similar Molotov cocktail incident under torture, but did not face ‘terrorism’ charges (details here).

By 20 May, the FSB had accused Ziza of an ‘attempted terrorist attack’, claiming that the petrol bomb had gone out and not caused a fire through circumstances beyond the suspect’s control.  It was then reported that this carried a sentence of up to 15 years.

On 23 November, the Ziza support group reported that, on the artist’s birthday, the prosecution had added two new ‘terrorism’ charges, with four now in all. Ziza s accused of ‘carrying out a terrorist act’ (Article 205 § 1 of Russia’s criminal code, illegally applied in occupied Crimea); ‘the threat of carrying out a terrorist act’ (Article 205 § 1); Article 205.2 § 2 ‘calling to carry out a terrorist act’ and Article 214 § 2 ‘vandalism for political motives’.  It is only really the last, most minor, of the charges for which there seems clear evidence. There are plenty of photos of the daubed paint, none of the Molotov cocktail, or any damage caused.

The group pointed out Russia was bringing such absurd charges against a person who had spoken out for peace while engaged in mass attacks on Ukrainian critical infrastructure, leaving people without electricity, water and communications and killing innocent civilians.

In October, the group posted the following letter from Bohdan Ziza.

“Humiliation, beatings and torture.  The lack of fundamental rights. The constant sense of defencelessness and fear. The obsessive wish to find myself in some other, safer place. You might think that I’m writing about being in the SIZO, but not entirely. Life in Russia has long become similar to prison regime. Freedom of speech in this country is a very expensive pleasure. Sometimes it can cost you your freedom. However, silence at present costs even more, it takes away lives, it cripples people’s fate; and this is about millions. Each person who fails to publicly speak out against this war, who does nothing to stop it, is a passive accomplice in this horrific crime which the Russian regime is committing.  I decided to at least do something to express my opposition.

How much did they pay you? Were you drunk? Are you really so ideological?  The questions that I periodically hear addressed at me. Their cause is elementary intimidation – the main weapon in the hands of the Russian regime to stifle civic position among the population and a sense of responsibility for the decisions that the country’s leadership are taking. It is barbarism that we are watching a war of such magnitude in our time. It is barbarism that we do nothing to try to stop it. After all, I am not being tried for some paint and a petrol bomb.  They want to put me away for my words, for my position which is inconvenient to the occupation regime in Crimea.

However no money, no threats or torture will force me to change my views. I’m tired of being afraid. I don’t want to run away in search of a better place to live. I want my native home to be this.

My home is Crimea.

My home is Ukraine.”

We can only reiterate Bohdan Ziza’s friends’ plea to circulate the letter and information about his imprisonment and politically motivated ‘trial’.