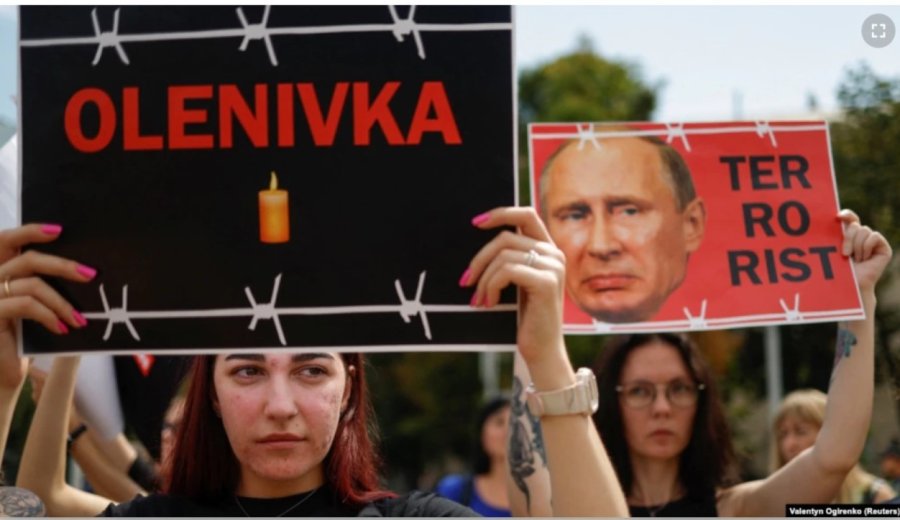 Relatives of Azovstal defenders holding a picket in Kyiv on 30 July, demanding an investigation into the killing of POWs at Olenivka and for Russia to be declared a terrorist state Photo Valentyn Ogirenko, Reuters

UN Secretary-General Antonio Guterres has effectively confirmed that no investigation will be carried out into the violent deaths of a huge number of Ukrainian prisoners of war held at a notorious prison in occupied Olenivka where Russia is holding both POWs and Ukrainian civilian hostages.  A spokesperson for the Secretary-General stated on 5 January that the ‘fact-finding mission first announced on 3 August 2022 had now been dissolved.

Although three members were actually named, the mission essentially existed only in press headlines.  The latter have, as feared, proven frustratingly misleading.  All followed the UN in stating that both Ukraine and Russia had asked for such a mission. This was even repeated on 5 January 2023, without any mention of the fact that Olenivka is under Russian occupation, and that it was Moscow back in August 2022 and since who needed to ensure the “conditions required for the deployment of the mission to the site.”  Ukraine had no reason to kill its own prisoners of war and all grounds for wanting the crime investigated.  While probably true that the war might now make it hard to guarantee a fact-finding mission’s security, that was not the case during the first month or more after the fatal explosion, when it was imperative that investigators searched for material evidence and spoke with other prisoners of war.

It is over five months since the International Committee of the Red Cross reported its request of access to the other prisoners present at the time of the attack.  Although ICRC has since mentioned visiting an undisclosed number of Ukrainian and Russian POWs, there is nothing at all to suggest that they have been given access to the Olenivka prison which Russia has turned into an effective concentration camp.

Both the UN and ICRC stress the need for “full respect for international humanitarian and human rights law including the protection and treatment of prisoners of war”. Yet Russia has not provided ICRC with access to prisoners at Olenivka, as demanded by the Third Geneva Convention.  In December, ICRC reiterated that it “must be granted unimpeded access to see all prisoners of war repeatedly and in private, wherever they are held.”

It is Russia that is denying such access yet neither the UN nor ICRC spell this out.  The claim that this is required from non-partisan bodies is difficult to take seriously in the case of the International Committee of the Red Cross given its failure to react to the clear pro-Russian bias shown by the Russian Red Cross.  The latter has, for example, taken part in the Russian propaganda campaign #МЫВМЕСТЕ [#WE’RETOGETHER.  In early October, it began collecting money for the families of Russians taking part in Moscow’s war against Ukraine. Other examples of such bias can be found here.

It was initially feared that the unexplained explosion at the Olenivka prison in the Russian proxy ‘Donetsk people’s republic’ had killed as many as 53 Ukrainian prisoners of war. Ukraine’s Prosecutor General’s Office now, reportedly, believes that 40 prisoners of war, held in Russian captivity, were killed on 29 July, and 130 injured.

For at least forty days, the families of Ukrainian defenders, including those from the Azovstal Steelworks in Mariupol, had no idea whether their loved ones had survived the horrific blast.

Had there been any evidence at all to back Russia’s claim that the explosion was caused by a HIMARS-launched Ukrainian missile, Moscow would have welcomed international investigators with open arms.  Instead, it blocked any examination of the crime scene and any contact with the survivors, while inviting former Hollywood actor, turned Kremlin apologist Steven Seagal for a propaganda trip.

Judging by attempts to use Ukrainians forcibly deported from besieged Mariupol for propaganda videos and / or ‘testimony’ blaming Ukraine’s Armed Forces for Russia’s crimes, it is quite possible that such ‘testimony’ will also emerge from Olenivka.

As reported, there have been several independent investigations by journalists or human rights groups which cast serious doubt over Russia’s claim that this was an external – Ukrainian – attack on Olenivka.  A correspondent for the Media Initiative for Human Rights spoke with witnesses soon after the tragedy.  They were adamant that there had been an explosion, not shelling. US journalist Christopher Miller tweeted Maxar satellite images from before and after “an attack that Kyiv says – and preliminary evidence suggests – Russian forces carried out”.   The damage visible on those satellite images, and from the videos posted by Russian propagandists, did not point to the involvement of any missile.

Investigations by the Guardian and Washington Post also pointed to discrepancies in Russia’s claims.  WP, for example, consulted six military experts who said that the available satellite images of the destroyed building at Olenivka “appear inconsistent with a HIMARS-launched attack”.   The WP study also addressed, and appeared to provide evidence for, the allegations that the Azov defenders had been deliberately moved to the building shortly before the explosion.  WP cited a US intelligence report as suggesting that “Russia will fabricate evidence to pin the blame for the killings on Ukraine, including by planting ammunition from a HIMARS.”

Any such ‘evidence’ must be viewed in the context of Russia’s systematic obstruction of a real and independent investigation of the events on 29 July 2022.  The same is true of its ‘request’ to the UN to investigate which was almost certainly never intended to go beyond good propaganda headlines.