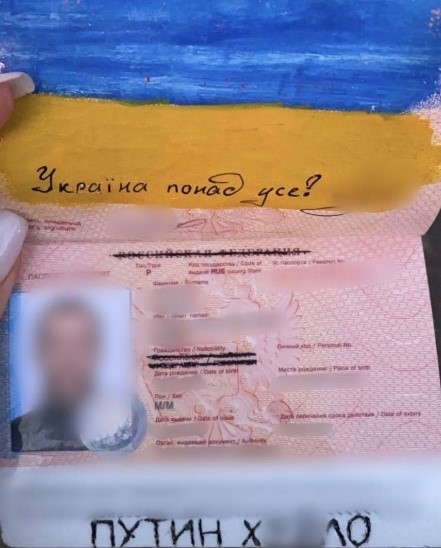 Roman’s passport which the Ukrainian authorities posted on social media, before trying to expel Roman despite near certain persecution in Russia

Ukraine’s Migration Service has ordered the expulsion of a young man who has lived in Ukraine for 15 years and is only unable to revoke his Russian citizenship because he would need to do this on Russian territory.  There he would, almost certainly, face persecution for his opposition to the war and support for Ukraine.  The situation is especially shocking as the Migration Service decided to forcibly deport Roman, after Ukraine’s Border Guard Administration posted a photo of the young man’s passport page, which he had painted in the colours of the Ukrainian flag and on which could be seen the words ‘Putin is a dickhead’.  Having thus placed Roman in direct danger from the current regime of Russian leader Vladimir Putin, Ukraine is now, in all seriousness, planning to deport the young man.

On 12 January, Roman’s lawyer, Oleksiy Skorbach posted the truly surreal video of his argument with Migration Service officials who had issued the decision to expel Roman and had, that day, refused to receive the documents on protection under the Law on Refugees and persons in need of additional or temporary protection.  They had furthermore, Skorbach noted, done this verbally, in breach of the rules of procedure. In one especially cynical moment, the official claims that Roman does not fall under Article 5 of this Law (which prohibits their forced extradition) since he had not applied for asylum 15 years ago!

As mentioned, Ukraine’s Border Guard Administration’s press service posted the photo of Roman’s passport on 5 January, prefacing the image with a short text beginning with the words: “Ashamed to be Russian: a man has painted his passport with the national symbols of Ukraine”.  They explained that border guard personnel had discovered the man, described as ‘a Russian’ who had overstayed in Ukraine in the Kyiv oblast and noted that the young man had painted Ukraine’s flag, with the words ‘Ukraine above all’ and ‘Putin – khuylo’ [the word for ‘dickhead’ is considered obscene in Ukrainian and was therefore written with some letters missing.  It was, further, stated that the page would be “studied” by the National Police.].  They pointed out also that the man had crossed out the place for ‘citizenship’ altogether.

While the photo is blurred, and no personal details can be read, it would be naïve to believe that the Russian authorities would not be able to identify this person who would, as a minimum, face likely prosecution under the draconian silencing legislation passed within days of Russia’s full-scale invasion of Ukraine.  Skorbach has confirmed that “the lad became so well-known that he was almost immediately singled out in Russia.”  He explains that Roman did not paint up his ‘Russian Federation passport’ like that on 24 February 2022 [the day of Russia’s full-scale invasion] just for fun.  He did it, he says, as a Ukrainian citizen who had lived in Ukraine for 15 years.  He was stripped of that citizenship by the Migration Service because he had not been able to formally reject his Russian citizenship, since that would have meant travelling to Ukraine.  KHPG has followed the persecution of other Russian citizens seized as soon as they crossed the border, and there is every reason to believe that Roman would face the same fate.

Roman has a small daughter who is a Ukrainian citizen.  He is also an ethnic Ukrainian whose father is a citizen of Ukraine. The Migration Service ignored all of this, as well as the evident danger Roman has now been exposed to by the Ukrainian authorities.

Skorbach is not alone in feeling anger and frustration that the Migration Service has learned nothing, even in the face of Russia’s open invasion. He adds that Roman had, in fact, several times tried to join Ukraine’s Territorial Defence after 24 February 2022, but was not accepted due to the unclear situation with his documents.

Perhaps the Migration Service refused to listen long enough to learn of that, but even this is, unfortunately, not guaranteed.  Back in 2021, Ukraine’s President Volodymyr Zelensky and the National Security and Defence Council imposed highly dubious ‘sanctions’, including against at least seven men who had defended Ukraine against Russia and its proxies in occupied Donbas.  The sanctions meant that the men faced deportation although all would have been in danger of immediate arrest, torture and long sentences if forcibly extradited to the Russian Federation.  It was only thanks to public outcry that the situation became known and the relevant authorities backed off.  At least one person who defended Ukraine in Donbas, Timur Tumgoev, was treacherously and illegally handed over to Russia in 2018, where he was soon sentenced to a horrific 18 years on trumped up charges. In general, Ukraine’s Security Service, Prosecutor General’s Office and Migration Service had for decades appeared unable to shake off Soviet habits of collaboration with their Russian ‘counterparts’.  This did not change even after Russia began its aggression against Ukraine in 2014 and, at least the Migration Service would indeed appear to be incapable of change.