90% of teachers in occupied Melitopol refuse to collaborate with Russian invaders Ukrainian kids from occupied Melitopol indoctrinated and enlisted in Russia’s ‘Youth Army’ Invaders threaten to take children away if parents don’t send them to be indoctrinated ‘to love Russia’ Teachers in occupied Kherson refuse to collaborate with Russian occupiers Russia uses terror and abduction in attempt to force schools to collaborate in occupied Melitopol Mayor of Melitopol Ivan Fedorov abducted after refusing to collaborate with the Russian invaders Russian priest arrested and prosecuted for sermon opposing Russia’s war against Ukraine Russia effectively admits it deliberately bombed the maternity hospital in Mariupol that killed three patients, including a childRussia brings grotesque propaganda to Berdiansk after Ukrainian journalists refuse to collaborate Russian invaders murder Ukrainian volunteers Impassioned appeal from Ukrainian Muslim leader in face of Russia’s war to destroy Ukraine Russia is forcing Ukrainians from occupied Crimea and Donbas to fight in its invasion of Ukraine Children among the dead after Russian invaders opened fire on fleeing civilians Russia installs its propaganda TV after seizing Kherson and imposes 15-year sentences for reporting its invasion of UkraineUkrainian survivors of the Holocaust demand Putin and Russia get out of Ukraine Russia continues its carnage, flouting binding order from ECHR to stop bombing civilians in UkraineBabyn Yar bombed by Russia, 80 years after Nazi Massacre of Ukrainian Jews Russia proposes 15-year sentences and threatens "treason charges" for telling the truth about its war crimes in UkraineRussian schoolchildren told that Russia is bombing and killing Ukrainian children in ‘self-defence’ Putin miscalculated. Russia is fighting “an army of 40 million Ukrainians”
• Topics / War crimes 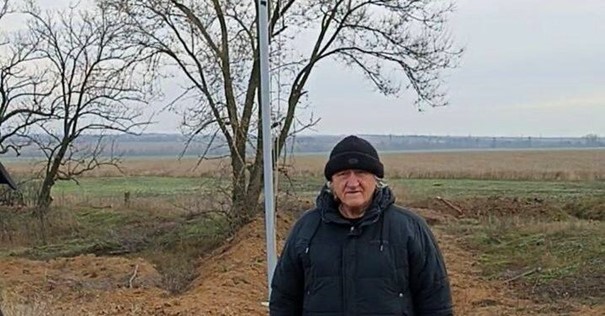 Viktor Udovychenko driven out by the Russian invaders for supporting Ukraine

Russia stepped up its methods of terror in occupied Melitopol (Zaporizhzhia oblast) following its forced retreat from Kherson and parts of the Kherson oblast.  Ivan Fedorov, Mayor of Melitopol, recently told Dzerkalo Tyzhnia that the Russians who had retreated from Kherson oblast to occupied Zaporizhzhia oblast “are behaving like animals”, abducting and raping civilians.  There has also been a sharp increase in looting.

All of the methods of terror – the enforced disappearances; the abductions; torture and ‘deportations’ began as soon as the Russians gained control of Melitopolt with no let-up since.  Probably quite the contrary, as the invaders and local collaborators feel vulnerable and react with anger to the ongoing resistance and passive opposition from the population.  Like with Kherson and other liberated parts of the Kherson oblast, the full scale of the terror applied will only become clear when the Russians are driven from Zaporizhzhia oblast. 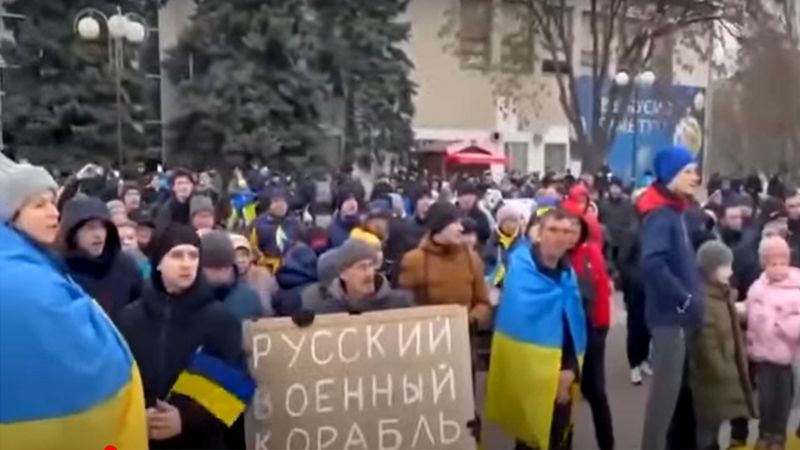 Melitopol earlier demonstration with one of the banners recalling the famous reply by one of the defenders of Snake Island ’Russian military ship, go fuck yourself’ Photo from Nashe Misto

The invaders have an evident problem with openly acknowledging resistance. Back in September, after all, Moscow staged a fake ‘referendum’ at gunpoint, and then claimed that virtually 100% of the population had ‘voted to join Russia’.  From time to time, the occupiers publish videos showing Ukrainians ‘deported’ from occupied territory.  On 10 January 2023, for example, the Russians ‘deported’ Viktor Udovychenko, former head of the Mykhailivka vocational college in the Zaporizhzhia oblast. videoing the farcical scene in which he was informed of his ‘expulsion’ and sent away.  This was essentially for supporting Ukraine and waiting for the Ukrainian Armed Forces’ liberation of Zaporizhzhia oblast, although Russian propaganda sources claimed that Udovychenko had collected money for the Armed Forces [“for Ukrainian nationalists”, according to their rendition], had assured collaborators that Ukrainian defenders would soon liberate the area, and had “tried to sabotage the education process”.  As the Ukrainian regional media RIA Melitopol noted, Udovychenko “was deprived of his home, his work and property for his faith in the return of Ukraine’s Armed Forces to Melitopol”.  It is, unfortunately, very likely that the Russians used much more brutal methods away from the camera, with these probably including torture.

The invaders began threatening to evict Ukrainians from their homes and ‘deport’ them from occupied parts of Kherson and Zaporizhzhia oblasts back in July 2022,  Such ‘expulsions’ were claimed to be for ‘extremist activities’, with the alleged ‘extremism’ being to support Ukraine and circulate accurate information about Russia’s invasion and the crimes it was committing.  Russia had encountered general opposition, with teachers and parents resisting attempts to force educational institutions to work according to Russian ‘standards’, etc. Such resistance clashed badly with Russia’s narrative to justify its full-scale invasion, hence the threats of consequences which were claimed to be ‘humane’.  By early October, Ivan Fedorov was reporting that these so-called ‘deportations’ were being carried out on a daily basis.  Fedorov mentioned a woman who had been held prisoner for a month and beaten because she didn’t know the Russian language and then deported.   On 7 October, Fedorov reported that two women had been deported. The first had been taken to the last checkpoint in Vasylivka and left there after the Russians found a plan for children studying online according to the Ukrainian curriculum on her telephone.  Another woman had been deported, and forced to walk to unoccupied Zaporizhzhia, after the Russians found a T-shirt with the Ukrainian flag.

That there is absolutely nothing ‘humane’ about such methods is also clear from the account given by a young couple of the torture they faced, before being ‘deported’.  The two, referred to by assumed names (Inna and Oleksandr) for safety, were seized by the invaders while posting patriotic messages around Melitopol.  Inna was held in a dark container for around nine days, in appalling conditions and with no food at all for the first three days.  She was held prisoner in total around six weeks, before she was taken away by car, with a bag over her head, understandably wondering whether she was being taken to be executed.  In fact, the invaders staged a videoed expulsion during which she was read out a ‘decision’ saying that she was being deported for so-called ‘extremist activities’ and being a ‘bad influence’.

28-year-old Oleksandr suffered more direct and savage torture, as did the men he was imprisoned with, all of whom had been seized for their pro-Ukrainian position. He too was ‘deported’ after almost exactly two months of imprisonment in horrific conditions and torture.

In the above-mentioned Dzerkalo Tyzhnia interview in late December, Fedorov t that 50-60% of Melitopol residents have left the city because of the danger,  An estimated 60 thousand people now live in the city which, before the war, had a population of almost 150 thousand.  The invaders are, of course, using them as an opportunity to move into empty apartments and, doubtless, plunder others.

The Mayor, however, says, that despite all the difficulties, Melitopol residents are continuing to hold ‘the defence’.  Not one doctor has gone to provide assistance to the Russian military hospital. 90% of educational workers have refused to collaborate with the self-proclaimed ‘authorities’, despite the Russians abducting the head of the Melitopol Department of Education Iryna Shcherbak and four school heads.  The invaders have been forced to bring in ‘teachers’ from Dagestan.  These unqualified individuals force the children to write ‘letters of gratitude’ to the invaders; to take part in festivities marking dates important for the ‘empire’ and sing both the Russian and the Soviet national anthems.  A lot of this is for appearances.  Of the 15 schools in Melitopol which the occupiers ‘opened’ on 1 September, four closed immediately for lack of either students or teachers.

See also: 90% of teachers in occupied Melitopol refuse to collaborate with Russian invaders

Fedorov notes that there are far more residents who are subscribed to a Ukrainian Telegram channel, than to a Russian propaganda one.  This is despite the danger of ending up flung into a basement [improvised prison] and tortured if the Russians find the Ukrainian channel on your phone.

Fedorov adds that the residents are most afraid that Russia will turn Melitopol into a second Mariupol.  Their city is a land corridor for Russia to occupied Crimea, and they will not just give it up.