Russia instals FSB man, other Russians to ‘govern’ occupied Kherson where the population hates themMayor of Kherson abducted after refusing to collaborate with Russian invaders Russian invaders torture abducted Kherson patriot into ‘confessing’ to surreal ‘abduction plot’ Tortured to death by Russia"s FSB for helping to defend Ukraine from the invadersTeachers in occupied Kherson refuse to collaborate with Russian occupiers Russia uses terror and abduction in attempt to force schools to collaborate in occupied Melitopol Mayor of Melitopol Ivan Fedorov abducted after refusing to collaborate with the Russian invaders Russian priest arrested and prosecuted for sermon opposing Russia’s war against Ukraine Russia effectively admits it deliberately bombed the maternity hospital in Mariupol that killed three patients, including a childRussia brings grotesque propaganda to Berdiansk after Ukrainian journalists refuse to collaborate Russian invaders murder Ukrainian volunteers Impassioned appeal from Ukrainian Muslim leader in face of Russia’s war to destroy Ukraine Russia is forcing Ukrainians from occupied Crimea and Donbas to fight in its invasion of Ukraine Children among the dead after Russian invaders opened fire on fleeing civilians Russia installs its propaganda TV after seizing Kherson and imposes 15-year sentences for reporting its invasion of UkraineUkrainian survivors of the Holocaust demand Putin and Russia get out of Ukraine Russia continues its carnage, flouting binding order from ECHR to stop bombing civilians in UkraineBabyn Yar bombed by Russia, 80 years after Nazi Massacre of Ukrainian Jews Russia proposes 15-year sentences and threatens "treason charges" for telling the truth about its war crimes in UkraineRussian schoolchildren told that Russia is bombing and killing Ukrainian children in ‘self-defence’
• Topics / War crimes 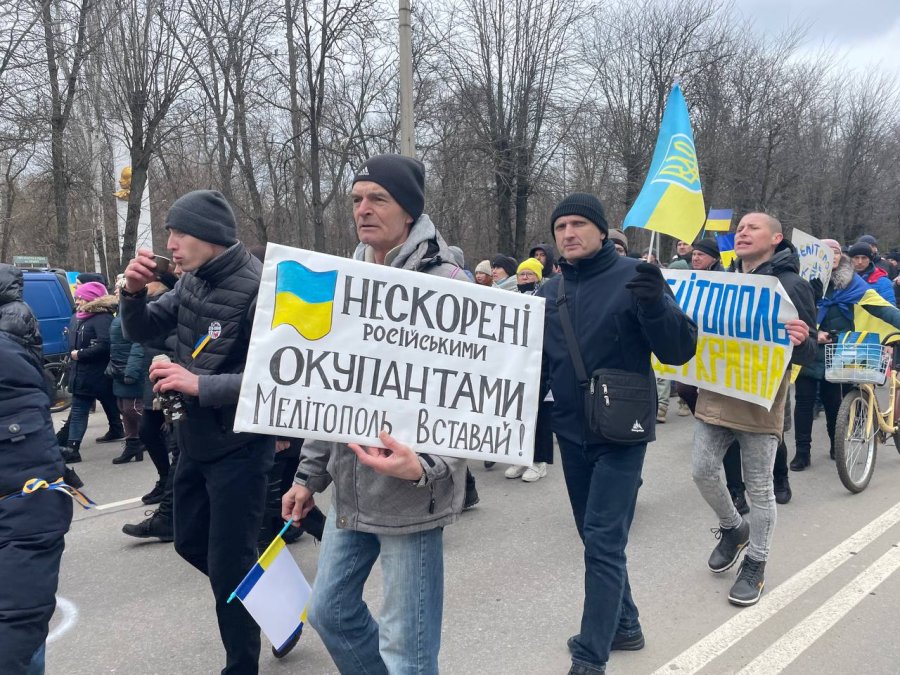 The Russian occupation administrations in the Kherson and Zaporizhzhia oblasts are threatening residents with eviction from their homes and expulsion from the area for what they term ‘extremist activities’.  By ‘extremists’ are meant Ukrainians expressing support for Ukraine and circulating accurate information about Russia’s invasion and the crimes it is committing on Ukrainian territory.

In a move so synchronized that it was clearly on Moscow’s orders, the Russian-installed ‘heads’ of the occupation administrations in both oblasts signed ‘decrees’ on 15 July which envisage the forced removal from the relevant area within 24 hours. In first reporting the move, Russia’s Interfax spoke simply of ‘extremists’ (without inverted commas), however the documents and comments from the Russian-installed collaborators leave no doubt as to the target.

The list of banned ‘extremist activities’ includes obstruction of the work of the Russian occupation ‘administrations’; what is referred to as the discrediting of the so-called occupation ‘authorities’ and the Russian armed forces; and the circulation of ‘knowingly false’ information about them.  The latter two items are copy-pasted from the law which Russia passed in blitzkrieg fashion on 4 March 2022.  The law, and the administrative and criminal liability it envisages, are being very widely used in Russia and occupied Crimea to prosecute people for openly criticizing Russia’s war against Ukraine and / or telling the truth about Russia’s military activities.  The ‘decrees’ are part of an arsenal of methods used on newly occupied territory to silence protest and terrorize the population, with these already including abductions, torture and killings.  Such methods have failed to suppress widespread opposition and unwillingness to collaborate with the Russian occupiers, and these have clearly proven an impediment to Russia’s plans to stage so-called ‘referendums’ on joining the Russian Federation.

It seems likely that the ‘decrees’ are in preparation for attempting just such a farcical ‘referendum’.  In reporting his ‘decree’, Edward Balitsky, the Russian-designated ‘head’ of occupied parts of the Zaporizhzhia oblast, specifically mentions “obstruction <> of referendum electoral commissions”, as well as “of educational and medical institutions.”  In all parts of Ukraine currently occupied, the Russian invaders are attempting to install ‘Russian standards’ in schools, and eliminate the Ukrainian language and Ukrainian identity.  They have thus far run up against opposition from teachers and parents, and are presumably hoping that the threat of expulsion will have more impact.

In comments to the Russian state-controlled RIA Novosti, Balitsky claimed that they were being “humane” and would not be applying “methods that Ukraine uses”. He did not clarify that second assertion, but did say that people would be forcibly deported to Ukrainian government-controlled territory.  There are grounds for doubting this since there have already been reports of the Russians making it dangerous to try to leave occupied parts of Kherson oblast.  Those abducted by the Russians, as well as a huge number of male residents of Mariupol are known to have been forcibly sent to so-called ‘filtration camps’ in occupied Donbas, or Russia.

Balitsky also reported another chilling ‘decree’ which he claimed to be “about strengthening measures of an anti-terrorist nature”, but which in fact simply installs Russia (and Soviet) encouragement of denunciations.  He stated the following: “Now if a person has not informed of a planned crime or knew that his or her neighbour, relative or acquaintance was engaged in extremist activities, even on the Internet, and did not communicate this information to the enforcement officers, s/he is equated with the person committing the crime. And also members of their family and other people who knew, participated, even failed to report the situation to the enforcement bodies will be expelled from the territory”.

The aim, in short, is to terrorize the population into silent subjugation.