Ukrainian kids from occupied Melitopol indoctrinated and enlisted in Russia’s ‘Youth Army’ Invaders threaten to take children away if parents don’t send them to be indoctrinated ‘to love Russia’ Teachers in occupied Kherson refuse to collaborate with Russian occupiers Russia uses terror and abduction in attempt to force schools to collaborate in occupied Melitopol Mayor of Melitopol Ivan Fedorov abducted after refusing to collaborate with the Russian invaders Russian priest arrested and prosecuted for sermon opposing Russia’s war against Ukraine Russia effectively admits it deliberately bombed the maternity hospital in Mariupol that killed three patients, including a childRussia brings grotesque propaganda to Berdiansk after Ukrainian journalists refuse to collaborate Russian invaders murder Ukrainian volunteers Impassioned appeal from Ukrainian Muslim leader in face of Russia’s war to destroy Ukraine Russia is forcing Ukrainians from occupied Crimea and Donbas to fight in its invasion of Ukraine Children among the dead after Russian invaders opened fire on fleeing civilians Russia installs its propaganda TV after seizing Kherson and imposes 15-year sentences for reporting its invasion of UkraineUkrainian survivors of the Holocaust demand Putin and Russia get out of Ukraine Russia continues its carnage, flouting binding order from ECHR to stop bombing civilians in UkraineBabyn Yar bombed by Russia, 80 years after Nazi Massacre of Ukrainian Jews Russia proposes 15-year sentences and threatens "treason charges" for telling the truth about its war crimes in UkraineRussian schoolchildren told that Russia is bombing and killing Ukrainian children in ‘self-defence’ Putin miscalculated. Russia is fighting “an army of 40 million Ukrainians” Chief Rabbi of Ukraine demolishes Putin’s excuse for Russia’s invasion
• Topics / War crimes 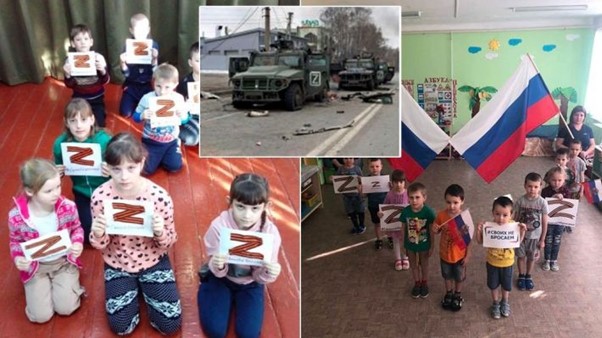 The ‘education’ that Russia is foisting on any part of Ukraine that falls under its control involves zombifying children and methods of terror against all those who oppose the so-called ‘Russian world’, including parents who do not want their kids to be brainwashed.  The methods are broadly those used in occupied Crimea since 2014, only now children whose lives have been shattered by an aggressor state are being forced into ‘thanking’ the soldiers who have brought death and destruction to Ukraine.

In a recent interview, Ivan Fedorov, Mayor of Melitopol (Zaporizhzhia oblast) mentioned such ‘letters of gratitude’ and other forms of indoctrination, but stated that some 90% of educational workers had refused to collaborate with the occupation regime.  The abductions and other forms of terror applied since March this year have clearly not achieved their aim and Russia has, reportedly, been forced to bring in teachers from Dagestan, in order, Ukraine’s National Resistance Centre puts it, “to Russify Ukrainian children”.  According to the Centre’s information, such teachers are promised increased pay and “benefits as participants in military action.”

Like in occupied Crimea, the Russians moved immediately to impose their propaganda media and ‘educational system’ in Melitopol and other occupied parts of the Zaporizhzhia and Kherson oblasts.  All such attempts, however, ran into considerable resistance from both teachers and parents.  Russia, typically, resorted to terror, abducting Iryna Shcherbak, Head of the Melitopol Department of Education and four school directors and trying to impose collaborators at gunpoint.  If Fedorov’s figures are correct, it would seem that all such measures have had minimal success.

Those few teachers from pre-school institutions who did agree to collaborate discovered that they had done so for absolutely pitiful remuneration, with the Russians saying that Ukraine was paying.  The Ukrainian authorities are, indeed, paying, in the sense that Ukraine’s Ministry of Education resolved that those teachers unable to work because of Russian occupation retain their jobs and pay, with these at least 2/3 of their full salary.  This would presumably not apply for those who voluntarily chose to collaborate with the aggressor state.

Parents have also proven unwilling to send their children to be told that the Russians who invaded their country are their ‘brothers’ and ‘liberators’, etc.  The Russians used various forms of coercion to force parents into sending their children to ‘schools’ following such a Russian curriculum, including threatening to strip them of their parental rights.  In September, RIA Melitopol cited residents as reporting that the invaders had burst into their homes if they learned that the children were studying online, according to the Ukrainian curriculum.   There are also attempts to block such Internet resources.  On 29 November, the National Resistance Centre reported further methods, with the Russians not only checking any children whom they found outside during school hours, but also using doctors brought in to provide information about children who were not attending the Russian-installed ‘schools’.

The invaders also check the phones of both children and their parents for the relevant apps, enabling participation in Ukrainian online education.

Like in occupied Crimea, the Russian education pushes a seriously distorted view of history, current events (including, of course, Russia’s war of aggression against Ukraine), ‘patriotism’, etc.  The Centre, for example, also reported that children were to be checked for their knowledge of the Russian national anthem.

Russia’s attempt to find students for the pseudo-universities that it tried to instal in Melitopol also encountered opposition.  The Centre reported on 18 October that the two main institutes in Melitopol had evacuated, with the majority of both lecturers and students going with them.   The fake institutes created in their place were willing to take anyone, without competition or exams, but had virtually no takers.  Perhaps the most shocking part of the coercion used was the threat, in the case of young men, that if they didn’t enrol in these fake institutes, they would be sent to fight Russia’s war against their compatriots.