‘War on four paws’ — personal battle of Serhii NebohaHis mother was shot, and the place of work was destroyed — Russian occupation harshly affected the life of Trostianets resident Serhii PentinShe said goodbye to life when the airstrikes made the houses collapse like a house of cards‘I believe the war will end soon, and everything will be fine’‘My husband and son were injured during an airstrike’‘I fell face down into the glass and covered my head with my hands’‘My brother and weakened mother were left in the middle of the street’ — stories from Izium‘In Sloviansk, we watched out of the window as people held up the train tracks with crowbars so we could pass through’ She was about to turn 53. A citizen of Trostianets speaks about his wife’s detention and murder‘Five people were killed there, including a pregnant woman’‘Grandfather was thrown a hundred meters away by the blast wave’‘There was nothing left of the neighbor, only shoes...’‘Cemetery in the garden, looting, and drunken soldiers’ — a resident of Borodianka spoke about the occupation’110 days in the torture dungeon — Anti Terrorist Operation (ATO) member talks about torture in the Kupiansk temporary detention center‘I remained in the occupation because I couldn’t leave my dog’We were allowed to go home on March 8th [International women’s day]. Russians kept residents of the Chernihiv region in the basement for a monthAlone with a gun against a pack of invaders‘When they saw planes, they fell to the ground…’‘If I die, then only in my homeland’ — a resident of Izium refused to evacuate to Russia
• Voices of war

‘I knew people who died in the basements of Borodianka...’ 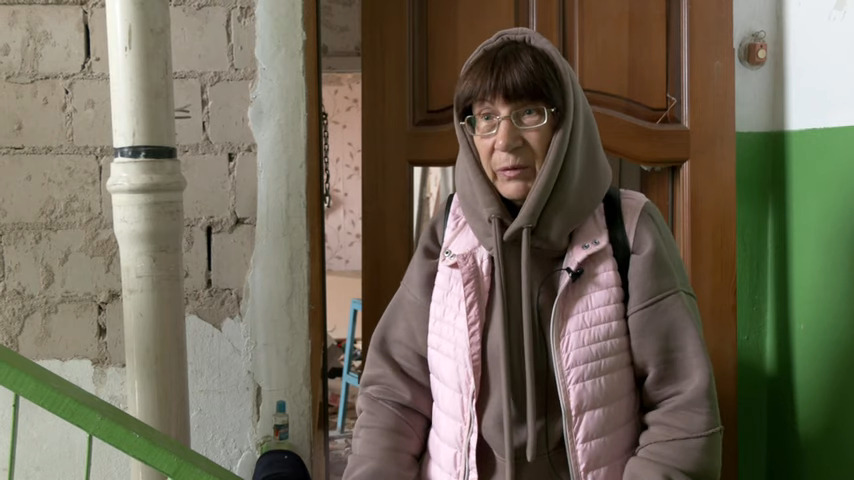 I am Torhonskaia Valentyna Fedorovna, and my date of birth is 15 December 1953. I have lived in this house in the thirteenth apartment since its construction. I lived alone and raised two children. It was hard, but slowly I bought things for the home. Finally, when I retired, the apartment had everything. And suddenly, such a misfortune hit our Borodianka.

— Did you expect a full-scale war?

— I didn't even think about it. I read the press and watched YouTube. They said there would be an attack on February 15, but I disagreed. No! How can this be? The 15th passed — and nothing. Then they said, on the 20th, and I thought: “Impossible!” So we waited, but on the 20 February, it was again nothing. However, on the 24th in the morning, the offensive began. It was a shock.

— How was the first day of the war?

— The eldest daughter called and said: “Mom, we were attacked. They are coming from Belarus towards us.” They went through the villages of Shybene and Berestianka and were supposed to go to Kyiv. But they were stopped there; they turned around and went to Borodianka. I didn't think they would go through us.

—When did the first military transport appear?

— They appeared on the 26th. They dropped a bomb and destroyed the house. Six people died there. Then they started going back and forth and shelling houses. At first, I was in the basement of another building: I lived in number 324 but was hiding in the 332. We sat there and heard automatic bursts on the street: “Knock-knock-knock-knock-knock….”

—Were you sitting in the basement around the clock?

— We used to go up during the day to change clothes and get food. And after six in the evening, we went down to the basement.

— No, I did not think there would be such a scale and air bombardments. That tanks will shoot at residential buildings. We have no critical strategic facilities in Borodianka, only civilian ones. So we could not imagine that they would destroy the civilian population. On 1 March, the light went out. The youngest daughter spent the night with me from the 27th to the 28th. How could she be in the basement with a small child? When the light went out, the eldest daughter brought the youngest to her house, where they cooked food and ate. The son-in-law was the coordinator: he stood on the balcony, counted the number of passing equipment, and passed it on to our military. He never went down to the basement. But that day, he received an urgent call and was told to come down. As soon as they hid in the basement, an air bomb hit a neighboring house. The first entrance was demolished, and their home was touched. They rushed out of the basement with two children and ran with other people into the fields. My son-in-law said that it was terrifying. The smell of war, everything is on fire and corpses... My daughter's car was parked near the house. It burned out. All that was left were the frame and wheels. The son-in-law's car survived because it was in the garage. He took the children, and they drove to the neighboring village of Zahaltsy. After the airstrike, I went down to the basement. But at about 8:10 pm, a rocket exploded near my building.

There was such a roar — words can not describe it. Such horror! The panels had risen, everything had crumbled, and nothing was visible. We were 12-15 people, and we thought that was all. We've been buried.

When it calmed down, we began to look for a way out. We had two exits on both sides. People got out and began to disperse, but my neighbor and I stayed because there was nowhere to run. We spent the night, and the children got in touch the next day and said they would contact Terroborona [Territorial Defence Force] to take me out. In the evening, one Terroboronite, Mishkin, came into our basement and began to call: “Is anyone alive? “Yes,” I answered. He picked us up, brought me to the children, and drove my neighbor to the kindergarten in Zahaltsy. There was a collection point from where people were taken further to the West. Here is such a story. I stayed there for three days, and then we evacuated to the Khmelnytsky region. My daughter and her husband and children left earlier by car for Zakarpattia. They spent a week there, then he took them to the border and returned to us in Teofypol. He has parents there. We were there for almost two months. Borodianka was liberated on 31 March – 1 April, and we returned on 27 April.

— What happened to your house?

— Oh, what can I say? The house you photographed was destroyed. I have damaged load-bearing walls on the fifth floor. The panel moved away, all things, furniture, absolutely everything was damaged. And what was left was stolen by marauders or others who were there. I gathered everything throughout my life, and now in my old age, I am homeless — no shelter, no fork, no spoon. We bought a little second-hand, and that's how we exist. I now live with my younger sister at Semashko 2. She is abroad with her daughter and two grandchildren. The younger sister lives in Germany, and her daughter lives in Italy. Where should I go when they return? I don't know where to live. 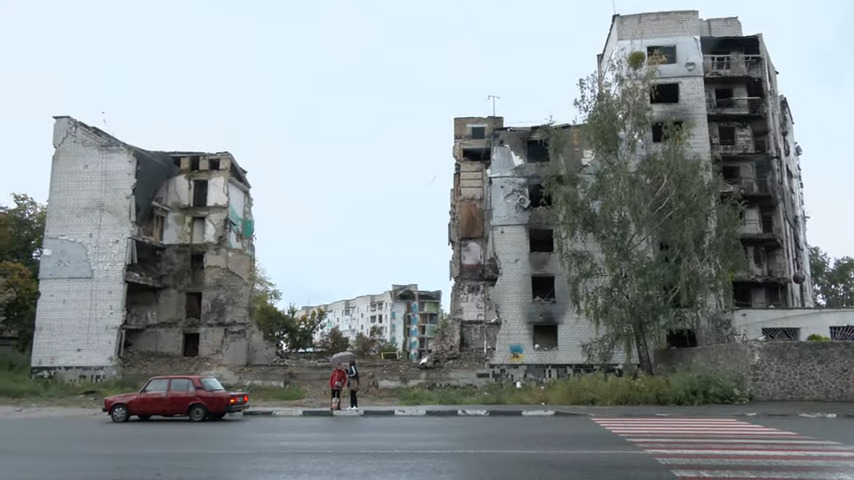 — What other crimes have the Russian military committed against civilians?

— I have heard about it but have not seen it in person. We were in the basement. We only heard how they were shooting, rolling transport back and forth. One house was blown up. My friend was in the basement on Semashko Street, and they said the man had been shot.

My daughter's classmate's father was shot while driving a car. He went to feed the dogs, and they shot him.

In the house next to my daughter’s, people were buried. I know those who died in that basement. Artem from a neighboring two-room apartment went missing, and no one knows where he is. His grandmother lived in the 371st house, which has two entrances missing. They also looked for her, but she likely died in the basement. I guess Artem could have been with her.

— What are you planning to do next?

— Keep on living, but I don’t know which doors to knock on. Where to live? Where to look for housing? Where? I don't know. Investors come, they say - give us money, and we will find someone to build, but money is spent quickly. How much we are at war with the local authorities! We have an acting officer. Before the war, the acting head was removed, leaving an interim leader. However, during the occupation, he did not even evacuate people. He just ran away, and now he walks around and meets delegations asking for money.

— Yes! It has changed a lot. They are non-humans with whom it is impossible to talk. I had a friend from Khabarovsk. She lived here with her husband for over twenty years. He was from Borodianka and died five years ago. In the summer, they came here for three or four months. She saw us and our attitudes: no Bandera, nothing evil! Now she lives in Khabarovsk. She called me.

I said: “Listen, why don't you protest? Our houses have been bombed.” And she: “No, we are for Putin.”

I said, “Lyuba, I will not communicate with you after this conversation. I don't want to know you. Don't call or text me.” Then she again began to repeat various information: this is America, this is NATO. If they had not attacked, NATO would have attacked them. I do not use swear words, but I swore at her! I said: “I don’t know you! You are dead for me!” This is how I feel about Russians who support Putin. There are, of course, people who support us, but for the most part, they are like her.

This publication is made possible by the generous support of the American people through the United States Agency for International Development (USAID) under the Human Rights in Action Program, run by the Ukrainian Helsinki Group on Human Rights (UHSHR).

The views and opinions expressed in this publication do not necessarily reflect the views of USAID, the US Government, or UHSHR. The authors and KHPG are solely responsible for the content of this article.

USAID is one of the world's leading development agencies facilitating the end of extreme poverty and supporting the movement of recipient countries to self-reliance and resilience. USAID also contributes to the national security and economic well-being of the United States. Its activity is a manifestation of the philanthropy of the American people. USAID has been partnering with Ukraine since 1992: during this time, the agency's total assistance to Ukraine amounted to more than 3 billion US dollars. USAID's current strategic priorities in Ukraine include strengthening democracy and good governance, promoting economic development and energy security, improving health systems, and reducing the impact of conflict in the eastern regions. For more information about USAID's activities, please contact the Public Relations Department of the USAID Mission in Ukraine at tel. (+38 044) 521-57-53. We also invite you to visit their website: usaid.gov/ukraine or the Facebook page: facebook.com/USAIDUkraine