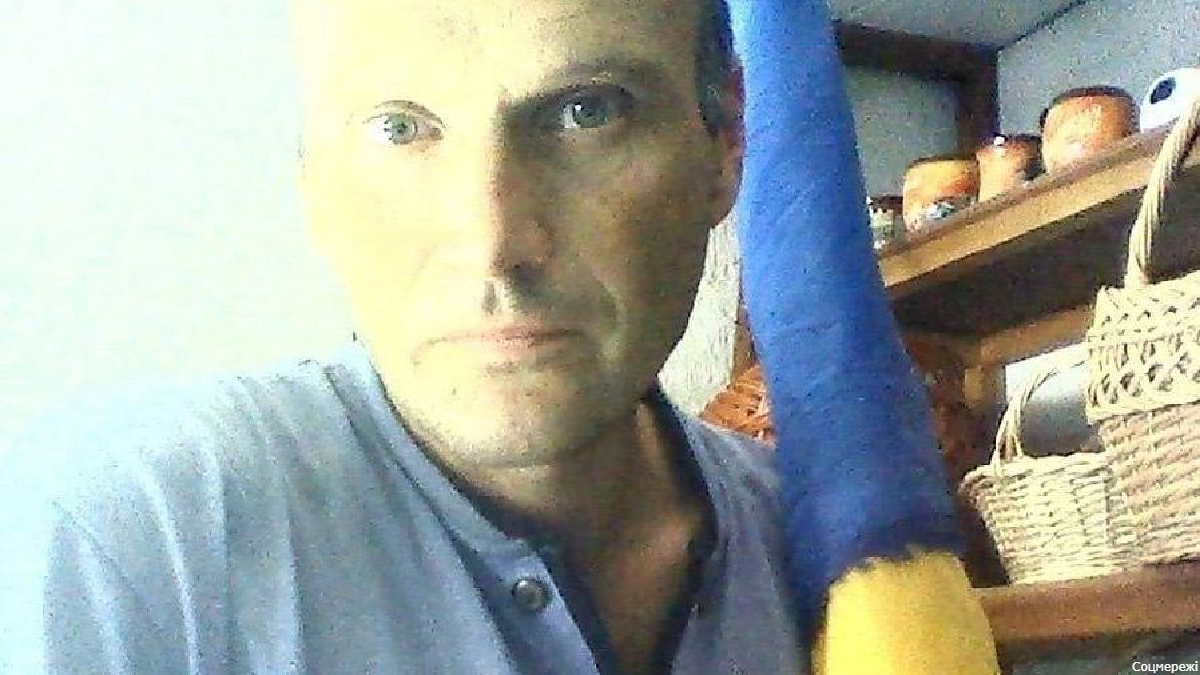 Andriy Bielozierov is under house arrest in occupied Crimea, facing preposterous criminal charges of ‘discrediting the Russian army’, although it is Moscow and its soldiers who discredit Russia by bombing and killing civilians.  He has already lost his job as a lecturer, been beaten by enforcement officers and spent two brief terms of imprisonment for Ukrainian songs and could now be imprisoned for up to five years for telling the truth about Russia’s war against his native Ukraine.

Bielozierov is facing charges under Article 280.3 § 1 of Russia’s criminal code, an article hastily adopted within days of Russia’s full-scale invasion of Ukraine.  This punishes for something termed ‘repeat discrediting of the Russian army’.  It is claimed that the 45-year-old did this through a post on the social network VKontakte on 9 October 2022.  In it, he wrote the following: “the Russian Federation’s armed forces bombed innocent Ukrainian children and woman in Donbas for 8 years, turning cannons from the frontline in the direction of Donetsk, and over the past half a year the RF armed forces are again bombing Ukrainian citizens and killing Ukrainian residents.”

The first charge under Article 20.3.3 was in September over the Ukrainian song by Taras Vorovok about the many uses of Bayraktar drones against the Russian invaders. He can be seen here listening to the song on his laptop, with a few of his students walking around.  He later explained that he had replied to questions from students about ‘the events’ taking place.  On this occasion, four or five students had come up to him during the break and asked him how a drone works. He had opened up his laptop and typed in ‘Bayraktar’ on Google.  The song certainly puts a certain slant on any understanding of how the drones work, but it is disturbing that it seems to have been his students who ‘denounced’ him or, more innocently, simply posted the video on social media where the FSB saw it.  The students did, reportedly claim that Bielozierov had told them he was looking forward to the arrival of the Ukrainian Armed Forces, and that in social media he had been negative about the Russians, had been pleased at their losses and had suggested that the Crimean Bridge (illegally built by the invaders) would be hit.

Bielozierov was dismissed from his job and also jailed in the middle of September for 13 days.  There are conflicting reports as to whether this was under Article 20.3 of the Russian code of administrative offences, for purported demonstration of something that the police decided was “similar to Nazi symbols” or under Article 20.3.3 with it claimed that he had ‘discredited the Russian army’. Kholod reported that a video had also been posted in which Bielozierov, doubtless under duress, stated that he “admitted his guilt”.

The Russian FSB came for him again on 28 October 2022, also over a song, however this time, they also used physical violence against him.  He later recounted that the FSB had turned up at his hostel at 6.15 a.m., forced him to the ground and had kicked him around the kidneys, the stomach and chest.  They had also trodden on his head, causing damage to his earlobes and one had hit him in the face.  They removed all of his documents, including his Ukrainian passport and work record booklet, as well as his laptop and telephone. Several weeks later, he told a Kholod correspondent that efforts to retrieve these had been fruitless.

On 28 October, ‘judge’ Aleksandr Vladimirovich Voronoi from the occupation ‘Central district court’ jailed him for 14 days, without probing the absurdity of the two charges against him. One was the same Article 20.3 of the administrative code.  Although this Article tends to be described as about ‘Nazi symbols’, the scope of what it prohibits is, under the current Russian regime, much broader, namely “‘propaganda or public demonstration of symbols or other elements of extremist organizations or other symbols, etc. that are banned”.

Bielozierov was charged and jailed, as had many other Ukrainians recently, over the Ukrainian patriotic song ‘Chervona Kalyna’ [‘Red Kalyna, or Vibernum’].  The excuse for the prosecution is the claim that slogans from the song were used by the Organization of Ukrainian Nationalists, which Russia has banned.  This is doubtless a pretext, with the real reason being the international prominence and poignance the song has gained since Russia’s full-scale invasion of Ukraine.  The version first sung alone by Andriy Klyvniuk from Boombox, then accompanied by others in a powerful Zoom performance [watch and listen to the end!] were widely watched in Ukraine, and then became known worldwide through a Pink Floyd version with all proceeds going to the Ukrainian Humanitarian Fund.

The other charge was under ‘Article 19.3 [resisting the legitimate demands of enforcement officers], with it claimed that he had ‘shown resistance’ to the officers who burst into his room and began beating and kicking him.

Although the criminal charges laid on 23 December 2023 suggest that he was already prosecuted once under the administrative charge of ‘discrediting the Russian armed forces’, it is not quite clear when this earlier charge was laid.  He is now, however, facing a much more serious charge, one that could result in a long sentence.

After a new attack on Bielozierov by the notorious pro-Kremlin blogger Aleksandr Talipov, Bielozierov himself reported on VKontakte that a denunciation had been submitted against him by somebody called ‘Dmitry Daimond’.  He commented that “You can lose your job; pay; your health; your liberty; even life itself, but the main thing is to not lose your conscience.”

In early January, Bielozierov spoke of the dire situation he was in under house arrest, reporting that he had twice fainted from hunger as he did not have the money for food, or ability to get to his family.   He explained that his wife is far from Simferopol, with their son, and could not come, while those he knew in the hostel had all gone away for the New Year break.   He has since told Mediazona that the situation has much improved. It is cheering to know that people responded, having heard of his plight, and almost certainly, why he was being persecuted, began arriving at the hostel with food, etc. for him.  The occupation ‘court’ did, however, impose a ban on effectively all forms of communication, and Bielozierov has been ignoring this, and continuing to use the Internet and update his social media page.  He is probably right, therefore, in fearing that the house arrest may shortly turn into actual detention.