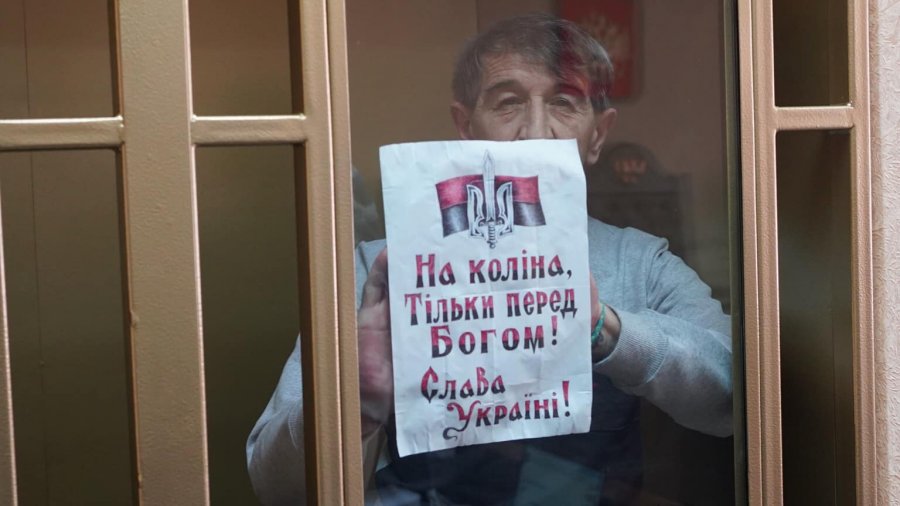 A Russian court has increased the sentence against Crimean political prisoner, Oleh Prykhodko, with the increase, albeit only by a month, significant for two reasons.  Prykhodko is already 65 years on and has health issues, so even the original five-year sentence is of concern. The additional punishment is especially cynical as it was imposed because of Prykhodko’s insults directed at two FSB officers directly involved in the brazen fabrication of criminal charges against him.

Graty.ru reports that information about the added sentence has only become available now, although the sentence was increased many months ago. The sentence actually orders 360 hours of compulsory labour, but then adds the month, as well as ten thousand roubles to the original 100 thousand rouble fine. The Voroshilov district court decided that, by insulting so-called ‘witnesses’, Prykhodko had demonstrated ‘contempt of court’.   Contempt, it should be said, of the earlier Russian ‘court’ which had ignored clear evidence that the charges were pure fiction and that the FSB ‘witnesses’ whose ‘testimony’ Prykhodko interrupted were openly lying.

Oleh Prykhodko is one of several Crimeans arrested soon after Russia was forced to release a large number of Ukrainian political prisoners, including Oleh Sentsov, in order to keep MH17 witness (or suspect) Volodymyr Tsemakh away from the Dutch prosecutors.

Prykhodko was initially arrested on 9 October 2019 and charged with planning to blow up the Saki City Administration building.  It was alleged that the ‘evidence’ for this had been found during a search of his home, namely the explosives that the FSB officers claimed to have found in one of his garages. There were at least three reasons for strong scepticism.  Prykhodko had never concealed his vehement opposition to Russia’s invasion and annexation of Crimea.  This had prompted earlier visitations by Russian enforcement officers and administrative, prosecutions and the then 63-year-old had every reason to expect further FSB searches.  He was also a blacksmith and metalworker by profession, who used both garages for welding and soldering work.  He would have been suicidal to hold flammable substances near his equipment.  The third reason was that the FSB refused to ‘search’ the second of Prykhodko’s garages.  The only possible explanation for this is that they had already ‘found’ what they had, in fact, brought with them, and knew that there was nothing to find.

No attempt was ever made to explain how Prykhodko was supposed to have obtained explosives which were not easily available, nor why there was no evidence of attempts to do so.

Prykhodko is a man of very fixed views which he expresses, without mincing his words, when angry.  There were two incidents in court over which the additional charge was initiated.  One was when FSB officer Vladimir Stetsik gave ‘testimony’ about how he had supposedly found the explosives. Prykhodko’s language was extremely strong, and he was removed from the courtroom until the end of Stetsik’s questioning.  Prykhodko later reacted with equally bad language when FSB officer Ivan Romanets said that he did ‘not remember’ the man who, in the first hours after his arrest, claimed to be a doctor and tricked Prykhodko into providing DNA without a lawyer present.  That DNA was later claimed to have been found on the explosives.

The additional charge of ‘contempt of court’ (under Article 297 § 2 of Russia’s criminal code) was brought against Prykhodko after the initial sentence in March 2021.  In the Spring of 2022, judge Konstantin Zaderko found him guilty of the charge, but added only one month to the sentence he was already serving.

If there were compelling grounds for believing the first of the initial charges against Prykhodko to be fabricated, there was serious proof of falsification with respect to the second charge which only became clear three months later. Prykhodko was accused of having planned to set fire to the Russian general consulate building in Lviv, Western Ukraine, with the alleged ‘proof’ of this lying in a telephone and a memory stick.  It was claimed that Prykhodko had, over the phone and through text messages, discussed plans to carry out a terrorist attack on the Russian consulate in Lviv.

There is considerable testimony from friends and colleagues confirming that Prykhodko had extremely basic knowledge of how to use either a smartphone or a computer and would probably not have known where a flash drive is even inserted.  More importantly, the defence succeeded in debunking the prosecution’s claims regarding the alleged conversation and text messages. They demonstrated, via billing records, that the telephone, allegedly found during the search, and the one supposedly used by the person in Lviv, had been bought in the same Simferopol shop shortly before the supposed communication.  The lawyers also showed that the phone call which was supposed to have been made by this mystery individual from Lviv, during which he had hinted at Prykhodko’s purported terrorist plans, had, in fact, come from the Kherson oblast, more precisely somewhere around the administrative border with occupied Crimea.  Such a call could easily have been made by the FSB, which would explain why the latter showed no wish to identify the mystery person, or to try to ascertain why the phone which was supposed to be Prykhodko’s was registered in another name altogether. The defence also carried out an experiment which showed that Ukrainian sim-cards work in occupied Crimea, but mean that any call or message is registered as coming from a Ukrainian user.  There was, in short, nothing to have prevented all of the alleged text message ‘correspondence’ to have been carried out in occupied Crimea.

All of the above was ignored by Russian prosecutor Sergei Aidinov who demanded a huge 11-year sentence, as well as by presiding ‘judge’ Alexei Abdulmazhitovich Magomadov; together with Kyrill Nikolayevich Krivtsov and Sergei Fedorovich Yarosh from the notorious Southern District Military Court in Rostov-on-Don (Russia).  On 3 March 2021, they found Prykhodko guilty of all charges, however removed the charge under Article 223.1 (preparing explosives) as being time-barred.  They sentenced him to five years’ harsh-regime imprisonment with the first year in a prison, the worst of all Russian penal institutions. He was also fined 100 thousand roubles.

The renowned (and now forcibly dissolved) Memorial Human Rights Centre declared Oleh Prykhodko a political prisoner.  They found the case against the Ukrainian activist falsified and lacking in any elements of a crime.  It was clear, they said, that he had been arrested and tried purely because of his political views, in particular his unwavering opposition to Russia’s occupation of his native Crimea.