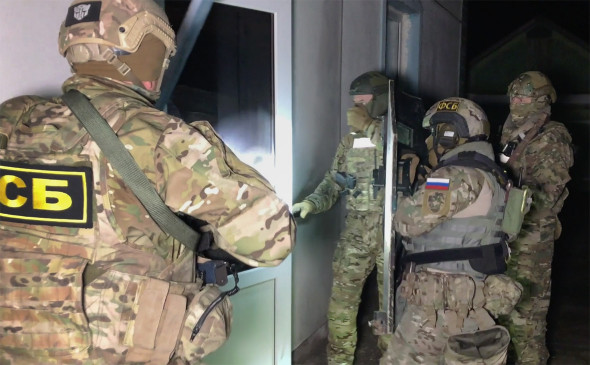 There has been no end to the claims made by Russia and its proxy Donbas ‘republics’ of attacks by Ukrainian forces, acts of sabotage, etc. over recent days.  Most are extraordinarily sloppy, as though the aim lies mainly in volume, not in plausibility.  One report on 23 February stood out, and not only because it came from Russia’s FSB [security service].  The claim that ‘a terrorist attack’ on a church in occupied Crimea had been thwarted was embellished with two ominous details.  The FSB asserted that six ‘Russian citizens’ had been arrested and that they were supporters of the Ukrainian nationalist organization ‘Right Sector’.

Russia’s FSB has been claiming to have prevented terrorist attacks since Russia invaded Crimea in 2014.  There had been no terrorist attacks prior to Russia’s annexation, nor any since, however Russia has used such claims to torture and imprison very many Ukrainians, including the renowned Ukrainian filmmaker Oleh Sentsov.  It is, unfortunately, likely that six Ukrainians have been taken prisoner.  The fact that they are described as ‘Russian citizens’ means nothing.  Russia has illegally made it next to impossible to live and work in occupied Crimea without taking such citizenship.

Russia so demonized Right Sector back in 2014 that its then leader Dmytro Yarosh was mentioned by the Russian media more often than most Russian politicians, barring only Russian President Vladimir Putin and one or two others. Its mention now could mean no more than that the FSB has targeted Crimeans with a known pro-Ukrainian position.

The FSB claim that these six supposed Right Sector supporters were detained while planning to detonate a home-made explosive device “in one of the Orthodox churches of the region in order to frighten the population”.  It is asserted that the components for such a device were found in the garage of one of the arrested men.  The text then goes on to claim that “in the radicals’ means of communication, instructions were discovered on their preparation; correspondence with discussion of the planned terrorist act; as well as confirming the involvement of those detained in propaganda of radical ideology on the Internet.  In addition, ‘Right Sector’ symbols were removed from their homes.

It is not only the number of previous cases that makes suspicion warranted about this claim.  The FSB have provided no details at all, with this certainly meaning that those detained are held incommunicado, with no access to real lawyers.  Since Sentsov and three other opponents of Russian occupation were seized in May 2014, this has been a standard feature of such cases.  In almost all occasions where independent lawyers have finally (sometimes only after the intervention of the European Court of Human Rights) been admitted, the men have retracted any videoed ‘confessions’ and have described in detail the electric shocks, mock executions, beatings and other torture used against them.  Worth noting that in very many cases, the eventual indictment may bear almost no resemblance to the so-called ‘confessions’.  Such discrepancies can only point to the use of torture and other means of coercion.

See: When Russia shouted that Ukraine had attacked Crimea: A tale of torture and fabrication

In all such cases there are very real victims, many of whom are imprisoned now (Crimean Tatar leader Nariman Dzhelyal; Asan Akhtemov and his cousin, Aziz Akhtemov; journalist Vladislav Yesypenko; 63-year-old Oleh Prykhodko; Andriy Zakhtei; Volodymyr Dudka; Oleksiy Bessarabov; Dmytro Shtyblikov and others).

It is certainly true that many of the claims in recent days have been evidently absurd.  Nobody took the supposed Ukrainian ‘terrorist units’ that were ‘eliminated’ as they tried to cross the border into Russia from Donbas seriously, nor the claimed shelling of a border checkpoint in which the Russian side produced what looked like a derelict shed.  There was similar scepticism about the claimed shelling by Ukrainian forces in occupied Donbas, and ‘terrorist attacks’ on empty cars.  Some of the sloppiest of the fakes aroused mirth back in 2014 also.  Had the sinister methods behind them been taken more seriously back then, the world might not be watching now as Russia brazenly fabricates ‘casus belli’, demonstrating total disregard for credibility.