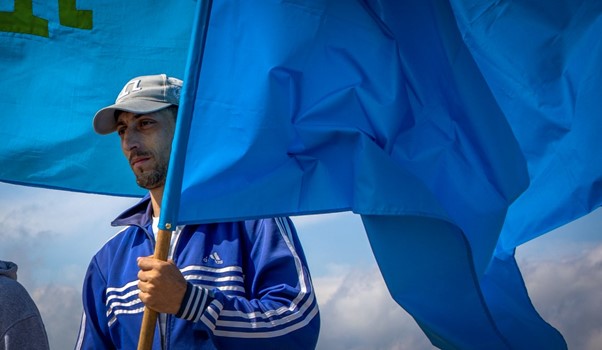 It was nine days after armed and masked men burst into the homes of Asan Akhtemov and his cousin, Aziz Akhtemov, that the men were finally able to see independent lawyers.  Both men have retracted their videoed ‘confessions’ and have given details of the torture and threats, including to Asan’s wife, that their Russian FSB captors used to obtain them.

The surreal ‘sabotage’ charges which Russia is using to imprison Nariman Dzhelyal, the internationally respected First Deputy Chairman of the Mejlis, or representative assembly, of the Crimean Tatar people, hinge upon the ‘confessions’ of the two Akhtemovs given while the men were held incommunicado.  It is, in fact, likely that the FSB would have continued blocking the men’s right to lawyers of their choosing, had the European Court of Human Rights [ECHR] not intervened.  ECHR wrote on 9 September that it was seeking answers from Russia regarding both access to a lawyer of the men’s choice and alleged torture.  On 12 September Aider Azamatov was finally able to see Asan Akhtemov, with Islyam Veliliaev seeing Aziz Akhtemov for the first time on 14 September.

It should be stressed that all the five men seized from 3-4 September had lawyers who had been actively trying to find out where they were being held, and see them from the outset.  The lawyers had also contacted the Chamber of Attorneys and informed them that the men had lawyers by agreement and did not need those appointed by the FSB.  Azamatov had constantly tried to contact Oleg Glushko [Ukrainian Hlushko] whom the FSB had tried to foist on Asan Akhtemov, with Glushko deliberately ignoring the fact that he was acting against Akhtemov’s wishes.  Azamatov has promised to lodge a formal complaint against Glushko who clearly watched Akhtemov being tortured and did nothing, and was, in fact, reported to have said that such behaviour was “standard procedure” 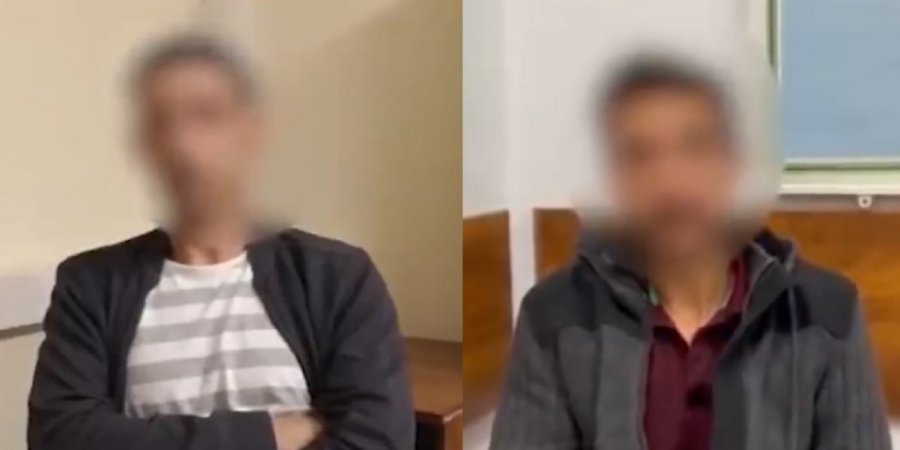 Asan (left) and Aziz Akhtemov, faces blurred, giving ’testimony’ they have now retracted, saying it was obtained through electric shock and other forms of torture

That torture had been used to extract a ‘confession’ was already known, from the very brief meeting Asan Akhtemov was allowed with his wife, but he has now been able to provide more details, reported both by Azamatov and, in written form, which Graty published. Asan’s ordeal began close to midnight on 3 September when around 10 armed and masked men in military gear burst into his home. They produced no documents to justify this invasion.  With his wife and children screaming in terror, they put handcuffs on him, as well as a plastic mask around his eyes, so that he couldn’t see anything.

He was taken away, by armed men who had not identified themselves, and without being able to see anything, and driven for around 40 minutes, probably in the direction of Simferopol.

Having arrived at some building, he was taken into a basement where they bounded him to a chair and then attached wires to his earlobes.  They passed an electric current through them, causing excruciating pain, as though his head was on fire.  They repeated this torture around 6 to 7 times, with the current passed through each time for around 10 seconds.

His captors also threatened him, saying that they would plant weapons and drugs, and also mentioning that he wife was beautiful and that she too could be targeted.

While the electric current was being used, they claimed that he had blown up a gas pipe at Perevalne and that his cousin had already told them everything, that they knew how they had done it, in which car, etc. They threatened that he would not leave the building alive.

His torment did not end even after the electric shocks were so terrible that he told them he would agree to whatever they told him to say.  They dragged him upstairs, put him on a bench, continuing to threaten him, and then he received a strong blow around the neck, before being dragged off somewhere else.  There his mask was removed, and a man in military uniform, who called himself a doctor, told him that he must say what they tell him.  They hit him once more, dragged him back to the basement where he thought they were about to use the electric shocks again and immediately said he would do what they said.  It was at this point that the video camera appeared and he was told that he had one last chance, that he must say what they demanded .  Among those present was one woman, also in military uniform, who told him he had two hours.

His ‘confession’ does not seem to have been enough for them as they started making clear hints about shooting well, etc. and making him think they were about to kill him.  He was put in a car and taken somewhere, with his captors telling him that he would run, and they would shoot him dead and say that they had done so because he tried to run away.  He told them that they could shoot him now, as he would not run for them.  After this, he was taken to the FSB building in Simferopol where he was ‘interrogated’ and where he signed a lot of documents.  He was in a huge amount of pain, and had problems breathing.

Aziz Akhtemov has also retracted all the ‘confessions’ given before he saw Veliliaev (and, at least part of the part in the presence of another FSB-loyal ‘lawyer, Aleksandr Polyansky). He too was subjected to electric shock torture and has asked to be questioned again, since all ‘testimony’ was given with the use of illegal methods of physical and psychological torture.

Veliliaev also mentions that there was a face-to-face meeting with a driver (Nabiyev) who has ‘witness’ status in this case, and who was also held for 48 hours in the FSB building.  Although it sounds as though this witness merely confirmed having driven Aziz to Kherson to receive passport documents, there have been many occasions where people have been tortured and also threatened with criminal charges if they don’t provide the ‘witness testimony’ demanded.

The families of both of the Akhtemovs are adamant that the men were at home at the time that the FSB is claiming that they were trying to blow up a gas pipe.

There are, in fact, compelling grounds for doubting that there ever was an act of sabotage,  and not only because Russia has already used such ‘sabotage cases’ against a number of Ukrainians in occupied Crimea, with all of them based on ‘confessions’ provided by men who did not have access to lawyers.

In this case, there was an original report on 23 August, which claimed that “unidentified individuals have damaged a gas pipe” in Perevalne (Simferopol region).  The Russian state-controlled RIA Novosti cited an occupation police report stating that “information has been received about damage to a gas pipe. An inspection of the site established that the metal damage to the gas pipe had, possibly, arisen as the result of illegal actions by unidentified individuals”.   The criminal investigation launched was under Article 167 § 2 of Russia’s criminal code (‘deliberate destruction or damage to property’).  A slightly later report said that the gas served a military unit (but not a military settlement which Russia has established nearby).  There was no further mention of this until five Crimean Tatars: Nariman Dzhelyal; Asan and Aziz Akhtemov; Eldar Odamanov and Shevket Useinov were seized on 3-4 September and then disappeared for up to two days. 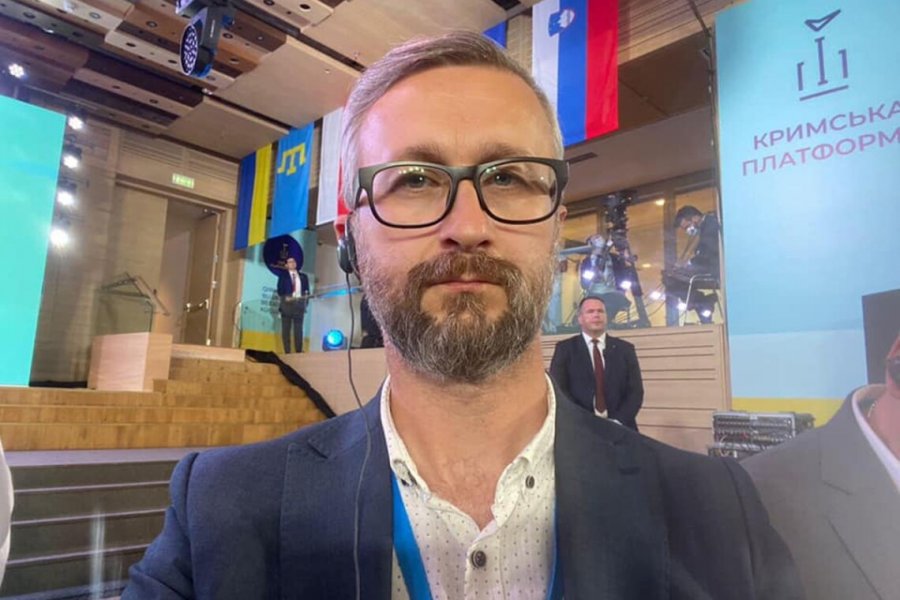 The gas pipe incident coincided with the inaugural meeting in Kyiv of Ukraine’s international Crimea Platform.  This was attended by high-ranking representatives of the EU and its member states, the USA, Canada (45 countries in total) and by Nariman Dzhelyal. Russia had reacted with hysteria and open threats of prosecution, making the claim that Dzhelyal should have been simultaneously informing the international community about human rights violations in occupied Crimea and involved in an ‘act of sabotage’ entirely implausible.

Even before the details about torture and the Akhtemovs’ retraction of their ‘testimony’, it was clear that the only reason for raids in the night; secrecy around the men’s whereabouts and the refusal to allow access to proper lawyers, that the FSB did not have any kind of real evidence.  It is likely that the ‘secret witness’ in this case is somebody who was also tortured and probably threatened with imprisonment if he did not agree to cooperate.

The Akhtemovs and Dzhelyal are now imprisoned in the Simferopol SIZO [remand prison] and are all accused of ‘committing an act of sabotage’, under Article 281 § 1 of Russia’s criminal code, with this carrying a sentence of from 10 to 15 years.  According to one of Dzhelyal’s lawyers, Nikolai Polozov, Dzhelyal is imprisoned in ‘the special bloc’ (in a two-person cell with a Jehovah’s Witness, another of the targets of Russian persecution).  Three weeks after taking part in the Crimea Platform despite threats of dire consequences from the Russian occupation regime, the Russian occupiers have now placed him on their special ‘register’ in the SIZO as a person supposedly “inclined to commit terrorist and extremist crimes”.