Mariupol children forced to entertain and ‘thank’ the Russian soldiers who shattered their childhoodUkrainian researcher savagely tortured for ‘confession to treason’ against Russian proxy ‘Donetsk republic’Wagner PMC convicted killers ‘get clean slate, freedom and pardon" for fighting Russia’s war against UkraineRussia abducted, usually tortured, over a thousand civilians, including children in Kherson oblast alone Children to undergo compulsory military training in both Russia and occupied Crimea Russian FSB uses total isolation to torture and try to break abducted Kherson woman In Memory: Viktor Fainberg, courageous Soviet dissident, defender of Russia’s Ukrainian political prisoners Imprisoned Crimean artist faces ‘terrorism’ charges for protesting Russia"s war against Ukraine21-23-year sentences for three Belarusian heroes who helped Ukraine stop Russia from taking Kyiv She said goodbye to life when the airstrikes made the houses collapse like a house of cardsRussia moves to legislate ‘impunity’ for all war crimes committed in occupied Ukraine Russia plans to imprison soldier who admitted to murder and plunder in Ukraine - for ‘circulating fake news’‘My husband and son were injured during an airstrike’Russia demolishes Mariupol Drama Theatre to try to blame Ukraine for its most heinous war crime ‘For all the evil they have done, they will be held accountable before God!’‘I fell face down into the glass and covered my head with my hands’The KHPG receives half of Memorial’s Nobel, and will give the money to the victims of Russia’s invasion of UkraineBelarusian rail partisan sentenced to 16 years for obstructing Russia’s invasion of Ukraine Brutal torment of young Mariupol woman imprisoned at Olenivka ‘concentration camp’ and in Russia In Memory: Hennadiy Afanasiev
• Topics / Terrorism 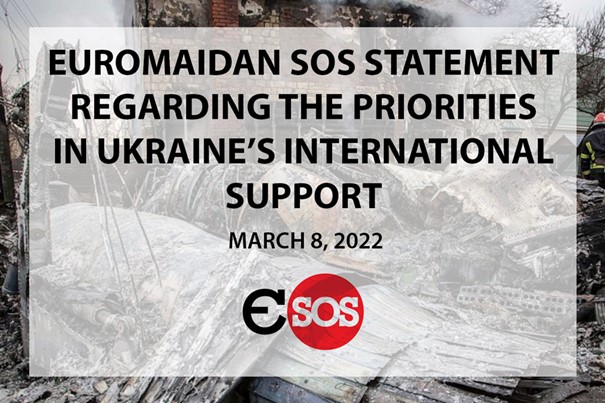 Today is the 13th day of Russia’s aggressive war and invasion of Ukraine. According to the United Nations, almost 2 million asylum seekers have already crossed the borders of Europe. An increasing number of international organizations and volunteer initiatives are involved in humanitarian work. Governments are declaring various forms of support for Ukrainian refugees and various forms of assistance.

Ukrainians are infinitely grateful to all those participating in the organization of humanitarian aid to war victims. This activity reduces the number of civilian casualties and gives people a chance to survive. However, this by far is not enough!

Russia’s war against Ukraine is and will remain a threat to Europe and the entire world. In his rhetoric, Putin has already directly threatened Lithuania, Latvia and Estonia. Notably, the threat from Belarus, which is under total control of the Kremlin, is very real, we are facing a direct attack by the Belarusian army. The involvement of Russia’s CSTO partners is not ruled out. Today, the Vice President of the European Commission, Valdis Dombrovskis, urgently noted that this threat could spiral into a massive military intervention. Russian troops must be stopped now! Otherwise, Europe will have asylum anywhere. The number of victims will certainly increase a hundredfold, even a thousandfold.

It is crucial for international organizations, foreign governments, non-governmental organizations, and citizens all over the world to realize that humanitarian aid to war victims IS NOT ENOUGH!. They must concentrate their efforts and stop the Kremlin to prevent the number of victims from rising! They must help Ukraine defend itself against Russian aggression.

That is why we are calling upon the governments of the world, international organizations, civilians everywhere – including the global Ukrainian to continue supporting Ukrainians by providing desperately needed weapons, means of protection, medicines whilst exerting political and economic pressure on the aggressor countries.

Ukraine is fighting and courageously responding to the onslaught of enemy armies, tens of thousands of volunteers across the country are joining the Armed Forces or Territorial Defense, too many of them literally barehanded. They need your support to win and protect you, the citizens of the world.

The Euromaidan SOS initiative urgently calls upon you to:

close the skies over Ukraine and prevent the bombing of peaceful Ukrainian cities;

disconnect all Russian and Belarusian banks from SWIFT, first of all Sberbank;

blacklist Russia and Belarus on the FATF;