Russia brings grotesque propaganda to Berdiansk after Ukrainian journalists refuse to collaborate Russian invaders murder Ukrainian volunteers Impassioned appeal from Ukrainian Muslim leader in face of Russia’s war to destroy Ukraine Russia is forcing Ukrainians from occupied Crimea and Donbas to fight in its invasion of Ukraine Children among the dead after Russian invaders opened fire on fleeing civilians Russia installs its propaganda TV after seizing Kherson and imposes 15-year sentences for reporting its invasion of UkraineUkrainian survivors of the Holocaust demand Putin and Russia get out of Ukraine Russia continues its carnage, flouting binding order from ECHR to stop bombing civilians in UkraineBabyn Yar bombed by Russia, 80 years after Nazi Massacre of Ukrainian Jews Russia proposes 15-year sentences and threatens "treason charges" for telling the truth about its war crimes in UkraineRussian schoolchildren told that Russia is bombing and killing Ukrainian children in ‘self-defence’ Putin miscalculated. Russia is fighting “an army of 40 million Ukrainians” Chief Rabbi of Ukraine demolishes Putin’s excuse for Russia’s invasion Russia bombs a Ukrainian kindergarten and apartments in its war against independent Ukraine Putin will continue attacking until Russia is stopped. Help Ukraine defend its freedom today!Russian Rule of Lawlessness in Occupied Crimea and DonbasRussian priest arrested and prosecuted for sermon opposing Russia’s war against Ukraine Mayor of Melitopol Ivan Fedorov abducted after refusing to collaborate with the Russian invaders Russia uses terror and abduction in attempt to force schools to collaborate in occupied Melitopol Ukrainian journalist Oleh Baturin feared abducted by Russian invaders in Kherson oblast
• Topics / War crimes

Russia effectively admits it deliberately bombed the maternity hospital in Mariupol that killed three patients, including a child 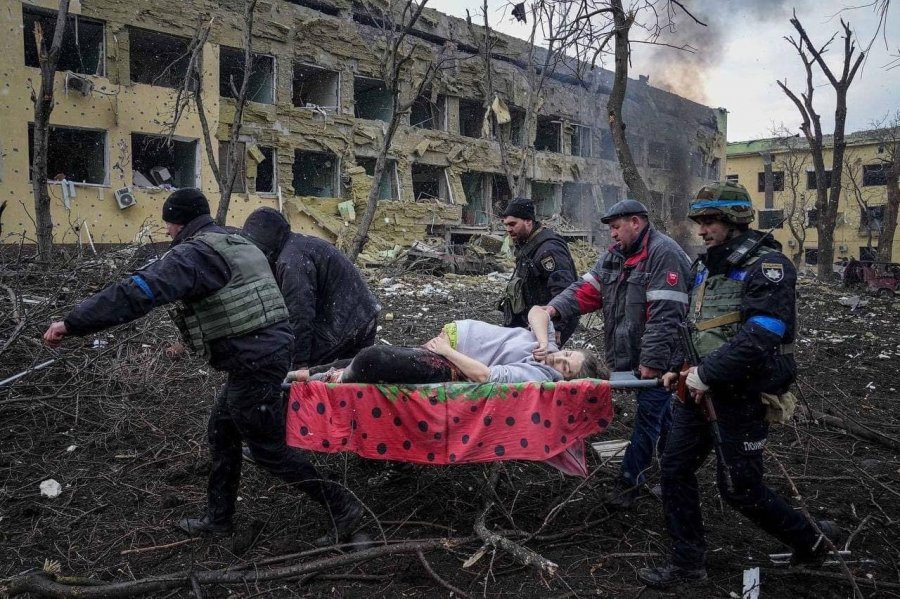 Russian bombing of a maternity and children’s hospital in Mariupol on 9 March 2022 Photo Evgeniy Maloletka, AP

Update  On 11 March, it was learned that three patients were killed in Russia’s bombing on 9 March of a children’s hospital and maternity hospital in Mariupol, and that Russia had bombed it deliberately  Russia’s Foreign Minister Sergei Lavrov publicly claimed that the maternity hospital had been used as a base for the Azov Battalion, and that Russia had provided ‘information’ to this effect to the UN days earlier.  Russia has thus provided confirmation that the hospitals (including the children’s hospital that Lavrov did not mention) were bombed deliberately. There is a huge amount of video footage and photos clearly demonstrating that Russia’s targets were hospitals.

Russia bombed a children’s hospital and maternity hospital in Mariupol on 9 March, causing horrific devastation and wounding at least 17 patients, including pregnant women.  By the following morning, three people had died of their injuries, including a child. This new war crime comes after days in which Russian airstrikes have been pummelling the port city, causing a major humanitarian disaster.

The Mariupol City Council accused Russia of deliberately targeting the children’s hospital and reported that several bombs had been dropped.  Whether or not Russia cold-bloodedly aimed a maternity and children’s hospital, there is simply no doubt that it has been deliberately bombing and killing civilians for days, while constantly blocking the evacuation of civilians by failing to honour agreements on a humanitarian corridor.  The buildings hit were very large, and it is hard to imagine that the Russian military did not, at the very least, know that they could be hit.  In its statement, Euromaidan SOS points out that medical facilities are among the most protected civilian sites under international humanitarian law and there could be no excuse for such an attack.

Russian state media are silent about the bombing, but have intensified their circulation of extraordinary fakes, such as the claim by a Russian defence ministry official about ‘nationalists’ supposedly planning ‘provocation with the use of chemical substances’.

After several days where the shelling and airstrikes were so intense that there was no possibility of assessing the number of casualties, the Mariupol city authorities have now reported up to 1300 deaths as a result of Russia’s aggression, with this figure likely to include many children.  The victims of Russia’s savage attack include a mother who was killed by Russian shelling, and her 6-year-old daughter Tanya who was left with the body of her mother under ruins and died of dehydration before she could be rescued. The number of deaths is so high, that the authorities have been forced to bury the bodies in a mass grave.

This is what Russia is claiming is a ‘military operation’ aimed at the “demilitarization and denazification of Ukraine’.   To achieve this alleged aim, it has targeted cities last bombed by the Nazis; has forced the use of mass graves because of the huge number of Ukrainian adults and children whom it has killed, including through the use of prohibited weapons like cluster munitions and thermobaric rockets.

Its very use of the term ‘denazification’ and attempt to claim that the democratically elected leaders of Ukraine are anti-Semites or ‘neo-Nazis’ have elicited outrage from, among others, the Chief Rabbi of Ukraine, Ukrainian survivors of the Nazi occupation of Kyiv and Holocaust organizations.

See: Ukrainian survivors of the Holocaust demand Putin and Russia get out of Ukraine