Mayor of Melitopol Ivan Fedorov abducted after refusing to collaborate with the Russian invaders Russian priest arrested and prosecuted for sermon opposing Russia’s war against Ukraine Russia effectively admits it deliberately bombed the maternity hospital in Mariupol that killed three patients, including a childRussia brings grotesque propaganda to Berdiansk after Ukrainian journalists refuse to collaborate Russian invaders murder Ukrainian volunteers Impassioned appeal from Ukrainian Muslim leader in face of Russia’s war to destroy Ukraine Russia is forcing Ukrainians from occupied Crimea and Donbas to fight in its invasion of Ukraine Children among the dead after Russian invaders opened fire on fleeing civilians Russia installs its propaganda TV after seizing Kherson and imposes 15-year sentences for reporting its invasion of UkraineUkrainian survivors of the Holocaust demand Putin and Russia get out of Ukraine Russia continues its carnage, flouting binding order from ECHR to stop bombing civilians in UkraineBabyn Yar bombed by Russia, 80 years after Nazi Massacre of Ukrainian Jews Russia proposes 15-year sentences and threatens "treason charges" for telling the truth about its war crimes in UkraineRussian schoolchildren told that Russia is bombing and killing Ukrainian children in ‘self-defence’ Putin miscalculated. Russia is fighting “an army of 40 million Ukrainians” Chief Rabbi of Ukraine demolishes Putin’s excuse for Russia’s invasion Russia bombs a Ukrainian kindergarten and apartments in its war against independent Ukraine Putin will continue attacking until Russia is stopped. Help Ukraine defend its freedom today!Russian Rule of Lawlessness in Occupied Crimea and DonbasTerror and abductions as Russia tries to break Ukrainian resistance in Kherson and other occupied cities
• Topics / War crimes 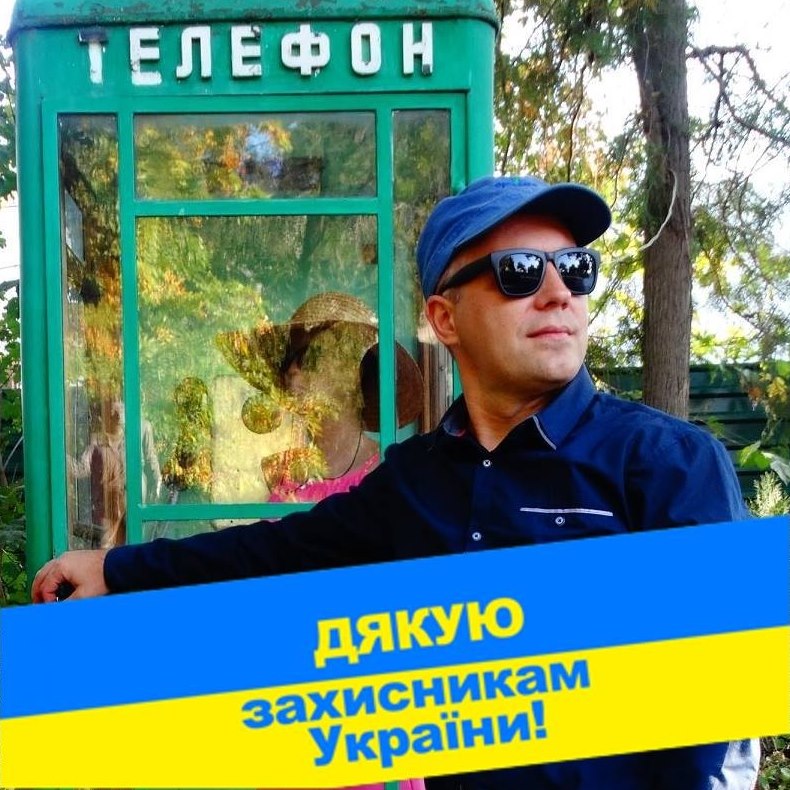 Oleh Baturin from his Facebook page. The words on the blue and yellow of Ukraine’s flag say thank you to the defenders of Ukraine

Oleh Baturin, a journalist from Kakhovka in the Kherson oblast has disappeared and there are legitimate fears that he has been abducted by Russian soldiers.  Baturin is a journalist for the newspaper Novy Den’ [New Day], whose evidently pro-Ukrainian views might well make him a target.   Earlier on 12 March he reposted ominous information from a deputy of the Kherson Regional Council, Serhiy Khlan, about  plans by the Russians to stage a pseudo-referendum, similar to those used in occupied Crimea and Donbas in 2014 and to set up a so-called ‘Kherson people’s republic’.

Baturin’s wife says that, at around 16.00 on 12 March,  her husband received a call from an acquaintance who asked him to come and meet him at the petrol station near Journalist House in Kakhovka.  He set off at around 16.30, without taking either his telephone or documents and saying that he would be back in 20 minutes.

The Institute for Mass Information, which first reported Baturin’s disappearance, notes that local chats speak of Russian soldiers being around the petrol station at about 16.50.   Kakhovka itself is not occupied, however the neighbouring city of Nova Khakhovka has fallen under the control of the Russian invaders.

Another journalist, Iryna Staroselets, Kherson correspondent for Ukrinform, has reported receiving threats from “Russians”, who give her name “and explain what they’ll do to me”.

Nothing has been seen or heard since 11 March about the whereabouts of Melitopol  Mayor Ivan Fedorov who was taken about with a plastic bag over his head by armed Russians after he refused to collaborate with the invaders.  The latter also carried out an armed search of the home of Leila Ibragimova, a Crimean Tatar and Deputy Head of the Zaporizhya Regional Council, and abducted her for several hours.  It remains unclear whether Olha Haisumova has been released after she was reportedly seized by Russians at the large protest by Melitopol  residents against the Russian occupation and demanding the release of Ivan Fedorov (details, such as they are, here).

All of this is ominously reminiscent of the lawlessness unleashed first on occupied Crimea, then parts of Donbas in 2014.

So too, though in rather more grotesque fashion, are the apparent attempts to conjure up a supposed ‘Kherson people’s republic’.  Russia’s military might and Russian leader Vladimir Putin’s lack of any respect for human life make Russia a formidable enemy, however the inability of these ‘Russian world’ fanatics to come up with anything but a rehash of 2014 fake ‘referendums’ is truly staggering.  Russia has not only invaded Ukraine, but is bombing civilians and causing untold suffering and destruction.  Who would they be trying to convince with such a farcical ‘referendum’ and puppet ‘republic’?   Especially given that the entire world is watching Ukrainians, even in those cities now under the Russian invaders’ control, including Kherson, risking their lives to demonstrate their opposition to the Russians.

The Centre for Journalist Investigations reported on 12 March that the Russian invaders were ringing around deputies of the Kherson Regional Council, trying to get them to collaborate in creating a so-called ‘Kherson people’s republic’. They are also proposing such collaboration to heads of territorial communities, proposing that they agree to this and raise the Russian flag, or resign.

The Russian invaders are, for the moment, having no success.  Suspilne Kherson reported in the evening of 12 March that an extraordinary session had just been held of the Kherson Regional Council.  44 deputies adopted a statement, clearly articulating that “the Kherson oblast is Ukraine” and that there will be no pseudo-referendum in the oblast.