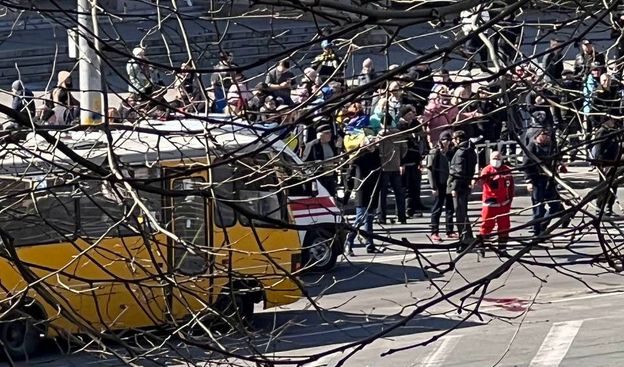 On 21 March, Russian soldiers violently turned on residents of Kherson who had come out into the streets in protest, as they have each day since Russia’s invasion and occupation of the city.

The Kherson-based newspaper Vhoru reports that some of the protesters went up to the Monument to those who died during Euromaidan on Freedom Square and began removing Russian propaganda lies about the Ukrainian army.  It was at that point that the Russian soldiers began hurling shock and teargas grenades, as well as shooting.  The distressing images, and Russian brutality, can be seen here.  One person was shot in the leg and an ambulance was called, while others are also reported to have been injured, as well as several detained.  Importantly, however, at least some of the protesters returned and continued demanding that the invaders go home.

On Monday evening, Ukrainian President Volodymyr Zelensky made a special video address to the people of Kherson.

“Today in Kherson we all saw how free people were shot at by slaves.  The slaves to propaganda which has distorted their conscience.  Slaves who have become accustomed to pushing anybody into police vans, even elderly women holding a white placard, and even a young girl with a sheet of A4 paper with a single word ‘peace’. These slaves, sent by Russia, have never seen so many free people on the squares, on the streets; people who have no fear of them, the slaves holding guns…..”

“We were all with you, 40 million Ukrainians from your country, millions of Ukrainians in the world.  We all saw how you stood, felt how you want to restore freedom…”

He assured them that, as soon as Ukraine can get through to them, that each of the invaders will answer for seizing Ukrainians, for abducting the organizers of protests, etc.   He asked them not to think even for a second that Ukraine is not thinking of them.  “When you are in pain, know that our hearts are breaking at the same time, because we cannot be with you.”

Russia’s attempts to stage stunts where Russian soldiers hand out ‘humanitarian aid’, and still more, its plans to try to create a so-called ‘Kherson people’s republic’ have failed abysmally.  In occupied Kherson, Berdiansk and the few places under Russian military control, protests have been continuing despite the clear danger.

Russia is resorting to the methods of terror applied in both Crimea and Donbas back in 2014, with journalists; activists and leaders of local self-government being abducted.

Hennady Lahuta, Head of the Kherson Regional Administration, reports that the Mayor of Beryslav Oleksandr Shapovalov, as well as a local activist, were abducted early on 19 March and remain in captivity.  Shapovalov was finally able to contact his family, however there are serious concerns for his health since he suffers from heart problems and was very badly affected by covid.

Oleh Baturin, the journalist from Kakhovka in the Kherson oblast who was abducted by Russian soldiers on 12 March, was finally released eight days later, after being held prisoner, almost without food and water, and with his head covered or forced down.  He explained to his sister that, unlike him, the Russians were afraid to show their faces.

On 21 March, Mykhailo Kumka, the publisher behind the Melitopol  media holding MB Holding, and his family were finally released after being abducted together with the editorial staff of Melitopol  News.  Such methods are aimed at forcing local journalists to collaborate with the invaders, though thus far they have all been unsuccessful.