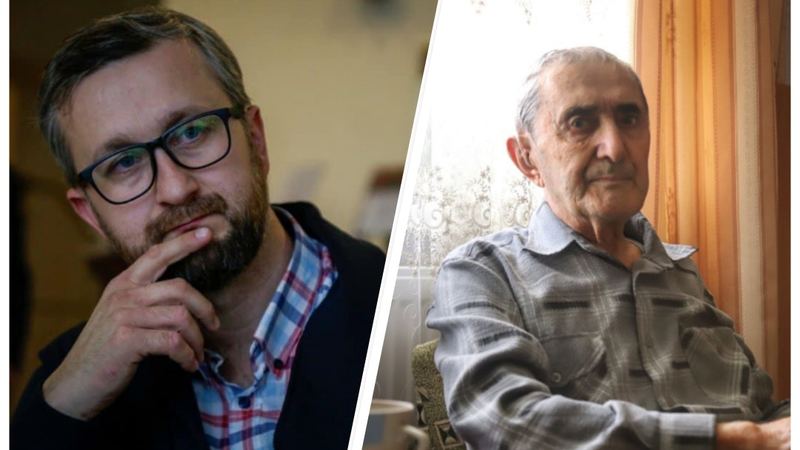 It is every Crimean Tatar son’s duty, when the time comes, to bid a fitting farewell to his parents, yet a Russian-controlled court in Crimea has refused to allow Nariman Dzhelyal to attend the funeral of his father, Enver Dzhelyal.  There was no good justification for the refusal by ‘judge’ Viktor Zinkov, but this was probably not surprising since there is absolutely nothing to warrant Russia’s imprisonment of Nariman Dzhelyal.

Enver Dzzhelyal died on 27 March, aged 84.  The last seven months of his life had passed under the cloud of Russia’s revenge attack against his son, a well-known journalist, public figure and the First Deputy Head of the Mejjlis, or self-governing body, of the Crimean Tatar people. Despite grotesque and evidently fabricated charges against Nariman Dzhelyal and two cousins – Asan Akhtemov and Aziz Akhtemov, all three men could face sentences of up to 20 years’ imprisonment.  Their ‘trial’ is presently underway at the occupation ‘Crimean High Court’.

Although the lives of three men and their families have been shattered, it was clear from the outset that Russia’s target was Nariman Dzhelyal.  He was the only high-ranking Mejlis leader who had not been forced out of occupied Crimea and he played a hugely important role in ensuring international awareness of the situation in the peninsula.

Russia is claiming that there was an act of sabotage in Perevalne in occupied Crimea on 23 August 2021, and that it was carried out by the Akhtemovs under direct orders from Dzhelyal.  There are legitimate grounds for doubting that the damage to a gas pipe that day was sabotage, and there are none for suspecting any of the men of involvement.  The timing of the alleged ‘sabotage’ is hard to view as a coincidence.  On that day, Dzhelyal was in Kyiv, attending the inauguration of the international Crimea Platform in Kyiv on 23 August 2021 together with EU President Charles Michel and high-ranking representatives of 45 countries, including the USA, Canada and individual EU states.

Moscow had reacted with hysteria to the Crimea Platform and its clear aim to facilitate the deoccupation of Crimea, and Dzhelyal himself had been directly threatened with the consequences if he took part.

The consequences were swift, beginning on 3-4 September, 2021. Dzhelyal was the last of five Crimean Tatars to disappear after being taken away by the FSB.  Eldar Odamanov was taken away after an armed search early on 3 September, while Shevket Useinov was taken prisoner, as were Asan and Aziz Akhtemov during armed raids in the middle of the night from 3-4 September.  Odamanov and Useinov were held incommunicado until 5 September, before being jailed for 10 and 15 days on absurd charges, quite unrelated to the armed raids on their homes.

In all five cases,  lawyers were prevented from being present and both of the Akhtemovs were only allowed to see independent lawyers around 10 days later, after the intervention of the European Court of Human Rights.  They immediately retracted the ‘testimony’ shown in FSB videos and gave harrowing accounts of the electric shocks, beatings and other torture methods used to extract their ‘confessions’.

Nariman Dzhelyal; Asan and Aziz Akhtemov have been imprisoned since 4 September, 2021.  The charges against all of them have become increasingly more severe, carrying sentences of up to 20 years.  At least the first escalation in the charges against Asan Akhtemov came immediately after he gave a detailed account of the torture used.

The only ‘evidence’ in this case comes from FSB officers who claim that the Akhtemovs freely ‘confessed’ to the charges, and from three secret witnesses.  These anonymous individuals, whose testimony cannot be verified, may have never even met the defendants.  We know from the testimony of those who have found the courage to publicly speak of their ordeals, that the FSB use torture and / or threaten to imprison them if they do not provide the fake testimony demanded.