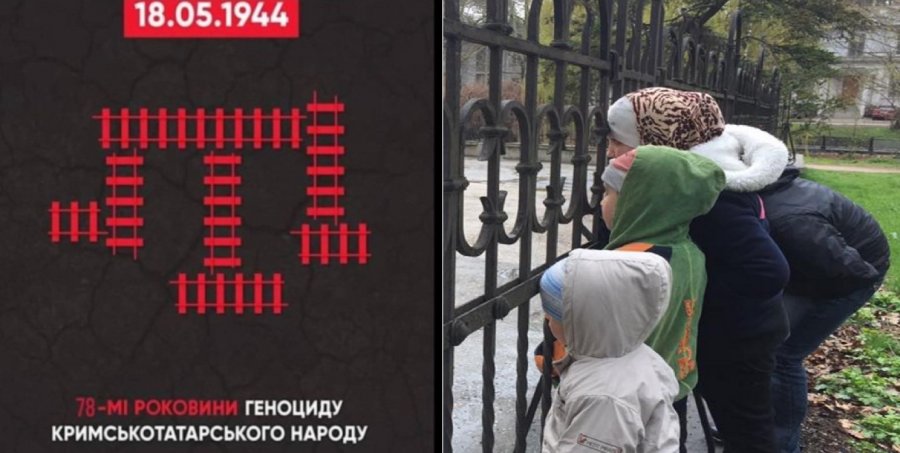 18 May 2022 marks the 78th anniversary of the 1944 Deportation of the entire Crimean Tatar people from Crimea.  It is eight years since Russia, having invaded and annexed Crimea, prohibited Crimean Tatars from gathering in remembrance of the victims of this heinous crime which is recognized in Ukraine as genocide.

Back in May 2014, Russia claimed that this was merely a ban on all gatherings, supposedly due to the war in Donbas and possible ‘trouble from extremists’.  The ban was, however, lifted just in time for a Russian language festival on 6 June.  It has remained in force specifically against remembrance of the Deportation and, effectively, against Crimean Tatars.

This year, as in all previous years, under Russian occupation, Crimean Tatars known for their civic position have received ‘warnings’ from the Russian occupation police or prosecutor’s office.  These warn them of “the inadmissibility of extremist activities”.  Since they are invariably delivered in the days leading up to 18 May, it would seem clear that the Russian occupiers view honouring victims of a crime against the entire Crimean Tatar people to be ‘extremism’.

The warnings remain identical from year to year, however there are differences this year, and not only because of Russia’s total war against Ukraine, and the extension of its methods of terror to areas of the Kherson and Zaporizhzhia oblast under Russian occupation.

One of the regular recipients of such ‘warnings’ is now himself a political prisoner.  The arrest of Nariman Dzhelyal, Crimean Tatar Mejlis leader, journalist and human rights defender, on 4 September 2021, both marked and was accompanied by an ominous new escalation in Russia’s persecution of Crimean Tatars.

It was entirely clear that Russia had arrested Dzhelyal in revenge for his participation in the inaugural meeting in Kyiv on 23 August of the international Crimea Platform.  He and two other Crimean Tatars – civic journalist Asan Akhtemov and his cousin, Aziz Akhtemov, were charged with a supposed ‘act of sabotage’ claimed to have taken place on the day that Dzhelyal spoke with high-ranking representatives of 45 democratic states about the situation in Crimea.

Their ‘trial’ is now underway, with the men facing 20-year sentences on absolutely preposterous charges, with the only ‘evidence’ from anonymous witnesses who may well not know any of the men.

The seizure of the above three men, as well as two others, bore all the hallmarks of abductions, not arrests, yet those members of their families and other Crimean Tatars who gathered outside the FSB offices to find out their whereabouts were roughly detained themselves.  Since then there have been several mass detentions, including of elderly people and women carrying cakes and balloons who came to greet human rights lawyer Edem Semedlyaev, who had been imprisoned for 12 days, essentially for properly representing those detained earlier.

Those arrests also heralded an escalation in open abductions, clearly aimed at torturing and / or threatening other Crimean Tatars into providing false testimony.  While two men have found the courage to publicly report the torture they were subjected to, it is likely that others agreed to initially sign a piece of paper, and then found the FSB come back with further demands, including acting as the ‘anonymous witnesses’ used to imprison political prisoners for up to 20 years.

Since the beginning of Russia’s total war against Ukraine, a large number of Crimean Tatar civic activists and journalists have received horrific sentences (from 12 to 19 years) without any crime.  The charges all faced are one of Russia’s most cynical conveyor belts of repression, with a large number of other political prisoners likely to receive similar sentences in the coming months.

Another such conveyor belt has accelerated since Russia seized parts of the Kherson and Zaporizhzhia oblasts. Over recent months, at least four Crimean Tatars (Arsen Ibraimov; Rustem Gugurik; Rustem Osmanov and Nazrulla Seidaliev) have been arrested and charged with involvement, while in mainland Ukraine, in the Noman Çelebicihan Battalion.  This body is perfectly legal in Ukraine and is not, despite the name, an armed formation.  Three of the men are permanently resident in the Kherson oblast, with Rustem Osmanov having actually been seized by the invading forces at his Kherson oblast home and then illegally taken to Crimea.

It is certainly not the case that only Crimean Tatars are persecuted in occupied Crimea, as the apparent abduction turned arrest of civic journalist and medical worker Iryna Danilovych has made all too clear.  Crimean Tatars, however, and the Mejlis, or self-governing body, of the Crimean Tatar people, played an enormous role in upholding Ukrainian unity and territorial integrity and the fact that the main indigenous people of Crimea so clearly identify themselves with Ukraine is doubtless an irritant to Moscow.  The vast majority of Ukrainian political prisoners held in occupied Crimea or Russia are Crimean Tatars, and it is ominously plain that the Russian invaders are also targeting Crimean Tatars in temporarily occupied parts of Kherson oblast.

Those western political leaders and analysts who believe Ukraine should accept Russian occupation of Crimea and Donbas because, allegedly, Putin needs to “save face”, would do well to remember that, in 2021, both areas under actual or effective Russian occupation received freedom ratings from Freedom House that were close to those of North Korea.  They should also note that Russia is leaving nothing to the imagination about the repression and rights violations that will swiftly follow any other Ukrainian territory if it falls under Russian occupation.