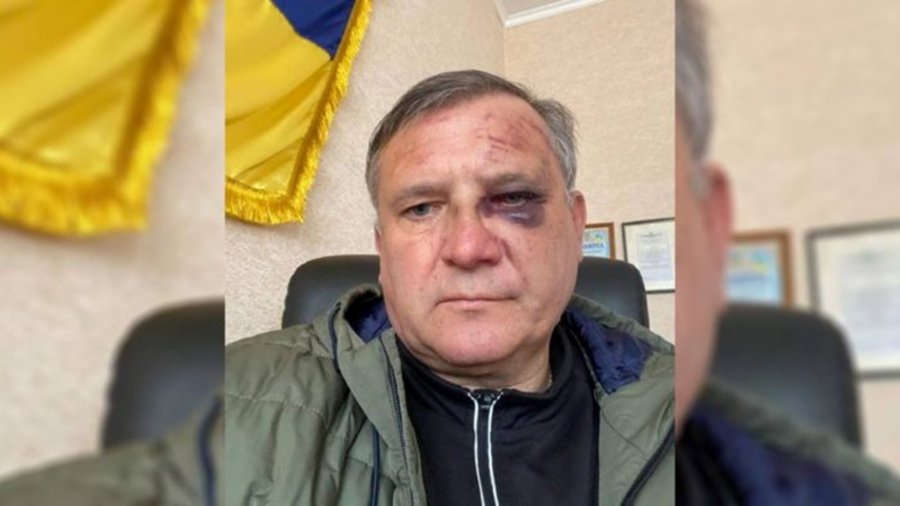 Oleksandr Kraskivsky, a local head in the Chernihiv oblast who led the residents of Zamhlai in trying to prevent the Russian invaders from entering their village was seized on 23 March and tortured for almost two days. He has horrific bruise marks over virtually all his body, but can be considered one of the luckier of an ever-mounting number of local leaders that Russia has abducted, since his torturers did not kill him.

Russians in tanks arrived at Zamhlai on 28 February, but were met by the local residents, with Kraskivsky in front, followed by the men of the settlement (a large village) and then women.  Kraskivsky, who taped the exchange on his phone, told the Russian soldier in charge that the residents would throw themselves under the tanks rather than let the invaders in.  At that stage, the Russians chose not to mow down the Ukrainians Moscow claims it is ‘liberating’.

The local residents used this brief reprieve to barricade the village, placing felled trees; tires; concrete blocks and over 20 tons of sand in bags on all the roads leading into Zamhlai.  They set up bells in the centre and agreed that, if these rang, that all the residents would form a living shield to prevent the Russian army from entering.

Kraskivsky that the Russians returned on 23 March and began dismantling the barricades.  Most of the residents gathered as agreed, and went, with Kraskivsky at the head, to the main barricade.  Kraskivsky “tried to explain to them that nobody wants to see them here, that we have a lot of elderly people, and a [psychoneurological] institution.  That was when they seized me.” 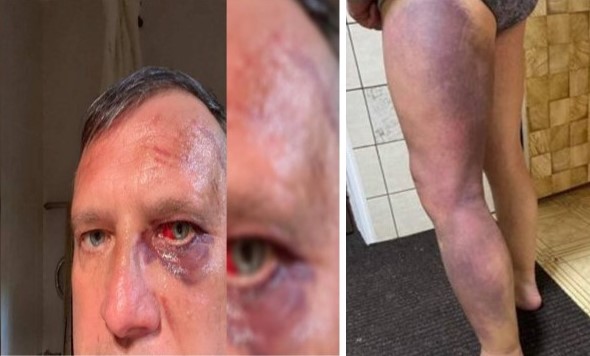 The Russians put a bag over his head, bound his hands and blindfolded him, using scotch tape.  Despite the blindfold, he told Suspilne that he understood that he had been taken to the village of Vishneve which the Russians had already occupied.  He was held there in the cellar of the local school, with the Russians ‘interrogating’ him with the use of horrific torture.  He was kicked around the kidneys, liver and face, while the torturers also threatened to chop off his fingers and to kill him.

They demanded to know about the location of Ukrainian armed units in the rear, then later forced him to name pro-Ukrainian activists.  Kraskivsky says that there were two different groups of torturers who replaced each other.  He believes that one was from the FSB, the other from GRU [Russia’s military intelligence), and, as a former military man, he is convinced that he was interrogated by professionals.  By that, he clearly means that they knew how to torture, causing maximum suffering, without killing him, and that they concealed their identity, using balaclavas. There was a rope in the cellar and he assumes that they used it with some prisoners, suspending them by their arms and legs.   He knows that there was at least one other hostage in the cellars, but did not speak with him.  He himself was held in the cellar for a day and a half, before being released.

He notes that, before they let him go, they told him that they would continue to live under the Ukrainian flag, but that the Russians would change the leadership.  Russia is, as western countries warned late last year, clearly finding local collaborators whom they instal as supposed ‘leaders’.

The Russian invaders have now retreated from areas under their control around Kyiv and in the Chernihiv oblast, with this clearly in order to intensify their attacks on other parts of Ukraine.

Suspilne with people in the liberated village of Lukashivka, to the south of Chernihiv.   Ihor has three children, one of whom cannot walk.  When the Russians came to take him away, his son tried to crawl over to the invaders, pleading with them to not hurt his father.  Ihor could scarcely speak as he described the scene, asking if the journalist could imagine how, for the Russians, that was entertainment.  Ihor says that the children will know best, but that he counted four mock executions.  The Russians ‘entertained themselves’ by forcing him down on his knees, then telling him to get up, in order for them to execute him by the wall.

His wife, Yulia, was held with the children in the cellar, however the invaders threatened to throw a grenade in, to shoot the children,  When they took her husband away, she says, they told her that she was now a widow, and that she would be next.

Some of those whom the invaders seized have simply disappeared. Antonina’s neighbour, Sashko (Oleksandr) did not return after another of these ‘executions’.  She recounts how his wife pleaded with the Russians to tell her where he was, and that they told her he was there, saying it with a smirk on their face.  Three weeks later, there is still no sign of him.