Russian invaders kill 96-year-old Ukrainian Holocaust survivor Odesa Christian, Jewish and Muslim faiths unite for Ukraine and against Russian aggression Five members of a family and people queuing for bread killed by Russian bombing of Chernihiv Russia responds to International Court order to stop bombing Ukraine by destroying Mariupol Theatre sheltering familiesRussian invaders take Mariupol intensive care hospital and its patients hostage Mass graves of the Ukrainian civilians Russia claims it is not killingTerror and abductions as Russia tries to break Ukrainian resistance in Kherson and other occupied citiesUkrainian journalist Oleh Baturin feared abducted by Russian invaders in Kherson oblast Mayor of Melitopol Ivan Fedorov abducted after refusing to collaborate with the Russian invaders Russian priest arrested and prosecuted for sermon opposing Russia’s war against Ukraine Russia effectively admits it deliberately bombed the maternity hospital in Mariupol that killed three patients, including a childRussia brings grotesque propaganda to Berdiansk after Ukrainian journalists refuse to collaborate Russian invaders murder Ukrainian volunteers Impassioned appeal from Ukrainian Muslim leader in face of Russia’s war to destroy Ukraine Russia is forcing Ukrainians from occupied Crimea and Donbas to fight in its invasion of Ukraine Children among the dead after Russian invaders opened fire on fleeing civilians Russia installs its propaganda TV after seizing Kherson and imposes 15-year sentences for reporting its invasion of UkraineUkrainian survivors of the Holocaust demand Putin and Russia get out of Ukraine Russia continues its carnage, flouting binding order from ECHR to stop bombing civilians in UkraineBabyn Yar bombed by Russia, 80 years after Nazi Massacre of Ukrainian Jews
• Topics / Freedom of conscience and religion
• Topics / Interethnic relations

Chief Rabbi of Odesa: “Ukraine is the safest country in the world for Jews” 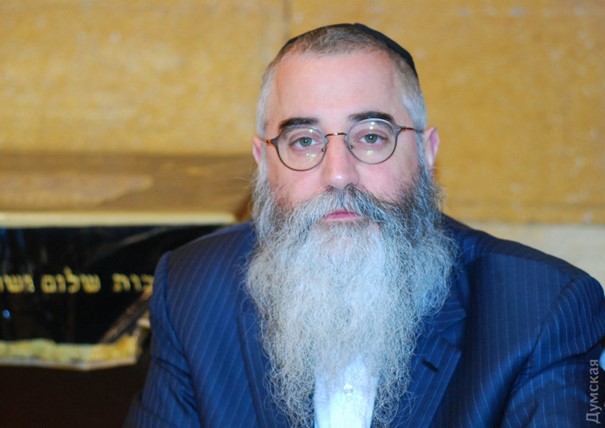 Russian leader Vladimir Putin claimed on 24 February that Russia was invading to achieve the ‘denazification’ of Ukraine.  He had already tried to use anti-Semitism as an excuse for Russa’s invasion in 2014, and been roundly condemned by Ukraine’s Jewish leaders.  He came back for more in 2022, and the lie has once again been categorically refuted by Jewish religious leaders and prominent public figures, as well as by elderly Holocaust survivors now forced to hide from Russian bombs.

In a recent appeal for peace and rejection of Russian aggression, Rabbi Avraham Wolf, Chief Rabbi of Odesa and Southern Ukraine, stated clearly that the Jewish community in Odesa was a source of envy for his fellow rabbis from other countries.

The Rabbi has just given an interview to the Odesa-based publication Dumskaya.net, in which he elaborates on just how special the situation is in all of Ukraine.

Explaining how much busier he is, as a result of the war, the Rabbi mentions obvious tasks like organizing evacuation, helping refugees, etc.  He has, however, also had to provide interviews to as many as a hundred publications, with all of them “for some reason asking me about ‘Nazism’.”

“I answer them: listen, I have been living here for thirty years but have still not learned Ukrainian and I can’t read Ukrainian documents. Do you think I have even once experienced any discomfort or discrimination because of that?  Not once.”

Rabbi Wolf explains that there are five thousand rabbis like him, from all around the world, who meet once a year and discuss various issues.  He says that his fellow rabbis envy him for all the possibilities that he has to do good deeds in Odesa.

“We open schools, kindergartens, universities; homes for the elderly.  All of that with the full support of the city and regional authorities. I know that if there are any difficulties, I can always phone the mayor, or governor, and I have no doubt that they will listen and help.  How could you talk of them ‘obstructing’, let alone of ‘infringing” [our rights]?  The state positively helps me develop the community and do good deeds!”

When they ask him in interviews about anti-Semitism in Ukraine, the Rabbi says he points to the last elections and the fact that 75%  [in fact, a little over 73%] of voters voted for a candidate born of Jewish parents.  Some argue that this means that the remaining percent voted against, to which he points out that they voted for Petro Poroshenko, who many also believe is Jewish!

More importantly, the Rabbi says that “Ukraine for a Jewish person is the safest country in the world.”  He explains that, even though he has a beard, wears a hat and, what he describes as, Jewish clothing, he walks around Odesa, feeling totally free and safe, and has never once, in all the years he has been in Odesa, encountered hostility towards him because he is Jewish. He says that he does not have such a sense of safety anywhere else in the world, not even in Israel.

That feeling of safety was, of course, until Russia’s war against Ukraine began on 24 February.  For now, Odesa has not been subjected to the horror seen in Mariupol, Kharkiv, Bucha, but that could change, and they can only pray.

Asked if his attitude to Ukraine has changed since the beginning of the war Rabbi Wolf answers:

“if previously I loved and respected the Ukrainian people, now, after the beginning of the war, I revere them!. I could never have imagined how strongly people can unite, how full of determination they can be to defend their Motherland."

He adds that, after the war, he will apply for Ukrainian citizenship, rather than the residence permit he now has, because he wants to be a full member of the Ukrainian people.  He mentions, however, that there is presently a problem since Ukraine, for the moment, does not officially allow dual citizenship and he cannot renounce his Israeli citizenship.  If a way out emerges (and there were proposals, before the war, to change the law), “I will definitely become a citizen, and that will be a great honour for me.”

A day after Putin’s cynical lies about ‘demilitarization’ and ‘denazification’ and the bombing and shelling that following, Yaakov Dov Bleich, the Chief Rabbi of Ukraine issued a statement affirming the Ukrainian Jewish community’s solidarity with Ukraine’s government and armed forces in defending Ukraine.  He wrote:

“The Jewish community is an integral part of Ukraine and stands with the Ukrainian people, government and armed forces in defending Ukraine.

The Government of Ukraine has stood by the Jewish community since Ukraine became independent in 1991.”

Rabbi Bleich was among many Jewish leaders who refuted and condemned Putin’s lies in 2014 about supposed “nationalists, extremists and anti-Semites on the streets of Kyiv. In early March 2014, he pointed out that anti-Semitic incidents in Ukraine were rare, and that the first act of anti-Semitic vandalism in Crimea had come two days after Russian troops seized control.

The current Russian regime has been pushing certain false narratives about Ukraine, including claims of rampant anti-Semitism for many years.  As well as public statements, both in Ukraine and abroad, from prominent Ukrainian Jewish figures, individual Jewish communities have, on several occasions, debunked primitive attempts to invent or fake ‘anti-Semitism’, particularly for Russian state television.   Another important voice against attempts to fabricate anti-Semitism as an excuse for Russian military aggression or information warfare has been consistently heard over the years by Viacheslav Likhachev.  He has been monitoring anti-Semitism and xenophobia in Ukraine for well over a decade, with his findings very much at odds with Moscow’s narrative.

See: The Facts about Anti-Semitism in Ukraine that Russia doesn’t want known