Charred bodies of Russian invaders" torture victims found in Kharkiv oblastRussian invaders torture local leader in Chernihiv oblast and stage mock executions “for entertainment”Russian invaders mine children’s playgrounds leaving trail of horrific war crimes Mass graves of the Ukrainian civilians Russia claims it is not killingTerror and abductions as Russia tries to break Ukrainian resistance in Kherson and other occupied citiesUkrainian journalist Oleh Baturin feared abducted by Russian invaders in Kherson oblast Mayor of Melitopol Ivan Fedorov abducted after refusing to collaborate with the Russian invaders Russian priest arrested and prosecuted for sermon opposing Russia’s war against Ukraine Russia effectively admits it deliberately bombed the maternity hospital in Mariupol that killed three patients, including a childRussia brings grotesque propaganda to Berdiansk after Ukrainian journalists refuse to collaborate Russian invaders murder Ukrainian volunteers Impassioned appeal from Ukrainian Muslim leader in face of Russia’s war to destroy Ukraine Russia is forcing Ukrainians from occupied Crimea and Donbas to fight in its invasion of Ukraine Children among the dead after Russian invaders opened fire on fleeing civilians Russia installs its propaganda TV after seizing Kherson and imposes 15-year sentences for reporting its invasion of UkraineUkrainian survivors of the Holocaust demand Putin and Russia get out of Ukraine Russia continues its carnage, flouting binding order from ECHR to stop bombing civilians in UkraineBabyn Yar bombed by Russia, 80 years after Nazi Massacre of Ukrainian Jews Russia proposes 15-year sentences and threatens "treason charges" for telling the truth about its war crimes in UkraineRussian schoolchildren told that Russia is bombing and killing Ukrainian children in ‘self-defence’
• Topics / War crimes 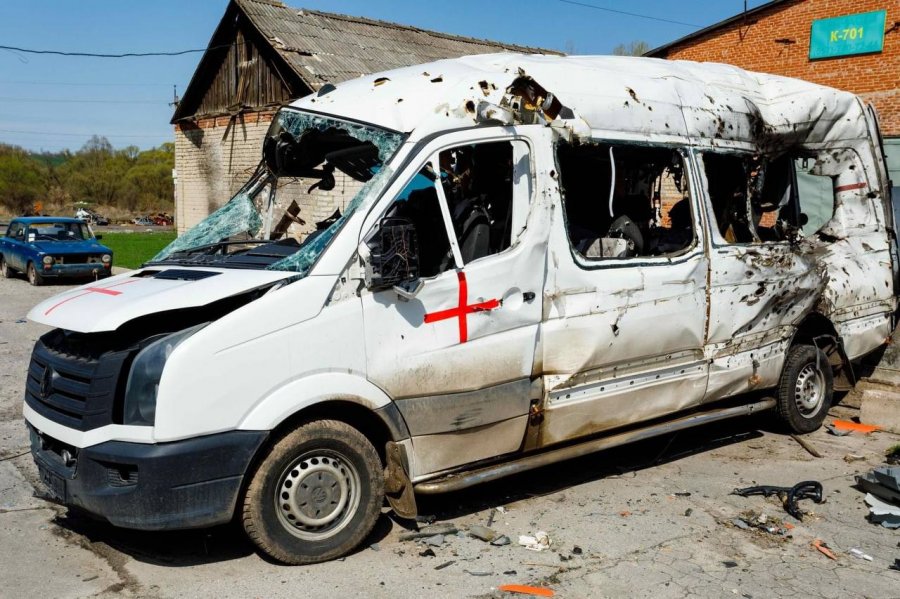 Russia shelled another residential district of Kharkiv on 15 April, killing ten people, including a 7-month-old infant, injuring 3 other children and 32 adults. “The world’s second army, it would seem, is only able to fight civilians”, was how Oleh Syniehubov, Head of the Kharkiv Regional Military Administration, reported this new crime.

On 14 April, the Kharkiv Regional Prosecutor’s Office also reported the deaths of seven civilians killed when the Russian invaders shelled two evacuation coaches trying to leave Borova, a town in the Izium raion.  The coaches were fired upon on 14 April, with initial information speaking of seven civilians killed and a further 27 injured.  The prosecutor has initiated a criminal investigation under violation of the law and practice of war (Article 438 § 2 of Ukraine’s Criminal Code).

Unfortunately neither of the above-mentioned crimes are in any way exceptional.  Russia is not giving up attempts to gain control of Kharkiv and the Kharkiv oblast, and appears to be avenging itself for its failure to do so by constantly, although erratically, bombing and shelling residential areas and other civilian targets.

Syniehubov reported on 14 April that there had been 34 airstrikes and shelling of districts in Kharkiv over the last 24 hours, with one person killed and eight injured.  The previous day, shelling of several residential districts of the city had killed four civilians and injured ten others.  In all these, and earlier, cases, the Russians would have been aware that their victims were civilians.

Suspilne reported on 11 April that the Russians had dropped delayed action mines on the city at around 1 a.m.  These work on timers and can explode at any time.  The mines had, fortunately, been identified and attempts were underway to defuse them. In the Kyiv oblast, Ukrainian forces discovered that the retreating Russian invaders had mined children’s play areas and other obviously civilian sites, and it is likely that they are using similar criminal practice wherever they gain control of an inhabited area.

As of 14 April, 503 civilians had been killed in the Kharkiv oblast, including 24 children. Syniehubov was doubtless speaking for the vast majority of Ukrainians when he added that there would be no forgiveness for any of these deaths of innocent civilians.