Russian invaders torture local leader in Chernihiv oblast and stage mock executions “for entertainment”Russian invaders mine children’s playgrounds leaving trail of horrific war crimes Mass graves of the Ukrainian civilians Russia claims it is not killingTerror and abductions as Russia tries to break Ukrainian resistance in Kherson and other occupied citiesUkrainian journalist Oleh Baturin feared abducted by Russian invaders in Kherson oblast Mayor of Melitopol Ivan Fedorov abducted after refusing to collaborate with the Russian invaders Russian priest arrested and prosecuted for sermon opposing Russia’s war against Ukraine Russia effectively admits it deliberately bombed the maternity hospital in Mariupol that killed three patients, including a childRussia brings grotesque propaganda to Berdiansk after Ukrainian journalists refuse to collaborate Russian invaders murder Ukrainian volunteers Impassioned appeal from Ukrainian Muslim leader in face of Russia’s war to destroy Ukraine Russia is forcing Ukrainians from occupied Crimea and Donbas to fight in its invasion of Ukraine Children among the dead after Russian invaders opened fire on fleeing civilians Russia installs its propaganda TV after seizing Kherson and imposes 15-year sentences for reporting its invasion of UkraineUkrainian survivors of the Holocaust demand Putin and Russia get out of Ukraine Russia continues its carnage, flouting binding order from ECHR to stop bombing civilians in UkraineBabyn Yar bombed by Russia, 80 years after Nazi Massacre of Ukrainian Jews Russia proposes 15-year sentences and threatens 'treason charges' for telling the truth about its war crimes in UkraineRussian schoolchildren told that Russia is bombing and killing Ukrainian children in ‘self-defence’ Putin miscalculated. Russia is fighting “an army of 40 million Ukrainians”
• Topics / War crimes 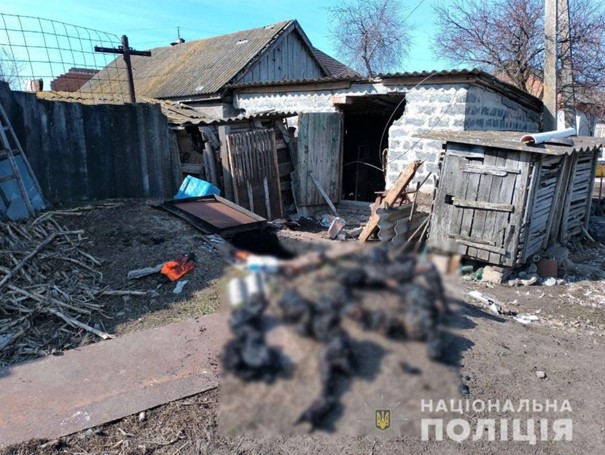 It is increasingly clear that harrowing discoveries should be expected in all parts of Ukraine that have, however temporarily, fallen under Russian occupation.  In the recently liberated Kharkiv oblast village of Husarivka, the regional police reported on 8 April 2022 that the Russians had used a basement as a torture chamber, with one of the victims killed a child.

Husarivka, which has a population of around 500, was liberated by the Ukrainian Armed Forces on 4 April.  The police began searching the village and discovered in a basement the bodies of three tortured civilians, one of whom they describe as a child, without specifying the child’s likely age.  The police say that they are currently trying to establish the identity of the victims whose bodies showed signs of prolonged ill-treatment and torture.  The police report states that the people were burned alive, however a criminal investigation announced by the prosecutor over war crimes (Article 438 § 2 of Ukraine’s Criminal Code) says that the three local residents, discovered on 7 April,  were tortured and that the Russians then covered their bodies with car tires and set them alight, in an obvious attempt to conceal the crime.  The courtyard where the bodies were found is believed to have been used by the invaders as their military command point.

In another place, the body was found of a male paramedic who worked at the hospital.  The man’s hands were tied behind his back and the bruises to his body and face suggest that he too was tortured before, seemingly, being shot and killed.

The police also report finding a car with the bodies of a couple and their three-year-old child on a road near Husarivka.   They died from artillery fire.

A number of residents have also disappeared without trace.  After speaking with local residents, the police report that, like in Kyiv oblast, the invading forces behaved with arrogance, robbing residents; stealing their vehicles and prohibiting them from leaving their homes.

The Kharkiv Regional Prosecutor reported on 8 April that they have initiated over 500 criminal investigations, either over crimes against the laws and customs of war, or against national security (with the latter probably against Ukrainians suspected of collaborating with the invaders.  They point out that 30 Russians have been captured.

In a recent interview, Oleh Siniehubov,  Kharkiv Oblast Governor, reported receiving information about atrocities and mentioned the Russians’ attack on a hospital in Balakliia (Izium raion).  He explained that a tank had driven up to the Central Raion Hospital and had fired at the building, effectively destroying the hospital.  Despite this, the Russian invaders then called on the Chief Doctor to ensure that the hospital continued functioning.  “Of course, they received the reply that they were themselves destroying civilian infrastructure and then trying to claim that they had come to liberate someone!”

There were 18 patients who were in a serious condition after operations but, thanks to the courageous work of emergency medical staff, the Ukrainian authorities managed to evacuate all of them without loss of life.

The Russians, Siniehubov said, are also carrying out tactics seen in Mariupol, with areas cut off from electricity, transport and mobile communications, while the invaders refuse to agree safe corridors to enable people to flee.

On 8 April, Russia tried, very unsuccessfully, to deny responsibility for bombing the Kramatorsk Railway Station and killing at least 52 people who were trying to flee the feared Russian advance on the city.  The reason is clear since this was a heinous war crime.

The same can, however, be said of any deliberate targeting of civilians, and Russia has been doing nothing but that in Kharkiv, Mariupol, Chernihiv and other Ukrainian cities since the beginning of its full invasion.

On 9 April, for example, the Russians bombed a residential area causing serious damage to a five-storey apartment block.  During the 24 hours until around midday on 10 April, the Russians shelled the centre of Kharkvi as well as several districts of the city, with nine people injured.  The Russians also attacked the Kharkiv oblast town of Derhachi and area around it, killing two people and injuring others.  In reporting these new attacks, Siniehubov wrote  “As can be seen, the Russian army is continuing “to fight” the civilian population as it has no victories on the front”.

Russia has, by no means, abandoned its goal of capturing Kharkiv, Siniehubov stressed on 9 April, however it has failed as it did in the Kyiv oblast.  This really does seem to be the reason for the daily airstrikes and shelling of different civilian targets in the Kharkiv and Kharkiv oblast.   In reporting earlier strikes on residential areas, Siniehubov pointed out that the enemy is using “chaotic attacks on civilian infrastructure to try to demoralize the Ukrainian population” – those whom it does not kill.