Russia continues "liberating" Ukraine by killing a baby and civilians trying to flee Kharkiv oblast Charred bodies of Russian invaders" torture victims found in Kharkiv oblastRussian invaders torture local leader in Chernihiv oblast and stage mock executions “for entertainment”Russian invaders mine children’s playgrounds leaving trail of horrific war crimes Mass graves of the Ukrainian civilians Russia claims it is not killingTerror and abductions as Russia tries to break Ukrainian resistance in Kherson and other occupied citiesUkrainian journalist Oleh Baturin feared abducted by Russian invaders in Kherson oblast Mayor of Melitopol Ivan Fedorov abducted after refusing to collaborate with the Russian invaders Russian priest arrested and prosecuted for sermon opposing Russia’s war against Ukraine Russia effectively admits it deliberately bombed the maternity hospital in Mariupol that killed three patients, including a childRussia brings grotesque propaganda to Berdiansk after Ukrainian journalists refuse to collaborate Russian invaders murder Ukrainian volunteers Impassioned appeal from Ukrainian Muslim leader in face of Russia’s war to destroy Ukraine Russia is forcing Ukrainians from occupied Crimea and Donbas to fight in its invasion of Ukraine Children among the dead after Russian invaders opened fire on fleeing civilians Russia installs its propaganda TV after seizing Kherson and imposes 15-year sentences for reporting its invasion of UkraineUkrainian survivors of the Holocaust demand Putin and Russia get out of Ukraine Russia continues its carnage, flouting binding order from ECHR to stop bombing civilians in UkraineBabyn Yar bombed by Russia, 80 years after Nazi Massacre of Ukrainian Jews Russia proposes 15-year sentences and threatens "treason charges" for telling the truth about its war crimes in Ukraine
• Topics / War crimes 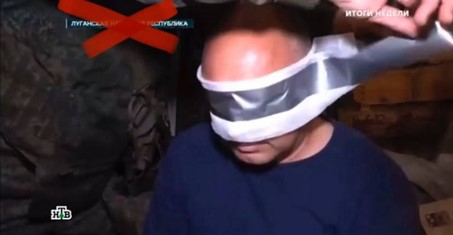 Two days after Russian forces fired on evacuation buses in Popasna (Luhansk oblast), the volunteer driver of one of the buses has been forced to appear on a propaganda video for Russian television.  The other bus, which was carrying humanitarian aid, has vanished.

Luhansk Regional Governor Serhiy Haidai reported on 1 May that the driver, Mykhailo Pankiv, had been found, in Russian custody, two days after the invaders shelled evacuation transport in Popasna.  Ukrainian soldiers had gone to the scene after the shelling, but found only one bloodstained but empty bus.  He explained that there is no sign of the second bus which was carrying humanitarian aid, but was due to collect people on the way back.  All contact with the driver has been lost.

Haidai first explained early on 30 April that 31 people had been evacuated from Popasna, but that, since there were more people who wanted to leave, they had sent two buses back to the city, one of them with humanitarian aid.  They knew that they had reached Popasna before coming under fire.

It became clear that at least Pankiv had been seized by the Russians on 1 May after NTV, one of the most notorious Russian propaganda channels, broadcast a video of an ‘interview’ with the Ukrainian driver.  Haidai is doubtless correct in stating that Pankiv was forced by his captors to say that the Ukrainian authorities were not evacuating people and that they had left them to their own devices.  “Lies which Russians just live on.  They kill, lie and destroy”.

From numerous other such propaganda videos over the past eight years,  there are, unfortunately, strong grounds for fearing that Pankiv was tortured, or perhaps threatened, into repeating the lies.  Haidai explains that Pankiv is a school history teacher who has for many weeks now been helping Popasna residents from fleeing to safety, as well as taking food to those in need.  He had already come under fire on several occasions, but continued his work until seized by the invaders.

It is also disturbing, Haidai adds, that the Russians have seized a school bus and could use it to stage some kind of false flag stunt. 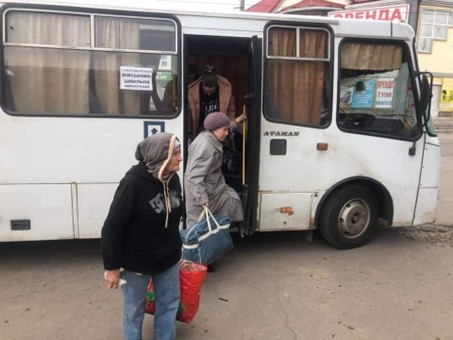 Haidai has been urging residents of all of government-controlled Luhansk oblast to evacuate for several weeks now, for their own safety and to enable the Ukrainian Armed Forces to defend the oblast against a major Russian offensive.  He stated on 30 April that, despite the loss of the two buses in Popasna and another bus in Rubizhne, they were continuing to evacuate people every day,

On 21 April, Ukraine’s Military Intelligence [HUR] reported that they had intercepted a conversation between the Russian invaders essentially ordering the killing of almost all Ukrainian prisoners of war.  The order is to “release them forever, forever, so that nobody, including their families ever see them again”.  HUR points out that this is a clear war crime, for which those responsible will be held to answer.

Just before beginning Russia’s total invasion and war against Ukraine, Russian leader Vladimir Putin enacted a farce in which he pretended to seek advice from high-ranking officials and then ‘recognized’ the Russian proxy ‘Donetsk and Luhansk people’s republics’.  It was clear even then that this was an effective statement of war since he said that Russia ‘recognized’ these illegal armed formations, not as they existed then (over around one third of Donbas), but covering the entire Donetsk and Luhansk oblasts.   While it is these that Russia is claiming as its excuse for bombing and killing civilians throughout most of Ukraine, it has also seized parts of the Kherson and Zaporizhzhia oblasts which it is clearly not planning to give up.