Ukrainian Holocaust survivor dies in a Mariupol basement, seeking refuge from Russian bombsChief Rabbi of Odesa: “Ukraine is the safest country in the world for Jews” Russian invaders kill 96-year-old Ukrainian Holocaust survivor Odesa Christian, Jewish and Muslim faiths unite for Ukraine and against Russian aggression Five members of a family and people queuing for bread killed by Russian bombing of Chernihiv Russia responds to International Court order to stop bombing Ukraine by destroying Mariupol Theatre sheltering familiesRussian invaders take Mariupol intensive care hospital and its patients hostage Mass graves of the Ukrainian civilians Russia claims it is not killingTerror and abductions as Russia tries to break Ukrainian resistance in Kherson and other occupied citiesUkrainian journalist Oleh Baturin feared abducted by Russian invaders in Kherson oblast Mayor of Melitopol Ivan Fedorov abducted after refusing to collaborate with the Russian invaders Russian priest arrested and prosecuted for sermon opposing Russia’s war against Ukraine Russia effectively admits it deliberately bombed the maternity hospital in Mariupol that killed three patients, including a childRussia brings grotesque propaganda to Berdiansk after Ukrainian journalists refuse to collaborate Russian invaders murder Ukrainian volunteers Impassioned appeal from Ukrainian Muslim leader in face of Russia’s war to destroy Ukraine Russia is forcing Ukrainians from occupied Crimea and Donbas to fight in its invasion of Ukraine Children among the dead after Russian invaders opened fire on fleeing civilians Russia installs its propaganda TV after seizing Kherson and imposes 15-year sentences for reporting its invasion of UkraineUkrainian survivors of the Holocaust demand Putin and Russia get out of Ukraine
• Topics / War crimes 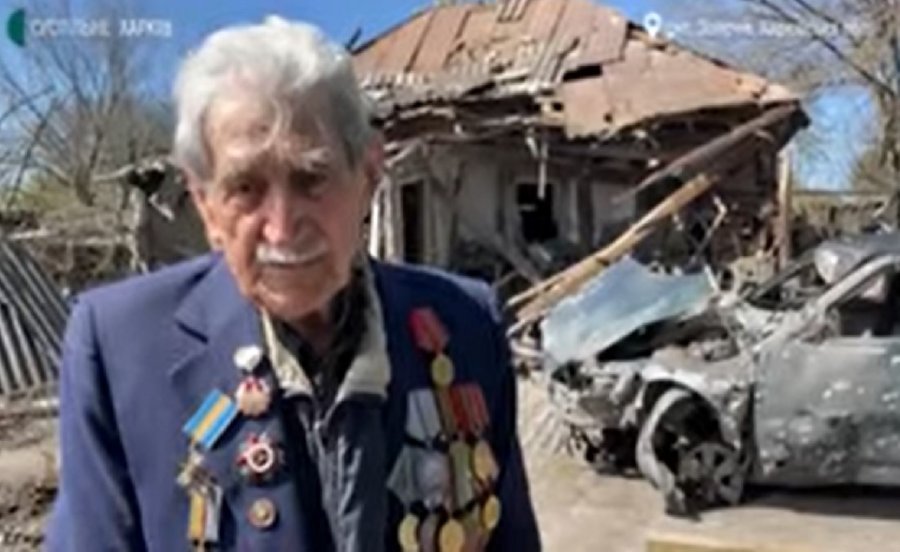 While Russia prepares a grandiose display of military firepower in Moscow for the 77th anniversary of Victory Day, its soldiers are aiming their firepower against Ukrainian World War II veterans, Holocaust survivors and other civilians.  97-year-old Ivan Lysun from Zolochiv, in the Kharkiv oblast, has been left with his jacket and the many medals he received for courage and his military service when he fought, together with Russians, against the Nazi invaders, and very little else.

In the early hours of 4 May, Russian shelling almost totally destroyed the house which, as a small lad, Ivan Lysun tried to help his father build.  Most of it has been turned into rubble, and it is a miracle that he survived.

Natalia Khoruzha told Suspilne TV about the terrible seconds when she feared that her father had been killed.  She had been sheltering in their neighbours’ cellar when there was a shattering crash.  The lights went off and then the building began crashing down around them.  Fortunately, their neighbour was outside and able to drag them out.  Natalia began calling out for her father and panicked when there was silence.  They found the 97-year-old alive, although dazed and unable to say a word, just looking around in disbelief at what were the ruins of his home.

Later, when talking to the Suspilne correspondent, Ivan Lysun spoke of the intense pain he feels and stresses that they fought to liberate Ukraine.  He adds that, if he had the strength, he would be the first to join the defence to help Ukraine’s Armed Forces.  He is dismissive of relatives in Russia who claim that they don’t know anything, when Ukrainians are suffering like this.  He says he hasn’t any pity, “not one gram”.

Since Vladimir Putin first came to power, Russia has been systematically mythologizing the Second World War (or the reinstated term, the ‘Great Patriotic War’, from 1941-1945). It has become dangerous in Putin’s Russia to speak openly about, for example, the collaboration between Stalin and Hitler in carving up Poland in 1939 and right up until Hitler’s invasion of Ukraine;  about the crimes committed by Soviet soldiers and Stalin’s repression and incompetence as key causes for the massive losses which the Soviet Army sustained.  Russia has been increasingly ‘Russifying’ the USSR’s victory over Nazi Germany, with such efforts escalating in parallel with its military aggression against Ukraine.

In 2014, the Kremlin still tried, at least in public rhetoric, to make the new government in Kyiv the enemy, rather than the Ukrainian people.  To some extent, Putin’s claim on 24 February that the so-called ‘special military operation’ was aimed at ‘the demilitarization and denazification of Ukraine’ was a rehash of that same narrative.  Some commentators suggest that Putin genuinely believed his sycophantic advisers who assured him that Kyiv would fall in a day or two and that Ukrainians would somehow greet the invaders as ‘liberators’.  If so, then he learned swiftly that this was not the case, which may well explain the savagery of the attacks on cities, like Kyiv and Kharkiv, that Russia could not take, and on the civilian population.

The Russian invaders have already killed at least two Holocaust survivors. Boris Romantschenko had survived four Nazi concentration camps, only to be killed when the Russians bombed his Kharkiv apartment.  Vanda Obiedkova, had been saved as a child from the Nazi invaders of Mariupol and died when the Russians besieged the city in 2022.  She had been constantly pleading for water which her daughter and son-in-law had to risk their lives trying to obtain, as the Russians had destroyed all of the city’s infrastructure and a Russian sniper was positioned by the nearest source of drinking water.

These are the victims whose stories are known.  The real scale of the tragedy is almost certainly much greater.  There are parts of the Kharkiv, Donetsk and Luhansk oblasts, for example, where Russia is constantly shelling or bombing residential areas.  It is often the elderly who do not want to leave their homes or are simply unable to, either because they move with difficulty or because they have nowhere to go.

As reported, Russia’s use of terms like ‘denazification’ and ‘genocide’ as pretext for their invasion, carnage and destruction has been condemned, among others by Ukrainian Holocaust survivors; Ukrainian Jewish leaders and by international Holocaust organizations.  It has apparently not been especially understood by Russians themselves, but the number of those willing to speak out in protest, remains pitifully small.

Certainly Russian state media flagrantly conceal and / or distort the facts, especially with respect to the ongoing bombing and shelling of civilian targets.  Very many Russians do, however, know perfectly well how to bypass the blocking of Internet media; have friends or relatives in Ukraine, or have / had relatives sent to fight in Ukraine.  It is, presumably, easier to ‘not know’ when the truth reveals the crimes that Russia is committing against innocent civilians and when Russia’s territorial aggression is ominously reminiscent of that which Ukraine suffered from the Nazis 80 years ago.