Ukrainian Holocaust survivor dies in a Mariupol basement, seeking refuge from Russian bombsChief Rabbi of Odesa: “Ukraine is the safest country in the world for Jews” Russian invaders kill 96-year-old Ukrainian Holocaust survivor Odesa Christian, Jewish and Muslim faiths unite for Ukraine and against Russian aggression Five members of a family and people queuing for bread killed by Russian bombing of Chernihiv Russia responds to International Court order to stop bombing Ukraine by destroying Mariupol Theatre sheltering familiesRussian invaders take Mariupol intensive care hospital and its patients hostage Mass graves of the Ukrainian civilians Russia claims it is not killingTerror and abductions as Russia tries to break Ukrainian resistance in Kherson and other occupied citiesUkrainian journalist Oleh Baturin feared abducted by Russian invaders in Kherson oblast Mayor of Melitopol Ivan Fedorov abducted after refusing to collaborate with the Russian invaders Russian priest arrested and prosecuted for sermon opposing Russia’s war against Ukraine Russia effectively admits it deliberately bombed the maternity hospital in Mariupol that killed three patients, including a childRussia brings grotesque propaganda to Berdiansk after Ukrainian journalists refuse to collaborate Russian invaders murder Ukrainian volunteers Impassioned appeal from Ukrainian Muslim leader in face of Russia’s war to destroy Ukraine Russia is forcing Ukrainians from occupied Crimea and Donbas to fight in its invasion of Ukraine Children among the dead after Russian invaders opened fire on fleeing civilians Russia installs its propaganda TV after seizing Kherson and imposes 15-year sentences for reporting its invasion of UkraineUkrainian survivors of the Holocaust demand Putin and Russia get out of Ukraine
• Topics / War crimes

Even in Russia, Putin’s ‘denazification’ claims prove no excuse for war against Ukraine 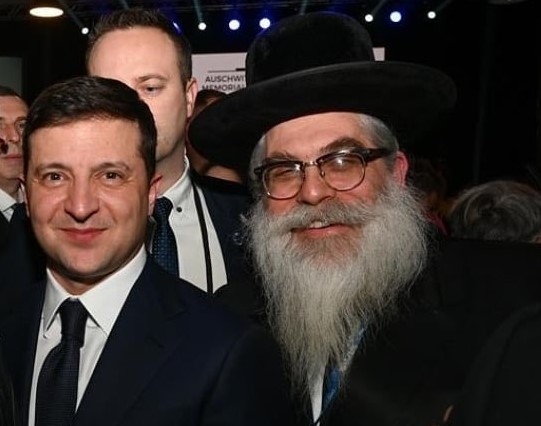 ‘The Project’, one of the few independent (and effectively banned) Russian media has published a damning report on the ‘mess’ around Russia’s total war against Ukraine.  It describes, among other things, the Kremlin’s retreat from the term ‘denazification’ and the general confusion as to what Russia is trying to achieve.  Russian leader Vladimir Putin’s claim on 24 February that Russia’s aims were “the demilitarization and denazification of Ukraine” has aroused outrage in many quarters, including from Holocaust remembrance and education organizations.  The Project, however, reports that the Kremlin quietly commissioned a public survey which found that Russians do not understand what is meant by ‘denazification’ and even have problems pronouncing the word.

The Project (Project Media inc.) was outlawed (as ‘an undesirable organization’) last summer.  Its Chief Editor Roman Badanin explains that he and colleagues closed down then and created ‘an agency’ for the safety, both of Project authors, and of those who circulated its material, and could also end up prosecuted.  Badanin notes, however, that Russia’s invasion of Ukraine and the latest escalation of repression have made such caution senseless. In today’s Russia (and occupied Crimea), you can end up in prison for any truthful material, whether published by a ‘desirable’ or an ‘undesirable’ organization.  That does, of course, make it particularly unlikely that their sources would ever be willing to go public.

The article published on 4 May is presented as the first part of an investigation on how “Russia proved unprepared for the war it was preparing for”, and other aspects will be discussed separately.

The authors explain that since Putin’s address on 24 February was prepared in secret, the terms used could not be worked on by specialists,  with Russian propagandists left to endlessly reiterate ‘denazification’.   They explain that it rapidly became clear that this was an unfortunate term.  Around a week after Russia began its full invasion, the Kremlin asked its sociologists to carry out non-public telephone surveys, with these including a question about Russians’ attitude to the main tenets of the propaganda.  According to four sources (a high-ranking media manager and a sociologist and political spin doctors close to the Kremlin), the respondents were unable to explain what is meant by ‘denazification’.  One of the sources added that people had problems even pronouncing the word.

“As a result, the authorities decided to sharply decrease use of the word ‘denazification’ on the air, but could not totally renounce it – you couldn’t simply forget the objective articulated by the president. “

The authors cite, as an example, Putin’s chief propagandist Dmitry Kiselyov’s weekly program [Vesti nedeli].  During the first episode after the invasion, Kiselyov spent at least seven minutes explaining the meaning of ‘denazification’. During the April broadcasts, he either didn’t mention it at all, or used the terms once per broadcast.

At the end of March 2022, the Financial Times reported that “Russia is no longer requesting Ukraine be ‘denazified’ as part of ceasefire talks” and noted that “three of Russia’s initial core demands — “denazification”, “demilitarisation” and legal protection for the Russian language in Ukraine” were not mentioned.

Russia has long invested money and propaganda effort in pushing the claim that Ukrainians are ‘fascists’ and anti-Semites, with Putin using such labels to justify Russia’s invasion of Crimea and Donbas in 2014.  The claims then were roundly rejected by Ukrainian Jewish religious and public figures, so Putin’s attempt to rehash them in 2022 seemed especially cynical (or desperate).  If some western commentators were prepared to repeat some of the lies back in 2014, the situation was quite different now.  It was clear that Putin’s claims could in no way justify Russia’s barbaric bombing and killing of civilians, nor other widespread war crimes. Outside Russia, they were almost universally understood to be absurd given the minimal support, during democratic elections, for any far-right candidates in Ukraine, as well as the record-breaking majority received in 2019 by President Volodymyr Zelensky who is Jewish, and whose grandfather fought the Nazis throughout World War II.

The Kremlin may have toned down its ‘denazification’ narrative for local consumption and has made it dangerous for anybody in Russia or occupied Crimea to ask inconvenient questions.

It cannot avoid such questions abroad, and Foreign Minister Sergei Lavrov’s response to one such question on 1 May has led to international outrage, especially from Israel.  During an interview on Italian TV, Lavrov was asked how Russia can claim that its aim is to ‘denazify’ a country with a democratically-elected Jewish President.  Lavrov said he might be wrong, but he thinks Adolf Hitler had Jewish blood, and that “wise Jewish people say that the most ardent anti-Semites are usually Jews”.

Instead of backing down in the face of very strong protest from Israel and from Yad Vashem, Lavrov’s ministry accused his Israeli counterpart of “anti-historical statements” and said that these “largely explain the course of the current Israeli Government support of the neo-Nazi regime in Kyiv.”

Worth noting that even Russia’s Chief Rabbi Berel Lazar, who has, over the last eight years, tolerated all of Russia’s lies, propaganda and aggression against Ukraine, called Lavrov’s words “shocking” and said that it would be good if he apologize.

Lavrov’s words were appalling, and bemusement at claims that a country that has recently had both a Jewish Prime Minister and, now, a Jewish President, is certainly understandable.

There are, however, plenty of other arguments against Russia’s constant attempts to ‘play the anti-Semitism [or neo-Nazi] card’. In early March 2014,  Rabbi Yaakov Dov Bleich stated clearly that anti-Semitic incidents in Ukraine are rare, but added just why they were expecting false flag stunts. “We anticipate that the Russians will want to justify their invasion of Ukraine.  They are already claiming in the media that Bandera supporters are running about and attacking synagogues, yet none of this is happening. There could be provocation – somebody may dress up as a Ukrainian nationalist and start beating up Jewish people. I am not afraid to draw such an analogy - this is what the Nazis did during the Austrian Anschluss.”

In an interview to the Odesa-based publication Dumskaya.net, Rabbi Avraham Wolf, Chief Rabbi of Odesa and Southern Ukraine, has said that the Jewish community in Odesa is a source of envy for his fellow rabbis from other countries.

He says that “Ukraine for a Jewish person is the safest country in the world.”  He explains that, even though he has a beard, wears a hat and, what he describes as, Jewish clothing, he walks around Odesa, feeling totally free and safe, and has never once, in all the years he has been in Odesa, encountered hostility towards him because he is Jewish. He says that he does not have such a sense of safety anywhere else in the world, not even in Israel.

Asked if his attitude to Ukraine has changed since the beginning of the war Rabbi Wolf answers: “if previously I loved and respected the Ukrainian people, now, after the beginning of the war, I revere them!. I could never have imagined how strongly people can unite, how full of determination they can be to defend their Motherland."

Would the Kremlin call them ‘neo-Nazis’ also?

Moscow’s use of the terms ‘genocide’ and ‘denazification’ has also been condemned by Holocaust organizations. On 28 February, members of the international remembrance committees of Auschwitz, Buchenwald-Dora, Dachau and other Nazi concentration and death camps, issued an appeal, demanding an end to the war.  They condemned Moscow’s cynical abuse of Shoah and the memory of its victims in its propaganda.

On 11 April, 17 Holocaust museums from four countries took out a full-page statement in the New York Times, calling on the world to do more to stop Russian atrocities and war crimes in Ukraine.

We call upon our governments around the world to do more to stop these atrocities and assist those who have been brutalized. We support the International Criminal Court’s investigation of war crimes, crimes against humanity, and genocide.”