Russian invaders are killing abducted local leader in Kherson oblast, with terror methods escalating Russian soldiers shoot at Kherson protesters demanding that Russia get out of Ukraine Terror and abductions as Russia tries to break Ukrainian resistance in Kherson and other occupied citiesUkrainian journalist Oleh Baturin feared abducted by Russian invaders in Kherson oblast Mayor of Melitopol Ivan Fedorov abducted after refusing to collaborate with the Russian invaders Russian priest arrested and prosecuted for sermon opposing Russia’s war against Ukraine Russia effectively admits it deliberately bombed the maternity hospital in Mariupol that killed three patients, including a childRussia brings grotesque propaganda to Berdiansk after Ukrainian journalists refuse to collaborate Russian invaders murder Ukrainian volunteers Impassioned appeal from Ukrainian Muslim leader in face of Russia’s war to destroy Ukraine Russia is forcing Ukrainians from occupied Crimea and Donbas to fight in its invasion of Ukraine Children among the dead after Russian invaders opened fire on fleeing civilians Russia installs its propaganda TV after seizing Kherson and imposes 15-year sentences for reporting its invasion of UkraineUkrainian survivors of the Holocaust demand Putin and Russia get out of Ukraine Russia continues its carnage, flouting binding order from ECHR to stop bombing civilians in UkraineBabyn Yar bombed by Russia, 80 years after Nazi Massacre of Ukrainian Jews Russia proposes 15-year sentences and threatens "treason charges" for telling the truth about its war crimes in UkraineRussian schoolchildren told that Russia is bombing and killing Ukrainian children in ‘self-defence’ Putin miscalculated. Russia is fighting “an army of 40 million Ukrainians” Chief Rabbi of Ukraine demolishes Putin’s excuse for Russia’s invasion
• Topics / War crimes 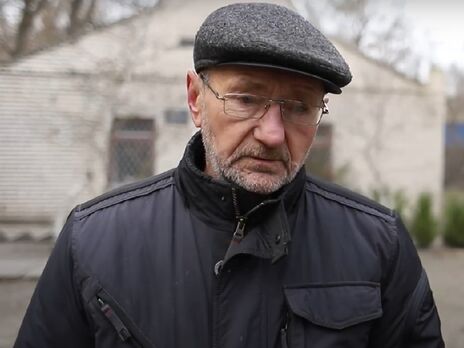 Viktor Maruniak, Village Head of Stara Zubrivka in Kherson oblast was abducted by the Russian invaders on 21 March, his 60th birthday.  He was held and tortured for three weeks, with the torture something that his captors seemed to “somehow get pleasure from”.  He was eventually released, possibly thanks to the publicity over his abduction, and is now receiving treatment abroad for the injuries he sustained during his ordeal.  At least one young Ukrainian, Nikita, who was seized and tortured at the same time, remains in Russian custody, and there is reason to fear for his safety.

Maruniak had been visiting elderly people, families with children, etc. to find out what they needed when his wife phoned, at around 5 p.m. on 21 March to say that the Russian military were waiting for him.  They made him get into their car, but claimed that he would soon return.

He was taken to the home of an elderly woman, Zinaida Chebotar, whose son, Andriy, was the first person from Stara Zubrivka killed defending Ukraine following the total invasion.  The Russians had now come for her 28-year-old grandson Nikita who had already been beaten when Maruniak was brought in, together with two other local men who had also been taken prisoner.  It was in the 82-year-old lady’s courtyard that Maruniak was beaten for the first time, with the Russians claiming that he was the ‘leader of a sabotage group’ and that the others were members of it.

The four men were first held, and constantly beaten, for three days and nights in concrete premises where, he says, the first night they were forced to sleep on their feet, and they were prevented from speaking to each other.

Maruniak explains that the Russians clearly had no understanding of what it means to be the elected head of a village of 2,5 thousand people.  “They decided I was the leader of a big sabotage network and they were interested in weapons.  All the time, they wanted to know about machine guns.”

In fact, Maruniak clearly views this as a pretext.  Russian soldiers had already turned up in their village once before and he had seen that they were shocked by the invasion and kept trying to convince Maruniak that they were just pawns, that they were obeying orders, etc.

On the eve of his abduction, Maruniak says that he read, and is sure that they Russians had also read about another Russian swift response unit in Kyiv oblast being sent to the front and killed there.  His captors, he believes, needed to demonstrate that they were ‘needed’ in Kherson oblast where they were safer, hence the abductions and claims of a sabotage group.

The men received small amounts of food and a glass of tea just once a day.  The Russians would put a pistol to their head, threatening to shoot “if you don’t tell”.  Or they would point the gun at one of them, and say that they’d shoot him dead if they didn’t “tell”.

They were also forced to undress and held without clothes for up to three hours.  The Russians would beat two or three men at the same time. Maruniak, who is not a young man, notes that there is some kind of protective mechanism in the organism which enables you to endure what you would have imagined was unendurable.

On the fourth day, the Russians put bags over their heads and took them to Kherson where they were not only beaten, but tortured with electric currents.  Maruniak recalls that “they somehow do all that with pleasure.”   They would initially attach the currents to the big fingers, but would then decide that this was not enough and would instead attach the wires to their victims toes, while pouring water over the person’s head so that it trickled down their back, with this spreading and intensifying the pain. Maruniak says that, in fact, he was in such a bad state from the beating that he does not even remember the pain from the electric shocks.

When he was finally taken to a SIZO [remand prison], an x-ray found that he had pneumonia, nine broken ribs and wounds to his body that a month and a half later, were still resisting treatment.  His torturers had beaten, kicked and used a baton against essentially all parts of his body, except his head which they avoided since that shows.

He was held in a cell alone, but knows that the men he was seized with were still alive when he was finally released.  There were several interrogations with the Russians asking the same things over and over again, with all of this clearly to show they were doing something.

On 12 April, he was taken to a person he assumes was from the FSB [Russia’s security service] who informed him that “I have no more grounds to hold you here”.  He only learned later that human rights groups had raised the alarm and that there had been intervention, including from the UN and Red Cross.

The above was only the physical torture Maruniak was forced to endure.  The Russians also tried to convince him that his wife had renounced him and threatened “problems” for his daughters and grandchildren.  His wife, in turn, was told that Maruniak had already “earned”  a 20-year sentence and that she would never see him again.  For three weeks, that was the only indication, if that it was, that he was, at least, alive.  There were two ‘searches’ which were, in effect, looting sprees with the Russians arriving and stealing everything they could find, and breaking the furniture that they didn’t take.

The Russians returned most of Maruniak’s documents, but not his work record which he needs in order to organize his pension.  His wife also had almost all documents removed, with the invaders returning only her internal passport.

In an interview to Suspilne published on 12 May, Maruniak reported that the Russians had just tried to come for him again, Fortunately, he and his wife were safely out of the Russians’ reach by that stage, though both are clearly devastated to have been forced to leave their home.  Maruniak mentions Nikita, whose grandmother now knows that her son, Andriy, was killed defending Ukraine and is just waiting in hope that they will return her grandson.  Viktor Maruniak stresses that “Nikita is Ukraine’s future” and that it is vital that he is released in a prisoner exchange.

There are a huge number of people who have been seized by the Russians in Kherson oblast, including the Head of Hola Prystan, Oleksandr Babych, who has been held hostage for well over two months.

In a later interview, Maruniak explained that he saw no choice but to leave, as he would be unable to work and was not willing to collaborate with the Russians.  The latter, he adds, are having big problems.  To his knowledge, none of those in the local self-government in their community has agreed to collaborate.

Asked what discoveries or conclusions he has reached as a result of his encounters with the invaders, Maruniak replied:

“First and foremost, I don’t think this is an army. They called an armed band ‘the Russian army’, but it is in fact some kind of horde. I remember what my grandmother, who lived through the [Second World] War, recounted.  She said that the Germans did not behave like that.  The Romanians who were here throughout the occupation didn’t behave like that, at least not in Stara Zubrivka.

On television they showed toilets being taken away.  The same is happening with us.  They burst into buildings where people don’t live or have left and plunder them.”

His neighbours told him that on the same day that the invaders came for him a second time, they also broke into his home again, this time stealing a television and some other things.

“They’re only capable of beating up a 60-year-old granddad.  For that, they stage a whole special operation with 40 armed men.  They surround the territory, with snipers lying on the ground while others ‘denazify’ the house …”