Russian invaders demand Ukrainians have ‘filtration’ stamps and permits to live in their own citiesRussia sends relatives of Ukrainian soldiers and other Mariupol residents to ‘concentration camp’ in occupied DonbasHorrific conditions and torture in Russian filtration camp ‘ghetto’ for Mariupol residents Hospital bombed by the Russians at Azovstal as more mass graves found near Mariupol Mass grave near Mariupol could contain up to nine thousand victims of the Russian invaders Russia plans total ‘filtration’ of Mariupol men and forced ‘mobilization’Russia destroys Mariupol and tries to get illegally deported residents to move to Siberia Russia accused of using mobile crematoria to hide its war crimes in Mariupol At least 50 Ukrainians were burned to death in Russia’s bombing of Mariupol hospitals Russian FSB produce ‘refugee’ propaganda video blaming Ukrainian soldiers for Russia"s war crimes in Mariupol Russia continues bombing Mariupol while producing propaganda videos about its ‘humanitarian aid’Russia responds to International Court order to stop bombing Ukraine by destroying Mariupol Theatre sheltering familiesRussian invaders take Mariupol intensive care hospital and its patients hostage Mass graves of the Ukrainian civilians Russia claims it is not killingTerror and abductions as Russia tries to break Ukrainian resistance in Kherson and other occupied citiesUkrainian journalist Oleh Baturin feared abducted by Russian invaders in Kherson oblast Mayor of Melitopol Ivan Fedorov abducted after refusing to collaborate with the Russian invaders Russian priest arrested and prosecuted for sermon opposing Russia’s war against Ukraine Russia effectively admits it deliberately bombed the maternity hospital in Mariupol that killed three patients, including a childRussia brings grotesque propaganda to Berdiansk after Ukrainian journalists refuse to collaborate
• Topics / War crimes

Chief Russian propagandist: “All our hope is pinned on famine” 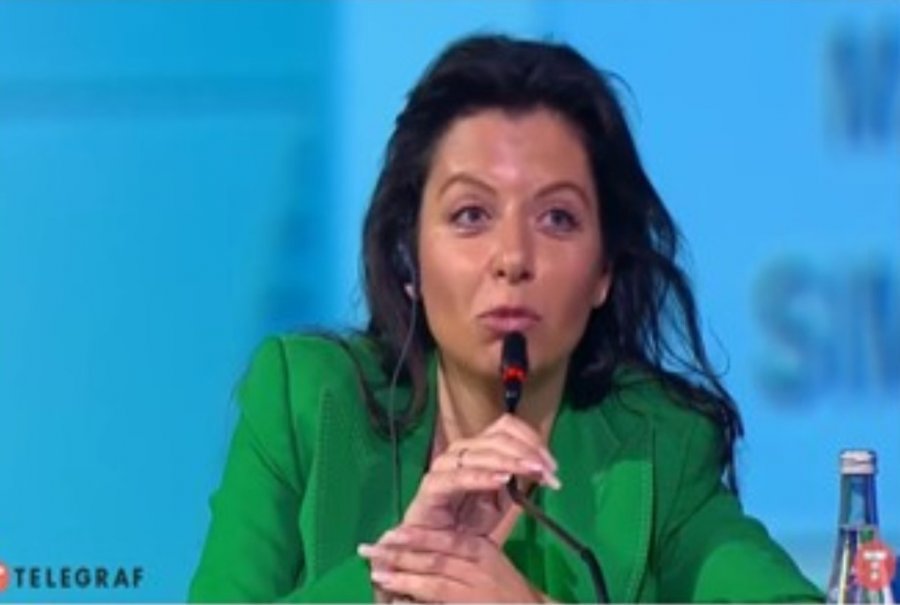 Kremlin propaganda chief Margarita Simonyan claimed to be simply relaying a ‘joke, or exclamation’ she had heard from several people when, on 17 June, that “All hope is pinned on famine”.  The director of the state propaganda channel ‘Russia Today’ was, however, speaking directly, and very publicly, to Russian leader Vladimir Putin, and it is most unlikely that she would have pointed to Russia’s use of hunger for its own ends had this not been agreed in advance.

Simonyan was, officially, addressing both Putin and Kassym-Jomart Tokayev, the President of Kazakhstan, at the so-called international St Petersburg economic forum.  She said the following: “A cynical joke or perhaps an exclamation has appeared, I’ve already heard it from several people in Moscow.  ‘All hope is pinned on famine’.  What is meant is that famine will begin and they [in the West] will come to their senses, will remove sanctions and will be friends with us because it’s impossible to not be friends.”

The effective admission that Russia is generating famine as a weapon in its war against Ukraine coincided with from David Beasley, director of the UN World Food Programme that the world was facing “frightening” shortages that could destabilise countries that depend on wheat exports from Ukraine and Russia.

Russia has been using starvation tactics as part of its war against Ukraine since soon after its full-scale invasion on 24 February. In its attempt to gain control of Mariupol, it besieged the city, preventing people from leaving and humanitarian aid from reaching those in urgent need of food, driving water and medication.

It is also directly and deliberately blocking millions of tons of wheat from leaving Ukraine, with this both further destroying Ukraine’s economy and putting many other countries in danger of serious food shortages and inevitable disturbances.

On 20 June, Josep Borrell, the EU’s High Representative for Foreign Affairs and Security Policy, Russia’s blockade of grain exports “a real war crime”.  He then, rather less clearly, added “So I cannot imagine that this will last much longer”.

Russia is committing multiple war crimes, with these likely to continue until the international community helps Ukraine stop them.

This is not the first time that Moscow has used famine as a weapon against Ukraine.  The Holodomor, or manmade famine of 1932-1933 is recognized by very many countries as an act of genocide against the Ukrainian people.

90 years ago, however, Joseph Stalin saw the need to conceal the crime, using cynical or naïve westerners, like Walter Duranty and George Bernard Shaw, to claim that there was no famine at all.  The current Russian regime continues to vehemently deny that Ukraine was deliberately targeted.

While Russia is scraping the barrel to find ‘excuses’ for its aggression, it can hardly deny targeting Ukraine.  It is, however, trying to claim that Ukraine, or even the West, are to blame for any food shortages.  Ukraine, presumably, because it does not want to be invaded and subjugated and is therefore showing opposition.  The West because it is supporting Ukraine’s legitimate wish to remain a free, sovereign nation, and because of the sanctions it has imposed against Russia.

Moscow clearly sees no need to deny the undeniable and is therefore, as Simonyan makes clear, banking on instability and fatigue, or straight blackmail over mass famine, to get painful sanctions lifted.  It was already noticeable from Borrel’s remarks on 20 June that he saw the need to emphasize that price increases and scarcity of energy and food are the fault of the war, and that EU sanctions are not influencing that crisis “as they don't target food or fertiliser.”

While Ukraine resists Russia’s attack, the latter will aim for maximum destruction, suffering and instability to weaken the country.  Moscow is, in fact, interested in maximum instability in the world, and is more than happy to achieve this by stimulating a huge increase in the number of refugees and major food shortages.  Together with mounting inflation and poverty, these increase support for the far-right (and occasionally extreme left) parties in Europe that Moscow has been cultivating for years, and which almost invariably oblige by being pro-Kremlin, anti-Ukraine and anti-EU.

In short, the greater the famine and humanitarian tragedy, the better for Moscow and lackeys like Simonyan.  Such brutal honesty should be heeded by western countries, and lead to the obvious conclusion that Ukraine must be actively helped to drive out and defeat Russia once and for all.