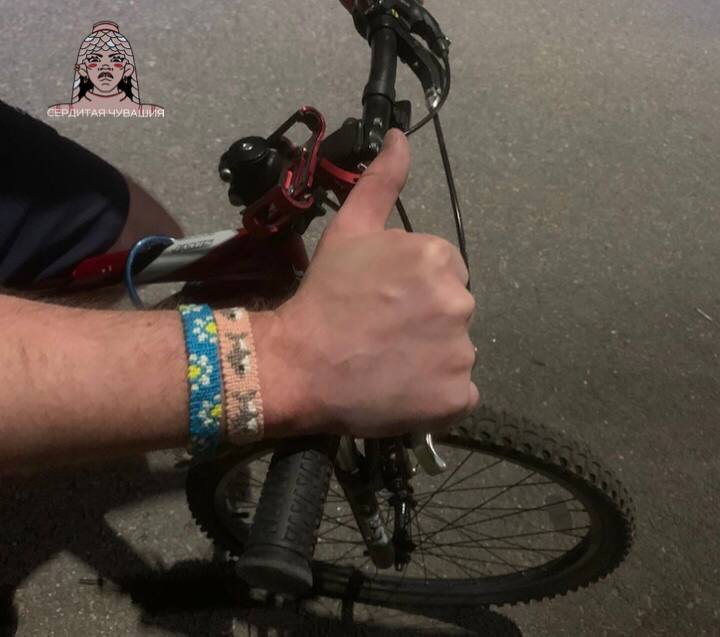 One bracelet for a 500-rouble donation; two for 1,000 roubles. Photo from the “Angry Chuvashia” Telegram channel

Advice to conscripts on refusing military service; a secret Peace Forum in Petersburg; bracelets for those who donate towards the fines for protesting: people in Russia continued to express opposition to the war and the regime responded with new punishments, criminal charges and violence. Agents beat up a man in front of his seven-year-old son because the boy was wearing a yellow hat and blue jacket.

During the past few months, a coalition of Russian rights activists has run a hotline on Telegram to help and advise conscripts – @agsnowarbot. Specialists from various organisations explained how conscripts could exercise their right not to do military service and advised them about the legal aspects of such a decision, both in anonymous personal consultations and online at t.me/peaceplea

In June 2022, the total number of subscribers to the channel exceeded 300,000. They asked how they could refuse to take part in military operations, if they could break their contract before it expired, how to stand up for their anti-war beliefs and assert the right of the individual in Russia to perform alternative civilian service.

From 16 to 18 June (inclusive) a Forum of Peaceful Russia was secretly held in St Petersburg. A key issue under discussion was how to combat imperialist attitudes and resist Russia’s present totalitarian regime.

On Pushkin Square in Moscow Ivan Romanov was arrested for singing the Ukrainian folk song, “O, the red-berried snowball tree in the meadow”. He borrowed the microphone of a street musician to do so.

Protesters were arrested across Russia for holding solitary anti-war pickets: in St Petersburg, in Central Russia (Moscow, Smolensk), in the Volga Federal District (Ufa, Samara and Nizhny Novgorod), in Krasnoyarsk (Siberia) and in the Far East (Vladivostok).

Fines for discrediting the Russian army were levied all over the country: in Central Russia (Voronezh, Vladimir and Yaroslavl), in South Russia (the Krasnodar Krai, Novorossiysk, Kalmykia, Astrakhan, and the Rostov Region), in Northwest Russia (Kotlas, St Petersburg); on the Volga (Ufa, Cheboksary, Perm, Izhevsk), in the North Caucasus (Sochi, Pyatigorsk), in Nizhnevartovsk (Urals) and in the Far East (Chukotka).

·      peeling stickers with the letter Z off automobiles,

·      ripping down posters with the letter Z in lifts,

The monitoring group OVD-Info says that 43 men and women were detained in the Moscow Metro on Russia Day (12 June) using facial-recognition technology. The detainees had been arrested previously for their involvement in anti-war protests. The police told some of those arrested that they were being targeted on Russia Day. They all spent several hours at a police station.

On 12 June, the activist and photographer Alexander Metz picketed the Oleg Tabakov theatre in Moscow. Standing beneath a vast Z on the front of the building he carried a placard that read, “Take it down! Z is a symbol of murder. It’s a disgrace and nothing to be proud of!” Metz was sentenced to 15 days detention. 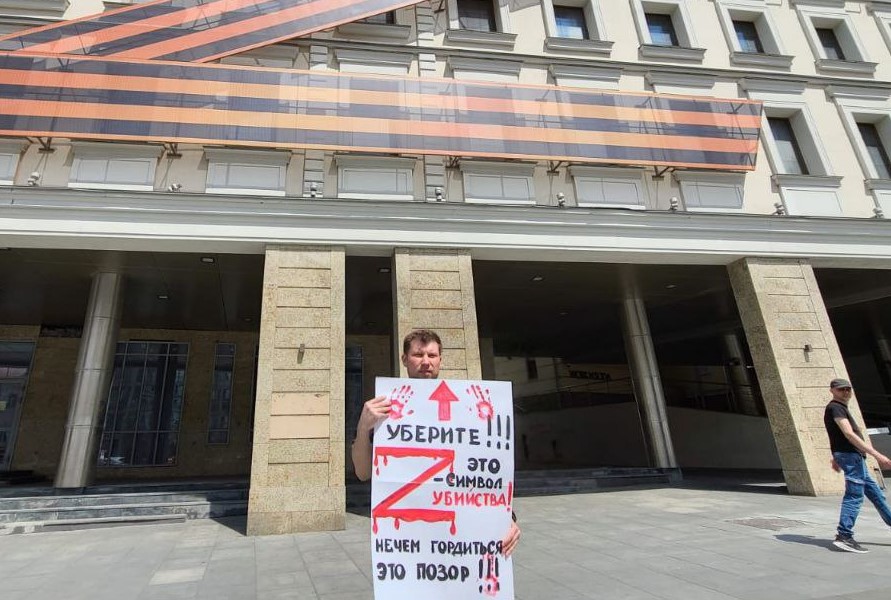 “Z is a symbol of murder and nothing to be proud of!” Photo from OVD-Info

Sergei Vlasov, a deputy in Moscow’s Pechatniki district, was charged with discrediting the Russian army under Article 20.3.3 of Russia’s Code of Administrative Offences. “I don’t yet know the details,” said Vlasov. “But I’m not the one discrediting the army, of that I’m sure, it’s those who give [soldiers] criminal orders,” Vlasov wrote on his Telegram channel.

In Penza (Volga District) law-enforcement officers brought charges against local activist Albert Gerasimov. He was responsible, they believed, for writing, “Peace to the World!We don’t need War – that’s the motto of the Friendship Squad”, in blue and yellow letters on a fence next to the road. 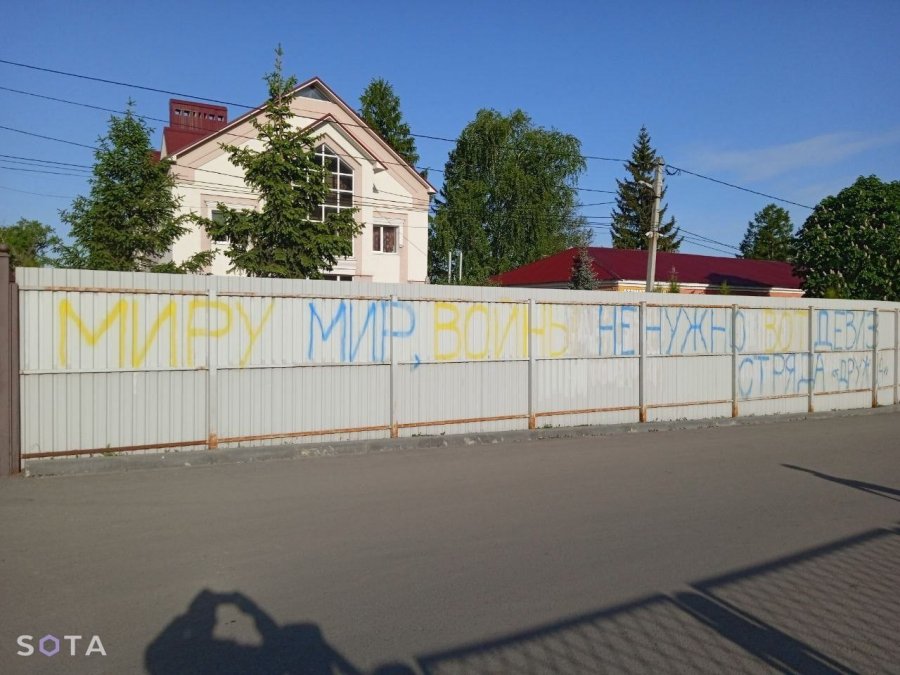 “Peace to the World! We don’t need War”. Photo from the Sota Telegram channel

In Central Russia, a court in Vladimir fined Mikhail Semenyuk 30,000 roubles. The owner of a second-hand store, Semenyuk was convicted of discrediting the Russian army because he put up an anti-war poster in his own shop.

On the night of 29 May law-enforcement officers in Moscow arrested Alexander Fyodorov and another person for carrying anti-war flyers. The protest materials were found when the young men were stopped next to the entrance to the Kursk metro station. They were taken to a police station where FSB officers and police detectives interviewed them. The two were threatened with prosecution for committing a crime. On 21 May, supposedly, they attacked someone and were lucky that their alleged victim “had escaped with his life”.

Activists in Chuvashia (Volga District) are donating woven bracelets in exchange for donations to help pay the fines of those taking part in anti-war protests. A protest was announced over the “Angry Chuvashia” Telegram channel. Julia Kaburkina wove the bracelets in blue and yellow or adorned them with other decorations. Previously she was fined for replacing price tags in a shop with small anti-war figures made of paper.

Sophia Pugachova, head of the Norvezhsky district of the Pskov Region (Northwest Russia) prohibited schoolchildren from hanging the letters Z and V on a building. They were attending summer camp and pasted the letters on the windows of the local cultural centre. They removed them the same day on Pugachova’s orders. She said that if the symbols of the “special operation” were attached to a municipal building it would also be necessary to “post an alternative view there”. In which case, she feared, hooligans might smash the windows. The 7x7 website (Horizontal Russia) described its report as “news from a parallel universe”.

Meanwhile the Pskov City Court fined local resident Alexei Perepelitsyn 30,000 roubles for “discrediting” the Russian army. Conversations about the war on the city’s Lev Tolstoy Street were the pretext for these charges.

Moscow printers Pritanika refused to print tee-shirts bearing the words, “For Victory!” [ЗаПобеду]. State Duma deputy Alexander Hinstein has already drafted a complaint about the incident to the prosecutor’s office: “[Boycotting the letter Z] must be given a legal evaluation. What has become the norm in Riga, Warsaw and Lviv is unacceptable in Moscow!” writes Hinstein, who is a member of the ruling United Russia Party.

A clip appeared online showing the attack on Roman Taganov, an activist from Maikop (Adygea, South Russia), when he was taking his seven-year-old son for a walk. The video was shot in March this year; his attackers were later identified as agents of the Centre for Combatting Extremism. Taganov was subsequently charged with assaulting a policeman (Article 318:1, RF Criminal Code) and on 17 March he was placed under house arrest. His wife Yekaterina has described in social media one version of the event: the attack was prompted, it is said, by the yellow and blue clothing of their son; Taganov himself was wearing a green ribbon, the colour of anti-war protests in Russia.

More charges were brought against Tambov musician Vladimir Fateyev under the law against discrediting the Russian army (Article 20.3.3, RF Code of Administrative Offences). Fateyev was arrested and taken to the Oktyabrsky police station in the Central Russian city. Rights activists say that police did not like the image of St. Nicholas the Wonder-worker, drawn on the musician’s page online: they linked this image, for some reason, to the Ukrainian armed forces.

In the Oryol Region (Central Russia) activist and blogger Sergei Nosov was investigated for circulating knowingly false information (fake news) about the use of the Russian armed forces (Article 207.3, part 1, RF Criminal Code). A search was conducted at his home in the village of Baklanovo. The reason for the criminal investigation was the publication on a Telegram channel of “Nosov’s List” of the murders of civilians in Bucha and Irpen.

Dmitry Shkrebets, whose conscript son Yegor died when the Moskva guided missile cruiser sank on 14 April this year, began his own Telegram channel. “The cruiser Moskva” would carry those reports, Shkrebets Sr. explained, that were being blocked on the Vkontakte social network.

A businessman from a village near St Petersburg, Dmitry Skurikhin, turned his store into a political statement, writing on the walls the names of Ukrainian towns and cities that had suffered from Russian aggression. Soon one his fellow villagers wrote the word “Traitor” on the wall. Skurikhin was not disheartened: “I took a demonstrative stand in support of Ukraine. Everything’s fine. My fellow villagers greet me, no one tells me to bugger off. I take that as an unambiguous vote of support.” 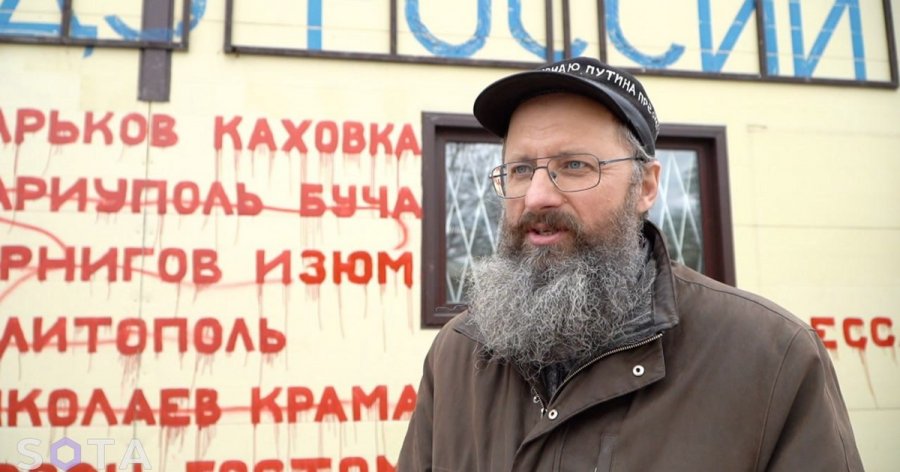 Dmitry Skurikhin outside his shop near St Petersburg. Photo from the Sota Telegram channel

CORRECTION: In the previous digest it was stated erroneously that Pinchas Goldschmidt was the Chief Rabbi of Russia. Between 1993 and 2022 he served as Chief Rabbi of Moscow (JC).

This digest was compiled by Memorial volunteers from reports by OVD-Info,  Kholod, the Vidimy protest and Activatica Telegram channels and other sources. Translation by John Crowfoot.