Chief Russian propagandist: “All our hope is pinned on famine” Russian invaders demand Ukrainians have ‘filtration’ stamps and permits to live in their own citiesRussia sends relatives of Ukrainian soldiers and other Mariupol residents to ‘concentration camp’ in occupied DonbasHorrific conditions and torture in Russian filtration camp ‘ghetto’ for Mariupol residents Hospital bombed by the Russians at Azovstal as more mass graves found near Mariupol Mass grave near Mariupol could contain up to nine thousand victims of the Russian invaders Russia plans total ‘filtration’ of Mariupol men and forced ‘mobilization’Russia destroys Mariupol and tries to get illegally deported residents to move to Siberia Russia accused of using mobile crematoria to hide its war crimes in Mariupol At least 50 Ukrainians were burned to death in Russia’s bombing of Mariupol hospitals Russian FSB produce ‘refugee’ propaganda video blaming Ukrainian soldiers for Russia"s war crimes in Mariupol Russia continues bombing Mariupol while producing propaganda videos about its ‘humanitarian aid’Russia responds to International Court order to stop bombing Ukraine by destroying Mariupol Theatre sheltering familiesRussian invaders take Mariupol intensive care hospital and its patients hostage Mass graves of the Ukrainian civilians Russia claims it is not killingTerror and abductions as Russia tries to break Ukrainian resistance in Kherson and other occupied citiesUkrainian journalist Oleh Baturin feared abducted by Russian invaders in Kherson oblast Mayor of Melitopol Ivan Fedorov abducted after refusing to collaborate with the Russian invaders Russian priest arrested and prosecuted for sermon opposing Russia’s war against Ukraine Russia effectively admits it deliberately bombed the maternity hospital in Mariupol that killed three patients, including a child
• Topics / Freedom of expression
• Topics / War crimes 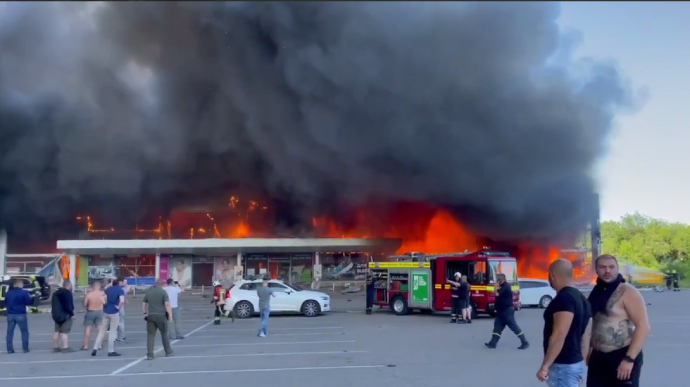 The fire that broke out after Russia bombed the Amstor Shopping Centre in Kremenchuk in the middle of the day on 27 June (screenshot from a video, posted by Ukrainska Pravda)

Terrorists do not always admit to their crimes.  Journalists, on the other hand, always report them.  As of late evening on 27 June, there is total silence from the main Russian press agencies about Russia’s bombing of a shopping centre in the Ukrainian city of Kremenchuk.  This monstrous crime against civilians was breaking news in all international media, as well as in Ukraine, yet ‘journalists’ working for RIA Novosti, TASS and other Russian ‘official’ media said nothing*.  War crimes do indeed discredit Russia and its armed forces, but that is no reason for those calling themselves journalists to allow facts to be totally concealed.

It is, of course, for each individual to decide whether they can continue working in their chosen profession if such work can get them heavily fined or, in some cases, arrested.

RUJ receives generous funding from the Russian state and returns the favour through its highly specific activities and coverage of events involving journalists.  Were a Russian-speaking Rip van Winkle, who had slept through the 22 years under Russian leader Vladimir Putin, to glance at the union’s website, he would have no idea that Russia is occupying part of Ukraine’s territory and is waging war against this neighbour and that there are very many journalists imprisoned for writing the truth both in Russia and in occupied Crimea.

He could, however, learn about the Russian Union of Journalists’ ‘fruitful’ collaboration with an illegal Russian proxy ‘republic’ on Ukrainian territory.  Not that he would understand such important details from the material on the site.  This provides a summary of what is described as “the first media forum of the Russian Union of Journalists and the Luhansk people’s republic’ under the title ‘journalism without borders’.  This event took place in occupied Luhansk, part of an illegal proxy ‘republic’ almost certainly unrecognized by the countries of all other members of IFJ-EFJ.  It involved something described as a master class in ‘anti-crisis management’, run by Russian media manager and owner Dmitry Bondarev.  The only ‘crisis’ mentioned, despite the event taking place in a country which Russia is bombing on a daily basis, is the pandemic.  Another RUJ member present, Denis Tokarsky, talks about authors’ rights to photos and correctly protecting them.

The same site quotes two ‘news reports’ from the Russian media.  One is from ‘Zvezda’, a website closely linked to Russia’s defence ministry and claims that a “Zvezda correspondent” came under shelling from Ukraine’s Armed Forces (although nobody was injured).  The other is entitled ‘Media report the threat of an attack on Skabeyeva’ and quote the media as claiming that the publication VI.ru, the FSB and others in the Volgograd oblast received anonymous messages alleging a planned attack on “television presenter Olga Skabeyeva”.  The latter, although this is, of course, not mentioned, is one of the most notorious propagandists for the current Russian regime and its war over the past 8 years against Ukraine, and is now under (at least) EU sanctions “for actively supporting or implementing, actions or policies which undermine or threaten the territorial integrity, sovereignty and independence of Ukraine, as well as stability and security in Ukraine.”

The list of items that RUJ could be reporting is huge, but presumably the union’s leaders do not see the need to show solidarity with those facing repression in Russia and occupied Crimea, or other subjects that could irritate their paymasters.

There have been at least two appeals to the IFJ to expel the Russian Union of Journalists, first in March 2022, then in a public appeal from the Ukrainian Media Movement on 19 May 2022.  The latter pointed to the  fact that RUJ is financed from the state budget of a country which, under the current “totalitarian regime”, has an appalling record, including of killing journalists.  The authors note that the IFJ Constitution clearly states that one of its goals is to maintain the function of journalism as a pillar of democracy and freedom in society.

“At a time when Russia ranks around 150th in the freedom of speech rating, we do not see an adequate response to this state of affairs from the Russian Union of Journalists, including a proper response to censorship and harassment of the remnants of genuine journalism by the Russian authorities.”

“Journalism should present different points of view, but it should not rebroadcast government propaganda and hate speech (as reflected in paragraph 3.n of the IFJ Constitution). We believe that the Russian Union of Journalists has failed this task, as it has not responded properly to the rise of Russian chauvinism and the government's indulgence in such processes.”

The Media Movement’s appeal was first published in Ukrainian, but can be read here in full in English.

RUJ remains a member of the International Federation of Journalists although its engagement in occupied Luhansk, its presentation of questionable news items and concealment of truthful information, especially about political persecution, violate international journalist standards and indicate flagrant collaboration with the Russian regime in its aggression against Ukraine.

* By very late on Monday night, the same agencies were quoting Russian politicians claiming that the images from Kremenchuk were 'fakes' ("like those from Bucha") or 'provocation'.