Collaborators with Russian state terrorism should be thrown out of International Federation of Journalists Chief Russian propagandist: “All our hope is pinned on famine” Russian invaders demand Ukrainians have ‘filtration’ stamps and permits to live in their own citiesRussia sends relatives of Ukrainian soldiers and other Mariupol residents to ‘concentration camp’ in occupied DonbasHorrific conditions and torture in Russian filtration camp ‘ghetto’ for Mariupol residents Hospital bombed by the Russians at Azovstal as more mass graves found near Mariupol Mass grave near Mariupol could contain up to nine thousand victims of the Russian invaders Russia plans total ‘filtration’ of Mariupol men and forced ‘mobilization’Russia destroys Mariupol and tries to get illegally deported residents to move to Siberia Russia accused of using mobile crematoria to hide its war crimes in Mariupol At least 50 Ukrainians were burned to death in Russia’s bombing of Mariupol hospitals Russian FSB produce ‘refugee’ propaganda video blaming Ukrainian soldiers for Russia"s war crimes in Mariupol Russia continues bombing Mariupol while producing propaganda videos about its ‘humanitarian aid’Russia responds to International Court order to stop bombing Ukraine by destroying Mariupol Theatre sheltering familiesRussian invaders take Mariupol intensive care hospital and its patients hostage Mass graves of the Ukrainian civilians Russia claims it is not killingTerror and abductions as Russia tries to break Ukrainian resistance in Kherson and other occupied citiesUkrainian journalist Oleh Baturin feared abducted by Russian invaders in Kherson oblast Mayor of Melitopol Ivan Fedorov abducted after refusing to collaborate with the Russian invaders Russian priest arrested and prosecuted for sermon opposing Russia’s war against Ukraine
• Topics / War crimes 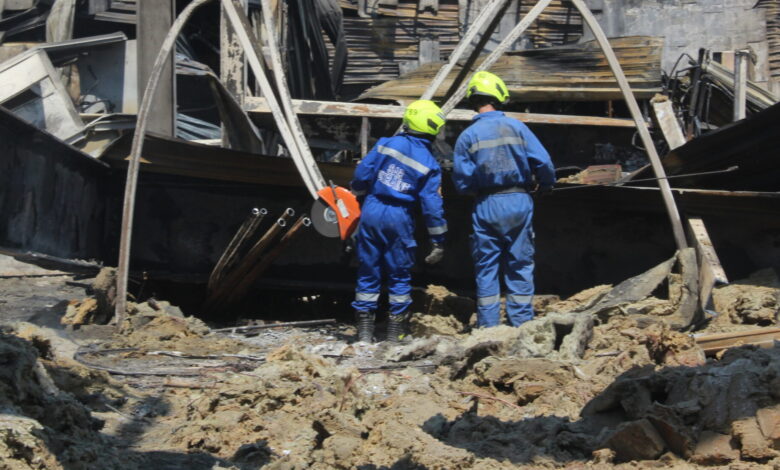 Less than a day after Russia bombed a shopping centre in Kremenchuk, killing at least 21 civilians, a top Russian official offered a swift end to the war if Ukraine capitulates, agreeing to all of Russia’s demands. Dmitry Peskov, Russian leader Vladimir Putin’s press secretary did not specify that, without such capitulation, Russia would continue committing such acts of state terrorism, but that was, after all, clear without words.

Over the first few hours after a Russian missile strike on the Amstor Shopping Centre in Kremenchuk, the Russian state media were totally silent about the attack.  They were clearly waiting for instructions as to the lies to tell, since the missile attack and horrific fire that engulfed the entire shopping centre were breaking news in all the Ukrainian and international media.

In the evening of 27 June, Life.ru  claimed that “the latest fake has appeared on the Internet” and asserted that reports, not just, as implied, from Ukrainian President Volodymyr Zelensky, but from international media, showing life footage from the scene had been ‘exposed’ by an anonymous Telegram channel called ‘war on fakes’.  The shopping centre, it is falsely claimed, was a few metres from workshops of a factory which has supposedly been supplying the Ukrainian Armed Forces since 2014.  It is further asserted, equally wrongly, that the shopping centre was not in use.

The state-controlled RIA Novosti, in turn, quoted Russia’s first deputy representative at the UN, Dmitry Polyansky, as claiming it likely that this was ‘provocation’ from Kyiv, “similar to that at Bucha”, aimed at regaining western attention prior to the NATO summit.  Polyansky has since repeated this line several times.

On 28 June, a Russian defence ministry spokesperson, Igor Konashenkov asserted that the Russian armed forces had inflicted “a high-precision air strike on hangings with weapons and ammunition from the USA and European countries”.  Repeating, like a mantra, the claim that the strike was ‘high-precision’ and that the supposed weapons were ‘of western production’, he went on to assert that the fire had been caused by detonating ammunition, and that the shopping centre was not in use.  He modestly refers to the conflagration as “a fire” and does not mention that the building was totally destroyed.

CCTV and media video footage, as well as witnesses, indicate that the above are lies, and that the first Russian missile actually hit the shopping centre just before 4 p.m. on 27 June.  A second then hit the premises of a road machinery plant on the other side of a fence.

The Media Initiative for Human Rights [MIHR] are one of the Ukrainian NGOs involved in the Ukraine 5 a.m. Coalition on Documenting War Crimes.  MIHR journalists were able to visit the site of the missile attack and confirm that there was no military target anywhere in the vicinity.  They debunk Russia’s claim that the road machinery factory was being used for weapons, and note that it had been producing machines for putting asphalt on rooms since back in Soviet times.

They spoke, among others, with 33-year-old Oleksandr, who had spent the past six years working at the Amstor Shopping Centre (in an electronics shop) and was at work that day.  Fortunately, he and colleagues had heeded the syrens and had, at least, left the building.  He was sitting, using his phone, when the missile struck and sent him hurling under a car..  He was injured, but alive,  as were his colleagues.  He explains that the main force of the missile struck a shop (‘Comfy’) around 30 metres from where he was sitting.  He knows that many of the employees of that shop were under the rubble, with the chances of them having survived remote.

One of the rescue team, Ivan Melekhovets called the claim that the shopping centre had not been functioning “absurd”, and says he did shopping there quite recently. You can, in fact, see from many of the photographs that the Russian media studiously avoid, trolleys with produce in them and other clear signs of what was left of shops selling clothes or typical supermarket goods.

The rescuers were taking turns both because of the extreme heat and because of the horror that they were having to deal with, finding the charred bodies, or even just parts of bodies, of ordinary people who had come to relax or do shopping at Amstor.

MIHR spoke also with Ivan Zhukov, a surgeon, who confirmed that his hospital had received 24 people injured from the missile attack, with seven brought to the surgery department.  One man had died of the head injuries received in the attack.

Soldiers with whom MIHR spoke believe it possible that this supposed ‘high-precision missile attack’ was, in fact, supposed to hit the road machinery plant.  The Ukrainian military have confirmed, as was initially indicated by the testimony of a resident of a building opposite Amstor, that the missile came from behind the shopping centre, which would mean it came from Russia.

As far as the road machinery factory is concerned, the authors point out that foreign journalists can view the place themselves and confirm that this was a totally civilian site.   The factory dates back to 1984.  Before the fall of the Soviet Union, it was partially engaged in repairing military equipment.  Since Ukraine’s Independence, however, it has worked in a purely civilian capacity.

The two missile strikes were the 39th and 40th that Russia has inflicted so far on Kremenchuk, an industrial city in Poltava oblast.  A huge percentage of the missile strikes on most Ukrainian cities are, like these, on civilian targets (hospitals, schools, residential buildings, etc.)

MIHR spoke with Mykola Kikkas, a lawyer from the Regional Human Rights Centre, who stressed that all such attacks on civilian infrastructure are war crimes.  He says that such acts by Russia are systemic, and can be said to be their method of waging war.