Russian proxy ‘Donetsk republic’ threatens foreign defenders of Ukraine will be executed, with families not told when 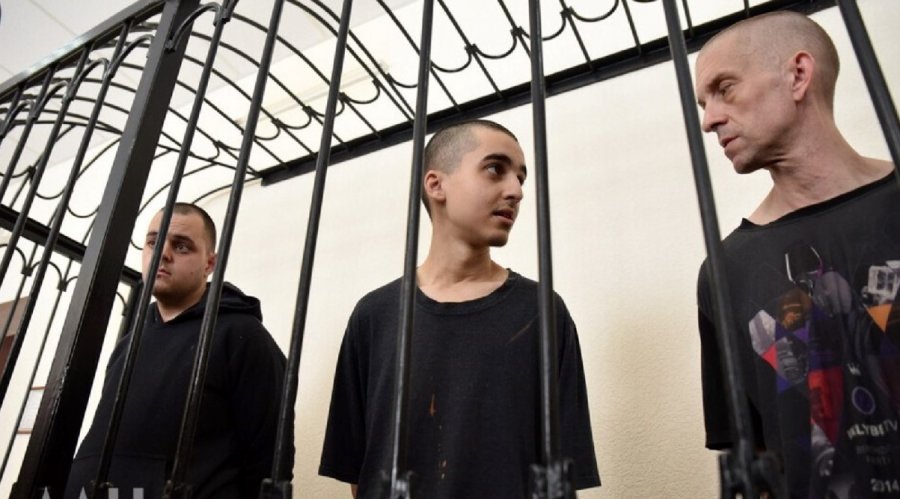 The Russian proxy ‘Donetsk people’s republic’[‘DPR’] reported on 12 July that its lifting (on 8 July) of a previously unknown moratorium on the death penalty had now come into effect. Both ‘DPR’ and the Russian state media immediately reminded readers of the recent ‘death sentences’ passed by an unrecognized ‘DPR court’ against two Britons, Shaun Pinner (48) and Aiden Aslin (28) and Moroccan Brahim Saadoun (21).  It seems likely that Russia has ordered this new move both as a means of raising the stakes in any negotiations on the men’s release, and as a threat to other foreign nationals who come to help Ukraine defend itself.  The news also coincided with claims that the pseudo ‘republics’ are planning an ‘international tribunal’ purportedly aimed at putting ‘war criminals on trial’ in Mariupol, the city bombed and besieged by Russian forces and currently under Russian occupation.  While any suggestion that this could be an international court is simply absurd, it has long been feared that Russia, via its proxy Donbas ‘republics’, will attempt show trials of Ukrainian prisoners of war.  Such stunts could well end in ‘death sentences’.

‘Former’ Russian FSB officer Igor Girkin led the Russian armed unit that seized control of Sloviansk in April 2014.  He held a top post in ‘DPR’, together with fellow Russian Alexander Borodai, in ‘DPR’ until the downing by a Russian BUK missile of Malaysian airliner MH17 on 17 July 2014 made Moscow eager to remove Russians from such prominent posts.  Both Girkin later, and his senior aide Igor Druz in August 2014, confirmed extrajudicial executions.  If Girkin claimed that the executions were over looting, Druz said that the militants had killed a number of people “to prevent chaos”.   Plenty of evidence was found in Sloviansk confirming that extrajudicial executions had taken place. In the equally Russian-controlled ‘Luhansk people’s republic’, a video was posted quite early on showing a ‘death sentence’ being passed against two men by a show of hands.

Gazeta.ru reported in 2016 that, according to its source within ‘DPR’, up to 150 so-called ‘death sentences’ had been carried out during the first months of the military conflict.

DPR first announced the introduction of the death penalty (based on the 1961 Soviet criminal code) and a military tribunal back in August 2014.  More detail was provided of the so-called ‘military courts’ in November of that year.  There was a long list of offences to be tried, including insubordination, ‘state treason’, ‘spying’ and ‘desertion’, as well as looting, robbery, etc.  On the eve of Russia’s total invasion of Ukraine, there were known to be at very least 300 Ukrainian civilians and a small number of PoWs imprisoned in the so-called ‘republics’ with a very large number ‘sentenced’ for ‘spying’ or ‘treason’, often for as little as pro-Ukrainian social media posts.

The first ‘official DPR death sentence’ was reported back in February 2016.  In its report Human Rights in the Administration of Justice in Conflict-Related Criminal Cases in Ukraine April 2014 – April 2020, the Office of the UN High Commissioner for Human Rights expressed concern, inter alia, about the use of the death penalty in ‘DPR’, but reported only two cases (that reported in February 2016, and one on 18 July 2018).  At the time of writing the report, it was not aware of any such sentence having been implemented.  Vera Yastrebova, Director of the Eastern Human Rights Group, responded to the OHCHR report by stating that they had information from reliable sources suggesting that there had been nine such ‘sentences’ by 2019. Such cases, however, were classified as ‘top secret’, with those involved in the procedure for implementing such ‘sentences’ forced to sign undertakings not to divulge any information about them.

In Freedom House’s report Freedom in the World 2021, Occupied Crimea was rated on the same level as Somalia and Saudi Arabia at 7/100, while occupied ‘Eastern Donbas’ was only one notch above North Korea at 4/100.  Among many reasons for such an appalling rating was the lack of any respect for rule of law.

There is, in short, no chance whatsoever of a person receiving a fair trial in ‘DPR’. Even the reports on 12 July from ‘DPR’ and Russian state media made this abundantly clear.  All of them repeat the lie that Brahim Saadoun; Shaun Pinner and Aiden Aslin were ‘mercenaries’.  All three had been living in Ukraine and were contract soldiers in Ukraine’s Armed Forces.   The very fact that something so easily proven is flagrantly ignored indicates the political nature of the ‘sentences’.

Russia used its fighters to create the proxy ‘republics’ and continues to finance, arm and control them. Russia has yet to revoke its own moratorium on the death sentence, although there are fears that it may, since it has now left the Council of Europe.  No decisions are taken in ‘DPR’ without directives from Moscow, and this includes both the handing down of ‘death sentences’, and their implementation.

With respect to all three of the men ‘sentenced’ to death, the European Court of Human Rights has applied Rule 39 and ordered Russia to ensure that these ‘sentences’ are not carried out.  Russian leader Vladimir Putin has, however, signed into force laws which claim that ECHR’s jurisdiction over Russian ended on 16 March 2022.  This is in contravention of a decision by the ECHR Grand Chamber, which envisages jurisdiction until 16 September.  More details here:

Denis Pushilin, the Russian-installed leader of ‘DPR’ stated on 13 July that the imprisoned foreign nationals serving in Ukraine’s Armed Forces would be executed by firing squad if their appeal failed, with the date of execution not revealed.  It cannot be overstressed that there is no such thing as an independent court in ‘DPR’ and any decision regarding the men’s appeal will effectively be taken by Moscow.