Russia produces a variation of easily disproven lies about its horrific war crime in Kremenchuk Collaborators with Russian state terrorism should be thrown out of International Federation of Journalists Chief Russian propagandist: “All our hope is pinned on famine” Russian invaders demand Ukrainians have ‘filtration’ stamps and permits to live in their own citiesRussia sends relatives of Ukrainian soldiers and other Mariupol residents to ‘concentration camp’ in occupied DonbasHorrific conditions and torture in Russian filtration camp ‘ghetto’ for Mariupol residents Hospital bombed by the Russians at Azovstal as more mass graves found near Mariupol Mass grave near Mariupol could contain up to nine thousand victims of the Russian invaders Russia plans total ‘filtration’ of Mariupol men and forced ‘mobilization’Russia destroys Mariupol and tries to get illegally deported residents to move to Siberia Russia accused of using mobile crematoria to hide its war crimes in Mariupol At least 50 Ukrainians were burned to death in Russia’s bombing of Mariupol hospitals Russian FSB produce ‘refugee’ propaganda video blaming Ukrainian soldiers for Russia"s war crimes in Mariupol Russia continues bombing Mariupol while producing propaganda videos about its ‘humanitarian aid’Russia responds to International Court order to stop bombing Ukraine by destroying Mariupol Theatre sheltering familiesRussian invaders take Mariupol intensive care hospital and its patients hostage Mass graves of the Ukrainian civilians Russia claims it is not killingTerror and abductions as Russia tries to break Ukrainian resistance in Kherson and other occupied citiesUkrainian journalist Oleh Baturin feared abducted by Russian invaders in Kherson oblast Mayor of Melitopol Ivan Fedorov abducted after refusing to collaborate with the Russian invaders
• Topics / Terrorism
• Topics / War crimes

How are Russia’s missile strikes on civilians in Vinnytsia and Chasiv Yar not terrorism? 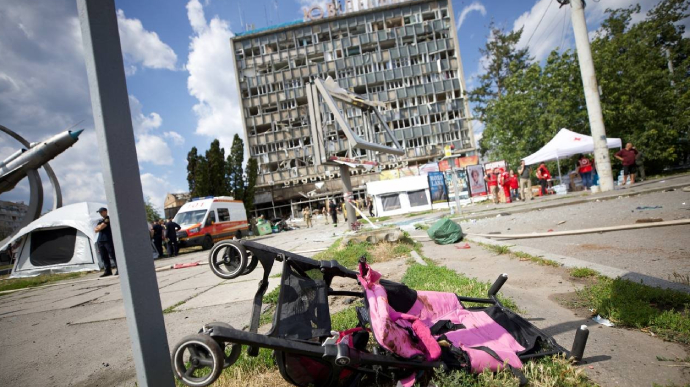 Four-year-old Lisa Dmitrieva was one of three children whom Russia killed on 14 July, in missile strikes on the centre of Vinnytsia.  The death toll at 23, but that figure is very likely to rise, as did the number of victims of another Russian attack on civilians in the city of Chasiv Yar (Donetsk oblast).  Unlike terrorist groups, Russia’s defence ministry has not rushed to admit responsibility, but it is using similar methods of terror.  Even a so-called ‘special military operation’, as Russian leader Vladimir Putin euphemistically called Russia’s full-scale invasion of Ukraine must obey the laws of war, and that means not deliberately targeting civilians. Over the past week, Russia has bombed schools, residential buildings and other civilian targets in the Donetsk, Kharkiv and Mykolaiv oblasts.  In the late morning on 14 June, they turned their firepower on children walking with their mothers and other civilians in the centre of a Ukrainian city far from Russia’s frontline. 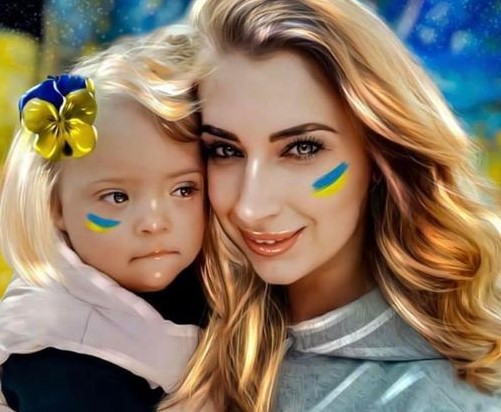 Lisa Dmitrieva who was killed outright by a Russian missile on 14 July and her mother Iryna, who was gravely injured

At least 48 civilians, including a 9-year-old boy, were killed on 9 July by a Russian missile strike on a five-storey apartment block in Chasiv Yar in the Donetsk oblast.  The devastation was massive, with a side of the building totally destroyed.  Witnesses reported three or four strikes, and a neighbouring residential block was also hit.  There, however, the damage to the building was less and no one was killed. Ukraine’s Emergency Services what may now be the final number of dead late on 13 July, stating also that nine people had been rescued.  The bombs struck in the evening when people were likely to be home.  At least until the morning of 14 July, the bombing of Chasiv Yar was the bloodiest of Russia’s attacks since the beginning of its full-scale invasion. 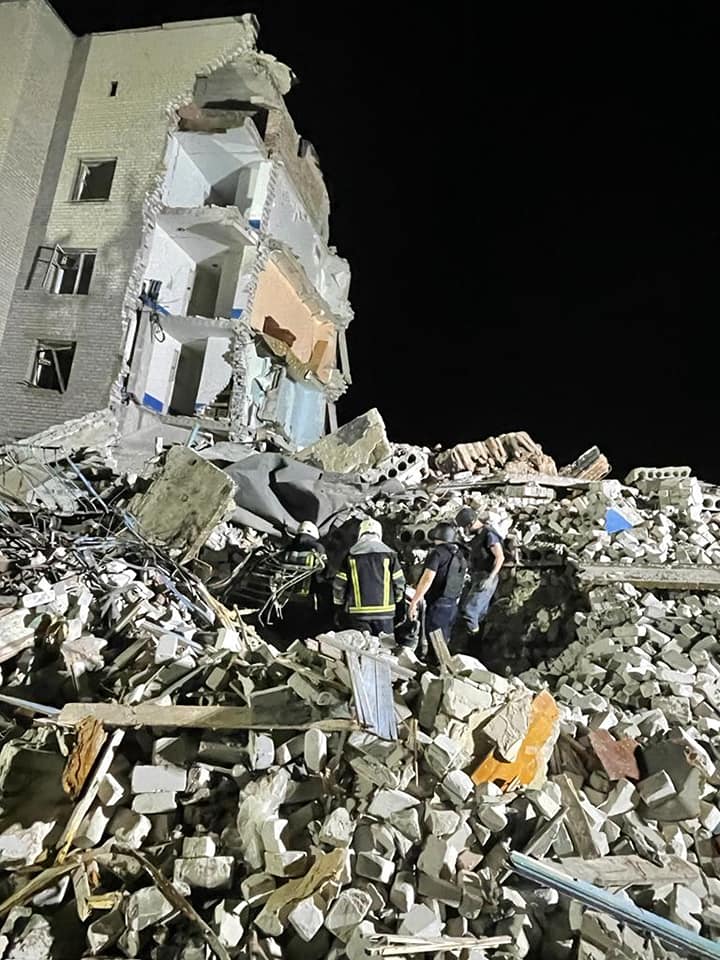 It is a war crime to target civilians, and these were very clearly residential buildings, with no military site anywhere in the vicinity.  Unfortunately, Russia’s bombing of Ukrainian civilian targets has become a daily event and is no longer ‘breaking news’ for the international media.  It was, nonetheless, still very widely reported, with video footage and photos leaving nobody in any doubt that it was an apartment block that had been hit.

Without expressions of international outrage, Russia opted for concealment, rather than its normal repertoire of denials, attempts to blame Ukraine and / or claims that the photos, and even the victims, are ‘fakes’.  Moscow did presumably understand that the media would be full of mentions of Chasiv Yar, an otherwise little-known eastern Ukrainian city, and that total silence might arouse undue attention.  Instead, on 11 July, Russian defence ministry representative Igor Konashenkov was quoted by all Russian state media that the Russian armed forces had, using ‘high-precision weapons’, destroyed a temporary base of the 118th Ukrainian Territorial Defence brigade, and had “liquidated over 300 nationalists”.  This ‘temporary base’ was alleged to have been in Chasiv Yar which the Russian defence ministry bizarrely claimed to be in the Russian-controlled ‘Donetsk people’s republic’.

Unlike the ample visual evidence (for example, and ) of Russia’s bombing of the five-storey apartment block, backed also of surviving residents and other witnesses, there is nothing at all to back this extraordinary Russian claim.  At present, Russia’s state controlled media are totally silent about the Russian carnage in Vinnytsia

The Russian defence ministry claim that any of its missiles are ‘high-precision’ is also extremely questionable.  With respect to the recent attacks on a Kremenchuk shopping centre, on an apartment block and children’s rehabilitation centre in Serhiyivka (Odesa oblast) and the daily bombing of the Kharkiv and Mykolaiv oblasts, there have been no obvious military targets anywhere nearby.  The same is evidently true of missile strikes, apparently launched from a submarine in the Black Sea. on the centre of Vinnytsia.

Less than a day after Russia bombed the shopping centre in Kremenchuk, killing 21 civilians, Putin’s press secretary Dmitry Peskov publicly  a swift end to the war if Ukraine capitulated, agreeing to all of Russia’s demands.  The implication was clear: capitulate or face more such atrocities.

It is simply impossible not to conclude that Russia is deliberately targeting residential areas, hospitals, and other civilian sites, and that its objectives are those of any terrorists, namely to instil terror in the population and to force their will on those with the power to make decisions.