Chief Russian propagandist: “All our hope is pinned on famine” Russian invaders demand Ukrainians have ‘filtration’ stamps and permits to live in their own citiesRussia sends relatives of Ukrainian soldiers and other Mariupol residents to ‘concentration camp’ in occupied DonbasHorrific conditions and torture in Russian filtration camp ‘ghetto’ for Mariupol residents Hospital bombed by the Russians at Azovstal as more mass graves found near Mariupol Mass grave near Mariupol could contain up to nine thousand victims of the Russian invaders Russia plans total ‘filtration’ of Mariupol men and forced ‘mobilization’Russia destroys Mariupol and tries to get illegally deported residents to move to Siberia Russia accused of using mobile crematoria to hide its war crimes in Mariupol At least 50 Ukrainians were burned to death in Russia’s bombing of Mariupol hospitals Russian FSB produce ‘refugee’ propaganda video blaming Ukrainian soldiers for Russia"s war crimes in Mariupol Russia continues bombing Mariupol while producing propaganda videos about its ‘humanitarian aid’Russia responds to International Court order to stop bombing Ukraine by destroying Mariupol Theatre sheltering familiesRussian invaders take Mariupol intensive care hospital and its patients hostage Mass graves of the Ukrainian civilians Russia claims it is not killingTerror and abductions as Russia tries to break Ukrainian resistance in Kherson and other occupied citiesUkrainian journalist Oleh Baturin feared abducted by Russian invaders in Kherson oblast Mayor of Melitopol Ivan Fedorov abducted after refusing to collaborate with the Russian invaders Russian priest arrested and prosecuted for sermon opposing Russia’s war against Ukraine Russia effectively admits it deliberately bombed the maternity hospital in Mariupol that killed three patients, including a child
• Topics / War crimes 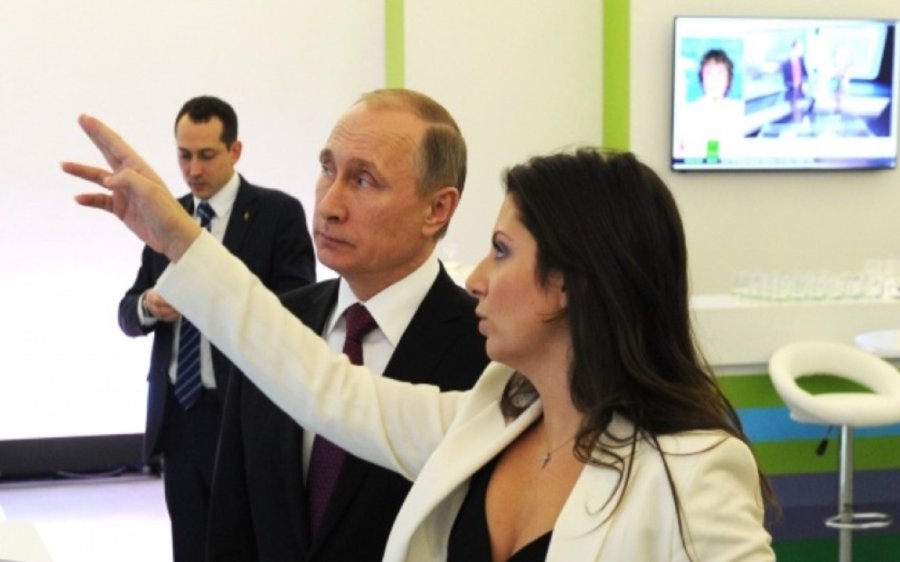 The Kremlin’s chief propaganda mouthpiece, Margarita Simonyan, has openly proposed using plundered Ukrainian harvest as a weapon, ‘sharing’ what it has stolen only with those countries that “behave properly”.  Simonyan is director of the state propaganda channel ‘Russia Today’ and was undoubtedly saying what her paymasters wanted people to hear.

Simonyan was speaking on the notorious ‘Evening with Vladimir Solovyov’ program earlier in July and was fortunately noticed and reposted by Ukrainian journalist Denis Kazansky and in full by Belsat. She states, as follows: “In the Kherson oblast, which is, as we know, agrarian, the harvest is already beginning to ripen. The entire world is worried that there will be a food crisis.  Thank God, we don’t have to worry about that, and unlike the USA and India there is no drought.  What is more, we can share with the world.  With those countries who behave properly.  We can sell it to some, we can simply help others. We have a good harvest, radishes, new potatoes, greens have ripened in the Kherson oblast, and now we have to sell them somewhere.”

With extraordinary cynicism, she concludes by claiming that this (the sale of produce) is what “their prosperity depends on, and what they live off.”.  She does not elucidate who ‘they’ are, but does go on to assert that military correspondents who have come back from trips there tell her people are pinning their hopes on selling it in [occupied] Crimea.

This mention of military correspondents is the only time that Simonyan comes anywhere near acknowledging crucial details, such as that, when she claims that “we” [i.e. Russia] have a good harvest, etc., that she is talking about Ukrainian territory which Russia invaded and is now both illegally occupying, and plundering. Given Russia’s problems in finding collaborators among the Ukrainian population in Kherson oblast, scepticism also seems warranted about the alleged sources for the military correspondents’ claims.

Simonyan is ether silent or manipulative on another issue of critical importance, namely why there is international concern in 2022 of possible famine.  The mention of drought in USA and India is particularly cynical since it is Russia which is directly causing the problem through its war against Ukraine, and blocking of the latter’s grain exports.

This is no small omission as Simonyan has already articulated Russia’s weaponization of food and famine on at least one other occasion, during an event with Russian leader Vladimir Putin and Kassym-Jomart Tokayev, the President of Kazakhstan, at the so-called international St Petersburg economic forum. On 17 June, she said the following:

“A cynical joke or perhaps an exclamation has appeared, I’ve already heard it from several people in Moscow.  ‘All hope is pinned on famine’.  What is meant is that famine will begin and they [in the West] will come to their senses, will remove sanctions and will be friends with us because it’s impossible to not be friends.”

There have been warnings from the director of the UN World Food Programme, from the EU and individual countries about the terrifying shortages that Russia’s blockade of Ukraine’s grain exports will likely lead to and the destabilizing effect that this could have on the countries affected. Germany’s foreign minister Annalena Baerbock stated clearly that, by preventing the movement of 25 million tons of grain, Russia was “using hunger as a weapon of war”.

Russia’s attempt to blame western sanctions for food shortages was dismissed at this same event by Arif Hussain, chief economist at the UN World Food Programme and has been by other experts.

It is Simonyan, however, who reflects Kremlin policy, and not expert assessments.  Moscow is very clearly betting on hunger, poverty and destabilization as means of forcing the West to give up on sanctions and “become friends with Russia.”   The same terrorist tactics were just as cynically articulated by Putin’s press secretary, Dmitry Peskov when, after Russia’s bloody attack on the Kremenchuk shopping centre, he said that such attacks would end within 24 hours if Ukraine just capitulated.

Simonyan was just as clearly articulating Kremlin policy on the Solovyov talk show in her boasting about Russia’s plunder of Ukrainian territory and Ukraine’s harvest. The calculation here is just as cynical, with Simonyan not once mentioning Ukraine, only “Kherson oblast”.  Such treatment of Ukraine as a granary, a colony to be exploited is certainly nothing new for Moscow, but the stakes now, for the world if the West lets Russia win, could not be higher.