Russian invaders demand Ukrainians have ‘filtration’ stamps and permits to live in their own citiesRussia sends relatives of Ukrainian soldiers and other Mariupol residents to ‘concentration camp’ in occupied DonbasHorrific conditions and torture in Russian filtration camp ‘ghetto’ for Mariupol residents Hospital bombed by the Russians at Azovstal as more mass graves found near Mariupol Mass grave near Mariupol could contain up to nine thousand victims of the Russian invaders Russia plans total ‘filtration’ of Mariupol men and forced ‘mobilization’Russia destroys Mariupol and tries to get illegally deported residents to move to Siberia Russia accused of using mobile crematoria to hide its war crimes in Mariupol At least 50 Ukrainians were burned to death in Russia’s bombing of Mariupol hospitals Russian FSB produce ‘refugee’ propaganda video blaming Ukrainian soldiers for Russia"s war crimes in Mariupol Russia continues bombing Mariupol while producing propaganda videos about its ‘humanitarian aid’Russia responds to International Court order to stop bombing Ukraine by destroying Mariupol Theatre sheltering familiesRussian invaders take Mariupol intensive care hospital and its patients hostage Mass graves of the Ukrainian civilians Russia claims it is not killingTerror and abductions as Russia tries to break Ukrainian resistance in Kherson and other occupied citiesUkrainian journalist Oleh Baturin feared abducted by Russian invaders in Kherson oblast Mayor of Melitopol Ivan Fedorov abducted after refusing to collaborate with the Russian invaders Russian priest arrested and prosecuted for sermon opposing Russia’s war against Ukraine Russia effectively admits it deliberately bombed the maternity hospital in Mariupol that killed three patients, including a childRussia brings grotesque propaganda to Berdiansk after Ukrainian journalists refuse to collaborate
• Topics / War crimes 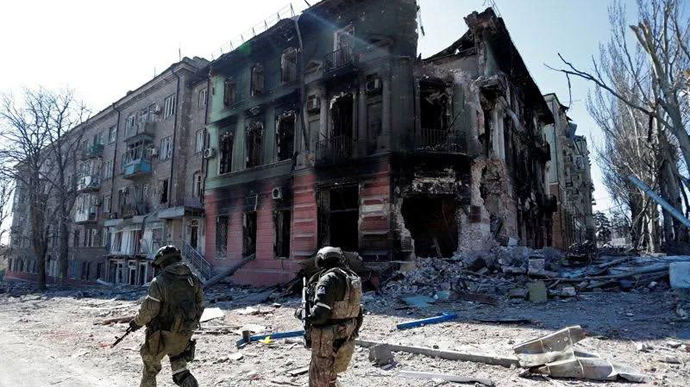 Russia’s proxy Donetsk people’s republic’ [‘DPR’] has issued a ‘resolution’ aimed at stripping Ukrainians of their property rights in occupied Mariupol.  After causing massive destruction to the city and its infrastructure, Russia, via its puppet ‘republic’, is now allocating remaining accommodation to those who collaborate with the occupation regime, and forcing others to move far from their homes.

On 19 July, Petro Andriushchenko, Adviser to the Mayor of Mariupol, published a copy of the so-called ‘DPR resolution’.  The document claims to be on recognition of the right to real estate on what is cynically called “the liberated territory’ of DPR previously under the temporary control of Ukraine”  Andriushchenko  is blunt in saying that the occupation regime has stripped all Ukrainian citizens of their property rights in Mariupol “if they have not undergone registration in the banana authorities of the banana republic”.  The document issued by this illegitimate body ‘”declares void” all legitimate documents concerning property rights issued by Ukrainian authorities since 11 May 2014 (the date of a farcical ‘referendum’ which even Russia stopped short of recognizing), or signed by a Ukrainian notary since 19 February 2022.

Andriushchenko  warns all Mariupol residents who move into other people’s apartments that “this resolution is not worth the paper it would have been printed on if the occupiers had paper.”  This is a totally unlawful document and those who move into such apartments should look after them very well, or face criminal liability according to Ukrainian legislation.

On 20 July, Andriushchenko reported that the relevant ‘DPR deputy head’ (Yevgeny Sontsev) had finally admitted that buildings currently under construction by Russia’s defence ministry will be exclusively for collaborators, those working for the occupation regime.  Others, whose homes were destroyed by the Russian invaders, will be moved, supposedly temporarily, out of Mariupol, and placed anywhere on the territory of the so-called ‘republic’ where there is at least some chance of getting heating.  Andriushchenko stresses once again that the Russian occupiers will not provide heating in the coming winter in Mariupol, and he encourages all residents who can, to evacuate now, since there is no other way of getting through the winter in civilized conditions.

In a recent press briefing, Vadym Boichenko, Mayor of Mariupol reported that Russia is holding over 10 thousand Mariupol residents in so-called ‘filtration camps’.  They know of four such camps, either in Mariupol or outside the city, with the Russians and their puppets imprisoning and torturing public officials and municipal workers.   They have also learned that one mayor of a town close to Mariupol died in prison from the torture inflicted. Boichenko does not name the person who was, apparently, ‘sentenced’ by a so-called ‘DPR court’, but says there are many such cases.  The occupation regime is trying to force people to collaborate with ‘DPR’ / Russia, with people refusing to do so.

As Ukrainian journalist Denis Kazansky recently reported, Russia and its puppets in ‘DPR’ first began talking about ‘filtration camps’ back in 2014.  Then, however, they claimed that this was what Ukraine was planning for Russian-speakers.

It has been clear since April that Russia is using what are, effectively, concentration camps to imprison large numbers of Ukrainians from all areas that fall under its occupation.  There are known to be such ‘filtration camps’, where people are imprisoned, in numerous sites on occupied ‘DPR territory’ (Bezimenne; Dokuchaevsk; Kozatske; Manhush; Novoazovsk; Olenivka; Starobeshevo and Volnovakha.  It is also likely that some Ukrainians are being taken to the notorious Izolyatsia secret prison in occupied Donetsk.