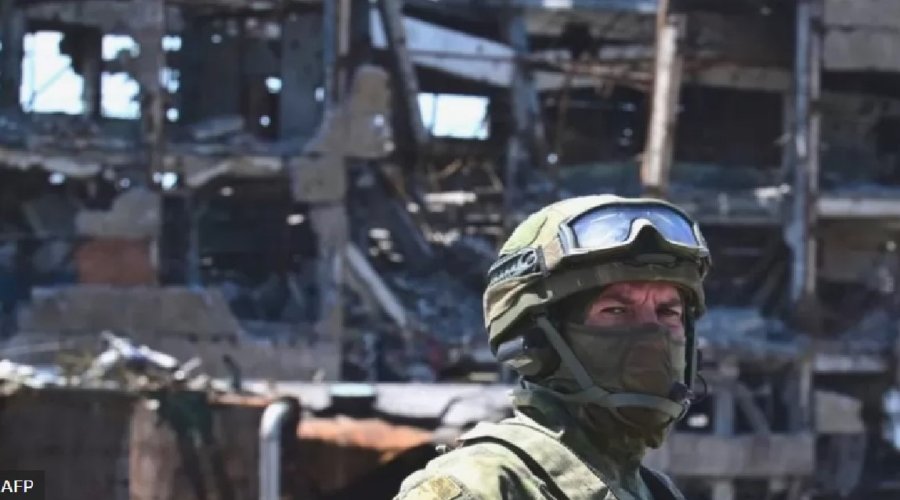 Russia has, reportedly, been attempting to recruit prisoners for its war against Ukraine since 24 February.  It is now using the notorious ‘Wagner’ private military company to go around prison colonies and recruit prisoners, including those convicted of murder or other violent crimes, to kill Ukrainians for Russia.  The men are promised vastly more money than they could ever hope to earn at home and their freedom, should they return alive, and a payment of five million roubles to their families, if they are killed. Investigative journalists and human rights activists know of around 200 men who have agreed, though the figure could be higher.

Russia is using forced ‘mobilization’, without any medical examinations, in its proxy Donbas ‘republics’, with men sent to the frontline without any proper training.  At home, Russian leader Vladimir Putin has called the total invasion of Ukraine “a special military operation” and knows that mobilization would be extremely unpopular. For the moment, therefore, Russia is using legislative means, making it possible for school leavers to become contract soldiers without doing compulsory military service; is trying to entice people into the Russian armed forces, and is simply offering good money for going to Ukraine to kill Ukrainians.  It is officially illegal in Russia to be a mercenary, but you can find any number of advertisements, like this, offering one-off payments and large wages for ‘contracts’ of six months or longer.

In a Radio Svoboda interview, Olga Romanova from the civic initiative for political prisoners ‘Rus’ sidyashchaya’ [‘Rus behind bars’] explained that there had been attempts to recruit convicted prisoners for the Ukrainian front from the very beginning (of Russia’s total invasion).  At first, however, they tried, unsuccessfully, to interest imprisoned former enforcement officers, Rosgvardia, etc, i.e. people experienced in handling weapons, as well as former prosecutors, judges, etc.

Romanova notes that her organization then saw prisoners who should not have had any chance of parole due to the length of their sentences. “These were ethnic Chechens who ended up in a Chechen battalion. How they came to be there, one can only make certain guesses.”

The third wave, Romanova says, is that involving the Wagner ‘private military company’ [pmc].  They turn up in prison colonies, offering ‘a place of employment’ to people who are eligible to ask for parole, but who cannot hope for this without a job.  They are also offered a substantial amount of money by their standards (240 thousand roubles a month).

When asked, she says that the only prisoners who are not considered are those serving sentences for rape or paedophilia.  In fact, according to the investigative journalists from ‘Important Stories’, the list is slightly longer.  You won’t be accepted if you are Ukrainian, or if you have been convicted of so-called ‘treason’, or drug offences, but no problem at all if you committed murder, manslaughter or other crimes of violence.

Without Russia officially declaring war against Ukraine, all such arrangements are illegal, but since they are clearly condoned at the highest level, this is unlikely to cause a problem.  All of this has, in any case, been seen before, with Russia having sent either soldiers or mercenaries to Donbas, without any papers, and certainly with no contract.

‘Important Stories’ first published details about the Wagner pmc campaign back on 4 July 2022, with more information provided on 20 July.  While there is no confirmation from officials, the information has been provided by many sources, and closely corresponds to that published in other reports on Telegram channels and the few media that Russia has been unable to close or censor.

The first reports were from the relatives of men held in two St. Petersburg prison colonies (No. 7 Yablonevo, and No. 6 Obukhovo).  In Yablonevo, the individuals who turned up from the Wagner pmc called on the prisoners “to defend the Motherland”, called this being “a volunteer” and offered 200 thousand roubles for six months and freedom, or 5 million for their families, if they were killed.  There were conspiratorial features to all of this, which the prisoners themselves must have understood.  They were told that everything would be organized as if they were going on etap, the often long and gruelling journey to another prison, and would be taken up to the border with Ukraine like ordinary prisoners.

Although the prisoners are told that the chances of being killed are high, many are tempted by the money and the promise of having their conviction forgotten.  The later reports confirm what Romanova said, namely that the offer is also of 200 thousand a month, a significant amount for most of the prisoners.

More details about recruitment to Wagner pmc were gathered by ‘Important Stories’, in cooperation with ‘Rus’ sidyashchaya, and published on 20 July.  One of the young men was able to ring home, but could not say anything, except that he was ringing from the Rostov oblast (which borders on occupied Donbas).  After that, he disappeared.  His aunt tried to send him a letter, and was told he had left that prison colony, but not where he was now.

The journalists have also learned, either from prisoners or their relatives, that the members of the Wagner pmc turn up together with officials from Russia’s FSB [security service] and Penal Administration.  They know of such visits to eight prison colonies, with around 200 men having been ‘recruited’.

While the Wagner ‘recruiters’ are looking, in the first instance, for people with experience of work in the army or of participation in military action, “those serving sentences for murder get priority in the selection process.”  A prisoner, recently released, told them that, as well as former service, the recruiters were looking “for those who have nothing to lose – they have no relatives, or are serving a long sentence”.

Those initially selected then face a lie detector.  Typically, the questions pertain to whether they would make a run for it in Ukraine if the opportunity arose, and their attitude to the current Russian regime.

‘Important Stories’ notes that the men themselves are offered an ‘amnesty’, although this would probably have to be in the form of a presidential pardon.  Any prisoner is entitled to ask for such a pardon, but asking is, the authors write, normally useless.  Here, however, the Wagner recruiters promise that Yevgeny Prigozhin would himself take the application to Putin.  Prigozhin earlier served time in prison for violent crimes, before becoming known as Putin’s chef and making millions.  He clearly owes this wealth to his links with Putin, and has been repaying his debt ‘of gratitude’ since at least 2014 through his financing of the Wagner pmc and the St Petersburg ‘troll factory’.  He has been under western sanctions for some time.

It was clear back in 2014-15 that the Wagner pmc was working in close cooperation with Russian defence ministry, and the same is evidently true now.  The recruiters are accompanied by the FSB and Penal Administration, and the manner in which men, serving prison sentences, suddenly disappear, seemingly to re-emerge on the frontline in Ukraine, could not happen without official approval.

Shortly after the first article, Gulagu.net reported that the Penal Administration had become alarmed at media reports about such ‘recruiting’ and that there had been orders to at least temporarily suspend it.  Any suspension does not appear to have lasted very long, but the publicity may have been instrumental in prompting other moves, including a legislative initiative on making it easier for some prisoners serving quite long sentences to get moved to low-security prison ‘settlements’.  The bill, introduced on 7 July and rushed through its first reading a mere eight days later, would make it possible to transfer prisoners, sentenced to harsh-regime prison colonies, to low-security settlements after only half the sentence. It would certainly not apply to Russia’s huge number of political prisoners, including well over 120 Crimean Tatars and other Ukrainians, but would to those convicted of murder, violent crimes, including domestic abuse.

Verstka Media have spoken with Olga Romanova and other human rights activists who see the bill as aimed both at making it easier to recruit prisoners into the army and at freeing up prisons in Russia and occupied Crimea for ‘prisoners of war’ (and, probably, the ever-increasing number of civilian hostages from Ukraine whom Russia has illegally abducted).

Romanova noted that human rights groups have been asking themselves how the recruitment of prisoners to fight in Ukraine will be officially formalized.  They had assumed that there would be a huge increase in prisoners released on parole, but this has not happened, and would, in any case, attract inconvenient questions.  The point about the low security prison settlement is that inmates don’t have to wear prison clothes; can have their own money; go out to shops or a clinic and, most importantly, can be officially employed outside the settlement.  That could include the Wagner pmc, Romanova says, with going to fight  in Ukraine being ‘a business trip’.  Irina Biryukova, from the Public Verdict Foundation, points out that it is also easier, from such prison settlements to get a release on parole.  From the public’s point of view, that will not look as strange as when apparently danger prisoners are suddenly released early.

The bill may also be about making space for Ukrainian prisoners.  Romanova says that according to her organization’s information, half the prison colonies in the Rostov oblast were cleared of Russian or Crimean prisoners in February.  Around that time, Nikolai Polozov, a lawyer representing many Crimean Tatar political prisoners, reported that parts of the SIZO, or remand prison, in occupied Crimea were being cleared of prisoners, obviously so that they could accommodate newly seized POWs or hostages.