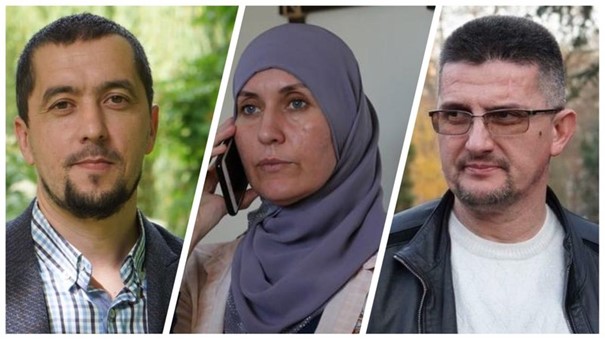 Three prominent Crimean Tatar human rights lawyers have been stripped of their licences in the latest attack by the Russian regime on independent lawyers defending victims of persecution in occupied Crimea.  Lilia Hemedzhy, her husband Rustem Kyamilev and Nazim Sheikhmambetov were either not informed at all of the imminent decision, or told at the last minute. All will appeal, but this is clearly part of a major campaign to silence lawyers who both defend political prisoners and ensure that the world knows about such persecution, in which Crimean Tatars are particularly targeted.

The three lawyers had all been forced to obtain their licence from the Chamber of Lawyers in Chechnya, with Hemedzhy positively obstructed when she sought to obtain it in Crimea. Subsequent attempts to transfer to the Crimean Chamber of Lawyers were thwarted on highly unconvincing grounds.  It seems clear that the real reason was that the Chechen Chamber is more malleable, and provided the ruling demanded by the Chechen ministry of justice.  In January 2019, Russia’s justice ministry tried to get well-known lawyer Emil Kurbedinov stripped of his licence, with the move opposed by the Crimean Chamber of Lawyers.

The loss of licence will have immediate and grave impact for the lawyers’ clients as the three are now unable to take part in criminal proceedings or represent clients in court.  Nazim Sheikhmambetov points out also that they can only retake the relevant exam to reinstate their licence in a year.  He was not informed at all of the relevant session, while Hemedzhy learned of it only the day before.  They were thus prevented from defending themselves against a totally unwarranted attack.

This is an unprecedented move and one that Sheikhmambetov is undoubtedly right in linking with political persecution from the enforcement bodies. Sheikhmambetov is one of three lawyers, together with Emine Avamileva and Aider Azamatov, who were detained in May for carrying out their professional duties.  The two men were jailed for eight days; Avamileva for five.

Russia’s persecution was first directed against Emil Kurbedinov, one of the first lawyers in occupied Crimea to both defend victims of persecution and to publicize the cases.  Back in 2016, he spoke of how it was the publicity that enforcement officers most hated and that made him ‘enemy No. 1’. That classification may well now apply equally to all the courageous lawyers who have since come forward to defend political prisoners.  Russia has fabricated criminal charges and imprisoned both civic activists and journalists in occupied Crimea.  They have thus far stopped short of concocting such ‘trials’ of lawyers, and resort to administrative prosecutions or removal of licence instead.

Kurbedinov was first detained on 26 January 2017 while travelling to the home of a Crimean Tatar activist, now political prisoner, facing an armed search.  The pretext then was a video reposted in June 2013, before Russia’s invasion and annexation of Crimea, on Kurbedinov’s VKontakte page of a Hizb ut-Tahrir meeting in Simferopol.  This was used as an excuse for armed and masked spetsnaz officers to turn up at Kurbedinov’s home and carry out a ‘search’, and for ‘judge’ Tatyana Belnichuk from the Zheleznodorozhny District Court In Simferopol to jail him for ten days.

This was the first of many occasions that Ruslan Shambazov, a traitor now heading Russia’s so-called Centre for countering extremism, has targeted lawyers.

Worth noting that three months later, the NGO Front Line Defenders named Kurbedinov Laureate of its 2017 Award for Human Rights Defenders at Risk.

Kurbedinov was detained again on 6 December 2018 and sentenced to five days’ imprisonment over the same video from June 2013.  The only difference was that this time the video had been reposted on Facebook, not VKontakte.  In January 2017, Shambazov had proposed including the identical post on Facebook to the material.  The ‘judge’ back then refused, claiming that it constituted a ‘separate incident’.

Those two ‘incidents’ over a harmless video posted before Russia’s invasion and annexation of Crimea, were used as excuse for the Russian justice ministry’s attempt to get Kurbedinov struck off.  Fortunately, the Crimean Chamber of Lawyers refused to oblige.

There have been numerous other forms of harassment against lawyers since then, including absurd disciplinary measures against Lilia Hemedzhy.  The situation, however, particularly escalated in October – November 2021 with the detention of human rights lawyer Edem Semedlyyaev.  After learning of the mass detentions, including of several civic journalists, on 25 October, Semedlyaev arrived at the station and set about providing the detained men with legal assistance.  He was initially detained himself for rightly objecting and trying to record Shambazov’s behaviour in refusing to wait for a lawyer to be present.  Shambazov claimed that this constituted ‘disobeying the legitimate demands of an enforcement officer’ and detained the lawyer.

Shambazov then demanded that Semedlyaev strip naked, which the latter clearly refused to do.  This was then the subject of another administrative prosecution, also for ‘disobedience’.  On 11 November 2021, he was fined four thousand roubles by ‘judge’ Sergei Demenok for refusing to comply with such a manifestly unlawful demand. That same day,  ‘judge’ Aleksandr Voronoy jailed him for 12 days, essentially for having properly represented his clients and objected to their right to defence being infringed.

Edem Semedlyaev was detained again by Shambazov early on 26 May and charged under a new Russian law passed immediately after Russia began its full-scale invasion of Ukraine.  This punishes for so-called ‘public actions aimed at discrediting the use of the Russian Federation’s armed forces’.  The situation was especially shocking, as Semedlyaev had merely been ‘tagged’ in a post on Facebook, and had deleted the tagged post immediately.  All of this was ignored, and he received a steep 75 thousand rouble fine.  Nazim Sheikhmambetov arrived to represent Semedlyaev and was himself detained.  Then on 27 May, Aider Azamatov and Emine Avamileva were detained after they came to represent Nazim Sheikhambetov who had been held for over 24 hours in custody.  As mentioned, all were imprisoned.

This attack on lawyers is particularly disturbing given the mounting number of political prisoners in occupied Crimea, including many whom Russia has abducted from recently seized parts of the Kherson and Zaporizhzhia oblasts