Update   A ‘court’ in Russian-occupied Crimea has jailed Crimean Tatar lawyer Nazim Sheikhambetov for eight days on evidently fabricated charges. Sheikhambetov was detained on 26 May while waiting to represent his colleague, Edem Semedlyaev who had been detained for somebody else’s anti-war post on Facebook. Sheikhambetov has said that this entire story has nothing to do with the law. “I was carrying out my professional duty, not organizing any mass meetings.  There is a clear political subtext here, and pressure on lawyers.”

For two days now,  Russia’s so-called ‘Centre for countering extremism’ has openly targeted Crimean Tatar lawyers in occupied Crimea.  On 27 May, Aider Azamatov and Emine Avamileva were detained after they arrived at the Russian-controlled Central District ‘Court’ in Simferopol to represent Nazim Sheikhambetov who had been held for over 24 hours in custody.  Sheikhambetov was, in turn, detained as he was waiting to represent a fourth lawyer, Edem Semedlyaev.

All of these lawyers are well-known for their tireless work in representing Russia’s ever-mounting number of Crimean Tatar and other Ukrainian political prisoners.  Russia has been systematically targeting journalists and civic activists, and now it would appear to be attacking lawyers. 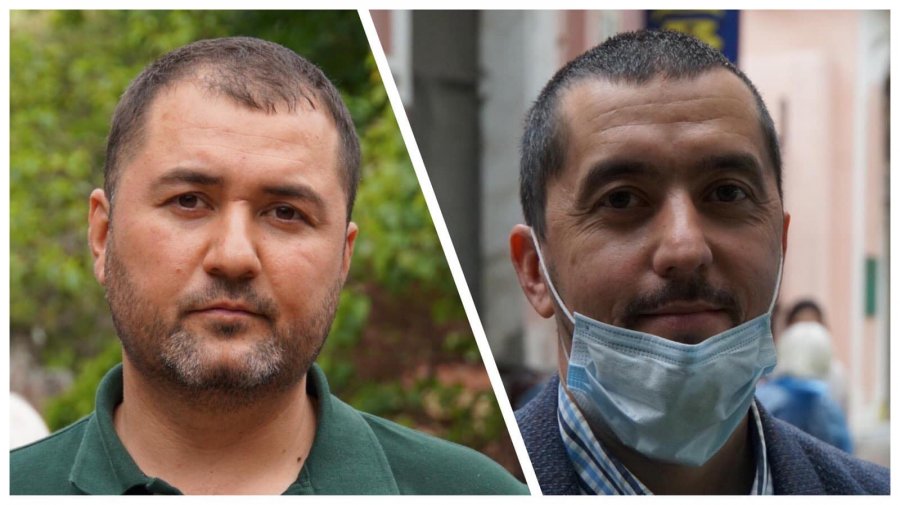 Edem Semedlyaev was detained early on 26 May by the notorious head of Russia’s so-called ‘Centre for countering extremism’, Ruslan Shambazov. He was charged under a new Russian law passed immediately after Russia began its full-scale invasion of Ukraine.  This punishes for ‘public actions aimed at discrediting the use of the Russian Federation’s armed forces, accompanied by calls to carry out unauthorized public events’ (Article 20.3.3 § 2 of Russia’s code of administrative offences).

This new ‘administrative offence’ is being used very widely as a weapon for preventing the publication of any material opposing Russia’s aggression and / or providing truthful information about it.  The situation this time is especially shocking as the material in question had nothing at all to do with Semedlyaev.  It was posted on Facebook by former political prisoner Rafis Kashapov or his brother Nafis, with Semedlyaev merely ‘tagged’.  Rafis Kashapov was himself imprisoned for four years in Russia for Facebook posts opposing Russia’s invasion and annexation of Crimea, but is now a refugee, and clearly did not understand that such ‘tags’ could be used as a pretext for prosecution in occupied Crimea.  Semedlyaev has stressed that he himself immediately deleted this ‘tagged’ post, and changed his Facebook settings to avoid other people’s posts appearing on his Facebook page.

This was ignored by the Russian occupation ‘Kievsky District Court’ in Simferopol which found Semedlyaev ‘guilty’ as charged and fined him 75 thousand roubles (around one thousand euros). Semedlyaev will be appealing against the ruling.

If Semedlyaev’s detention on such absurd charges was already appalling, what came next was even more shocking.  Several lawyers arrived at the ‘Centre’ to represent their colleague, including Nazim Sheikhmambetov (or Sheikhmambet).  He was suddenly detained by officers from the Centre, put in a car and taken away, without any explanation or charge laid.

He was later charged with infringing sanitary norms under Article 20.2.2 § 1 of the same administrative code.  This punishes for the entirely untranslatable ‘offence’ of ‘organizing the mass, simultaneous presence and/or movement of citizens in public places, causing infringement of public order’.  A. Koren, the Centre official who drew up the protocol, claims that Sheikhmambetov “infringed social distancing, with this creating the threat of the spread of the coronavirus infection’.  Even had this been the case, and Sheikhambetov is adamant that he observed social distancing, his detention for over 24 hours, until the ‘court’ hearing on 27 May is evidently disproportionate.

This is the second such evident offensive against Crimean Tatar lawyers in just over six months, and coincides with a general escalation in terror methods in occupied Crimea.

On 25 October, Semedlyaev was detained, also by Ruslan Shambazov, while representing Crimean Tatars, including two Crimean Solidarity journalists, who had been unwarrantedly detained.  Shambazov had refused to wait until Semedlyaev had finished representing one detainee, and said that they would draw up another person’s administrative protocol without a lawyer being present.

Semedlyaev immediately pointed out that this was illegal, and, when ignored, added that he would be videoing what was a clear infringement of the detainee’s rights.  Shambazov told him that videoing was not permitted, and the lawyer replied that he would, in that case, make an audio recording.  This is legal, however Shambazov claimed that the lawyer was ‘disobeying the legitimate order of an enforcement officer’ (Article 19.3 of Russia’s Code of administrative offences) and detained Semedlyaev.

Shambazov is a turncoat who betrayed his oath of allegiance to Ukraine, and now likes to revel in his Russian-given ‘authority’.  This he did by demanding that Semedlyaev strip naked.  Semedlyaev obviously refused to do so, both because it is against his Muslim faith, and because he was there in his capacity as a lawyer and had been detained while he was providing legal assistance.  He did agree to empty out his pockets and to allow a visual inspection.  Shambazov chose to view this as ‘disobeying the legitimate demands of an officer’, with this a second administrative prosecution under Article 19.3.

Semedlyaev was held in custody for almost 24 hours, together with 21 other Crimean Tatars who were either at the ‘court’ as journalists, or to show support for the three recognized political prisoners Rustem Emiruseinov, Arsen Abkhairov and Eskender Abdulganiev

On 11 November 2021, two ‘judges’ from the same Kievsky District ‘Court’ found Semedlyaev ‘guilty’.  He was imprisoned for 12 days by ‘judge’ Aleksandr Voronoy for justifiably and legally recording the violation of a detainee’s rights and fined four thousand roubles by ‘judge’ Sergei Demenok over his refusal to strip naked.