Russian invaders strip Ukrainians of their property rights in occupied Mariupol Russian invaders demand Ukrainians have ‘filtration’ stamps and permits to live in their own citiesRussia sends relatives of Ukrainian soldiers and other Mariupol residents to ‘concentration camp’ in occupied DonbasHorrific conditions and torture in Russian filtration camp ‘ghetto’ for Mariupol residents Hospital bombed by the Russians at Azovstal as more mass graves found near Mariupol Mass grave near Mariupol could contain up to nine thousand victims of the Russian invaders Russia plans total ‘filtration’ of Mariupol men and forced ‘mobilization’Russia destroys Mariupol and tries to get illegally deported residents to move to Siberia Russia accused of using mobile crematoria to hide its war crimes in Mariupol At least 50 Ukrainians were burned to death in Russia’s bombing of Mariupol hospitals Russian FSB produce ‘refugee’ propaganda video blaming Ukrainian soldiers for Russia"s war crimes in Mariupol Russia continues bombing Mariupol while producing propaganda videos about its ‘humanitarian aid’Russia responds to International Court order to stop bombing Ukraine by destroying Mariupol Theatre sheltering familiesRussian invaders take Mariupol intensive care hospital and its patients hostage Mass graves of the Ukrainian civilians Russia claims it is not killingTerror and abductions as Russia tries to break Ukrainian resistance in Kherson and other occupied citiesUkrainian journalist Oleh Baturin feared abducted by Russian invaders in Kherson oblast Mayor of Melitopol Ivan Fedorov abducted after refusing to collaborate with the Russian invaders Russian priest arrested and prosecuted for sermon opposing Russia’s war against Ukraine Russia effectively admits it deliberately bombed the maternity hospital in Mariupol that killed three patients, including a child
• Topics / War crimes

Russia killed Inna’s husband, destroyed her home and give awards to the killers for ‘liberating’ Mariupol 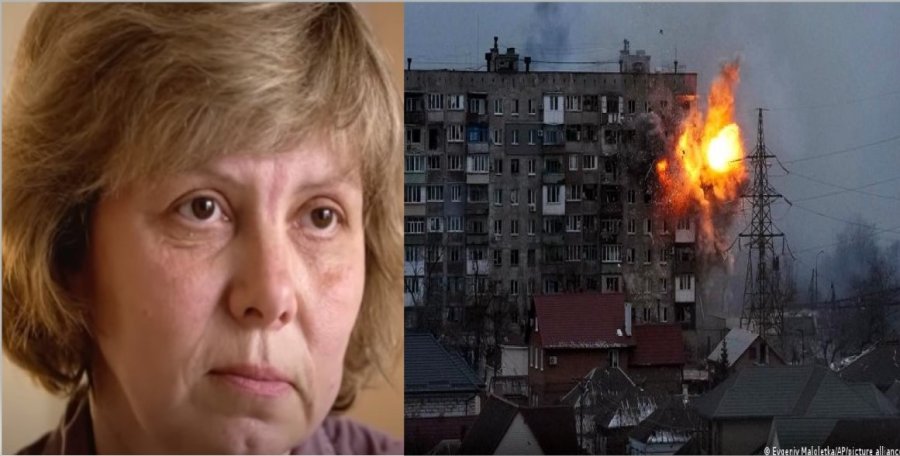 Many of the Russian soldiers who took part in destroying Mariupol and killing its residents received medals entitled ‘for the liberation of Mariupol’.  According to the Telegram channel ‘Mozhno obiasnit’, the medals are identical to those awarded to Soviet soldiers who took part in liberating European cities from the Nazis.  While very many countries in eastern Europe would strongly dispute any suggestion that the Soviet Union’s subsequent actions constituted liberation, the Soviet soldiers did, at least, defeat a clear enemy.  In the case of Mariupol and other Ukrainian cities, the population were living peacefully in their own city until their lives were shattered – or ended – by the Russian aggressor state.

This was expressed very powerfully by Inna Hladka, now a refugee forced to flee Mariupol after the Russians killed her husband and destroyed their home.  In an interview to Russian journalist Katerina Gordeeva, she explained how a ‘Kadyrov tank’ (controlled by the fighters linked with the Kremlin-installed leader of Chechnya, Ramzan Kadyrov) was positioned between their apartment block and another, with the shelling evidently from them.  “Shelling or no shelling”, she says, the dog, Tyson, needed to be taken out.  They had just left the apartment block when a missile struck it, right where their flat was.  The shelling continued for about 15 minutes, and then she ran back, looking for her husband, but the building was all in flames, and she didn’t find him.

Gordeeva asks if this was a residential building, and whether there was anything around that could class as a military target.  Hladka states emphatically that this was an apartment block in a quiet residential areas, with people’s homes, schools, a recreation centre, etc.  “What military targets?!”   Asked if [those who shelled them] saw that it was residential, she says of course, and stresses that the Russians were driving around in their tanks and could even see the residents cooking out in the courtyard (there was no electricity or running water from soon after Russian began pounding the city).

Inna also confirms that, at least in her case, she had no choice but to go in the direction of Russia (initially via occupied Donbas), and that they were subjected to so-called ‘filtration’.   She had never wanted to go to Russia and is quite categorical that they wanted to live in Ukraine. At one point she tells Gordeeva that people in the Russian proxy ‘Donetsk people’s republic’ “quietly hated us because we lived peacefully, and our city was developing and there was beauty”.

Like other witnesses, Inna also confirms attempts by the Russians to get propaganda videos out of the Mariupol residents whose lives they had destroyed. They wanted accounts about supposed ‘crimes by the Ukrainian Armed Forces’ and asked how she views the so-called ‘special operation’ [Russia’s euphemistic term for its total invasion].  Just remembering that question, she lets fly.

“How can I view the special operation when they burned down my home, and my husband was killed?  What a stupid question!  Oh yes, I’m glad, thank you, liberators!!   Excuse me, what exactly did you liberate me from?  From my husband; from my family; from our home; from everything.  And now I’m a free person”, she ended bitterly.

The Kadyrov fighters who destroyed Inna’s home and killed her husband may well have been among the recipients of medals for the so-called ‘liberation of Mariupol’.  The ‘decree’ establishing this cynical award for carnage and destruction was issued by Denis Pushilin, the Russian-installed ‘head’ of the Donetsk people’s republic’ [‘DPR’] on 26 April (while Ukrainian defenders were still holding out at the Azovstal Plant). All is turned on its head, with so-called ‘soldiers’ from ‘DPR’, as well as the Russian Federation, claimed to have shown courage and resilience in battle with “Ukrainian armed formations”.  It is unknown how many of these ‘medals’ were issued, but some have now ended up for sale through an Internet site for less than 10 USD.

Russia’s ceaseless bombing and siege of Mariupol is believed to have killed tens of thousands of residents, and destroyed up to 90% of the infrastructure.

Russia moves to eradicate Ukraine from schools in occupied Mariupol, Kherson and Zaporizhzhia

All of the interviews can be found here https://www.youtube.com/watch?v=neMkcSXHvfw  (Inna Hladka can, for example, be heard at 22.29; 47.19 and 2.40.  She is by no means the only person highlighting the lies and deception behind Russia’s war against Ukraine.