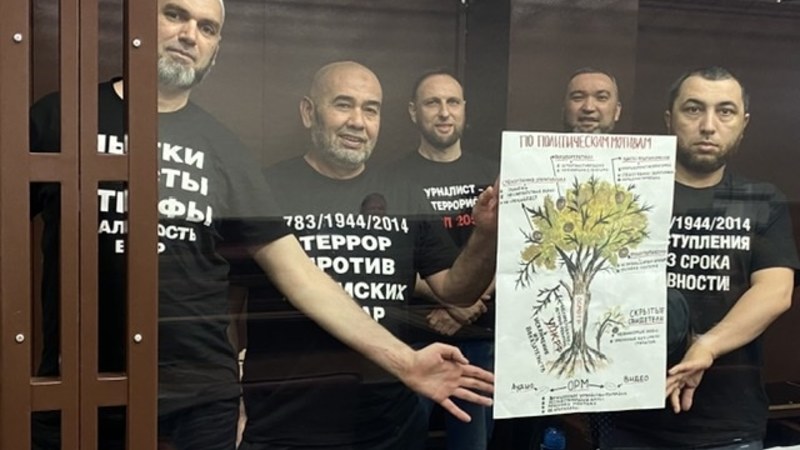 From left Rustem Sheikhaliev, Yashar Muyedinov, Ruslan Suleimanov, Enver Ametov and Osman Arifmemetov in court, 16 August 2022. Their tree shows how the rot of such politically motivated trials begins with the roots (in the ’operational measures’ used) Photo Crimean Solidarity

A Russian prosecutor has demanded 15-17-year sentences against three civic journalists and two civic activists, all of whom were involved in reporting and / or supporting the victims of Russia’s repression in occupied Crimea.  They include Osman Arifmemetov who was recently thanked for his bravery and commitment by the world-renowned political analyst Francis Fukuyama. Shortly before Russia’s full-scale invasion of Ukraine, Fukuyama wrote to Arifmemetov, calling Ukraine the frontline state in the global struggle between liberal democracy and kleptocratic authoritarianism, and writing that the situation in Crimea was an integral part of that fight.

The ‘trial’ of the five men is coming to an end at the notorious Southern District Military Court in Rostov (Russia), with the state prosecutor Yevgeny Kolpikov having already been involved in getting huge sentences passed against other Crimean Tatar political prisoners.  On 16 August, he demanded the following sentences, all of them involving the first five years in a prison, the absolute worst of all Russia’s penal institutions, with the remaining years in a harsh-regime prison colony.

These sentences are higher than a Russian court normally imposes for murder or other violent crimes, yet they are demanded against men who are not accused of any recognizable crime.  The five were arrested as part of Russia’s worst (to date) attack on 25 civic journalists and activists, most from the human rights initiative Crimean Solidarity on 27 March 2019 (or soon afterwards).  There were immediate demands for the men’s release from, among others, the US State Department, Human Rights Watch, Freedom House and Civil Rights Defenders.  In swiftly recognizing all the men as political prisoners, the Memorial Human Rights Centre condemned the arrests as an attempt to crush the Crimean Tatar human rights movement.  When speaking in defence of Rustem Sheikhaliev, the Committee to Protect Journalists noted  that “Russia has a track record of using terrorism and extremism laws to silence critics and muzzle independent news coverage.”

Each of these prosecutions is also in breach of international law since Russia is an occupying state which is prohibited from applying its legislation in Crimea and from forcibly taking Crimeans to Russia.

During the hearing on 16 August, the men wore T-shirts with messages against repression, such as “Torture, arrests and fines are the reality in the Russian Federation” and “1783, 1944 and 2014 – terror against Crimean Tatars”.  Those three years have all proven particularly tragic for Crimea’s indigenous people, and it is no accident that a poignant, award-winning text by Arifmemetov, written after his arrest, was entitled ‘My Deportation’, hearkening back to Stalin’s Deportation of the entire Crimean Tatar people in 1944.

Although Russia is using charges of ‘terrorism’ (Article 205.5) and of ‘plans to violently overthrow the state’ (Article 278), all 25 Crimean Tatars are accused solely of unproven ‘involvement’ in the Hizb ut-Tahrir movement, a peaceful transnational Muslim party which is legal in Ukraine and which is not known to have carried out acts of terrorism anywhere in the world. Russia has never provided any grounds for its highly secretive 2003 Supreme Court ruling that declared Hizb ut-Tahrir ‘terrorist’, yet, since 2014, it has been using the ruling as justification for huge sentences.  In occupied Crimea, such prosecutions and sentences are very clearly used as a weapon against Crimean Tatar civic journalists and activists.

The 25 men’s ‘trials’ were split into five groups, with each facing essentially identical charges based on the same flawed ‘evidence’. The only difference is that five other men, including journalist Remzi Bekirov, were charged with the more serious ‘organizing’ of a Hizb ut-Tahrir group (Article 205.5 § 1 of Russia’s criminal code).  Arifmemetov and the other four men on ‘trial’ with him are accused of ‘involvement’ in this totally mythical ‘Hizb ut-Tahrir group’ (Article 205.5 § 2).

The problem with these cases does not merely lie in the flawed charges, but in the entirely fabricated ‘evidence’ presented.

This includes a supposed transcript of a conversation on religious and political subjects illicitly taped around three years before the men were arrested.  As lawyer Lilia Hemedzhy pointed out in court, there are very serious discrepancies between the actual tape and the purported transcript of what is said. Some of the mistakes are too critical to believe them accidental.  The word in Crimean Tatar for a healing powder is incorrectly transcribed as ‘HIzb’, clearly to back the spurious claim that the men’s conversation was linked to Hizb ut-Tahrir. The FSB sends such ‘transcripts’ to its own ‘experts’, who lack any competence to provide the demanded assessments, but can be relied upon to claim ‘proof’ to back the charges.  In this case, as in most, the defence has presented the opinion of independent specialists who found, among other things, evidence that the tape had been tampered with.  Such independent assessments are, unfortunately, likely to be ignored by the court.

It should be noted that Russia’s repression is now increasingly directed against lawyers as well, and Hemedzhy is one of three Crimean Tatar lawyers recently stripped of their licence.  She was present at the hearing at Ruslan Suleimanov’s insistence but cannot formally represent his interests.

The main part of the ‘evidence’ comes from entirely anonymous ‘witnesses’ who may not even know the men.  In one case, such an alleged witness, was demonstrated in court to have changed his supposed ‘testimony’ to fit changes in the prosecutor’s charges.  The latter were almost certainly in revenge, after Rayim Aivazov refused to remain silent about the torture he was subjected on during and after his detention.

A 2021 report by the UN’s Secretary General was extremely critical of Russia’s use of anonymous witnesses in occupied Crimea, and of the role played by Russian judges in upholding such practice and preventing the defence from exposing the flaws in this alleged ‘testimony’.  Antonio Gutteres pointed to credible evidence that the judges are effectively taking the side of the prosecution.

Thus far, the ‘judges’ in this trial - Viacheslav Korsakov (presiding); Denis Galkin and Igor Shendrikov – have given ample grounds for warranting the same criticism.

The letters tell them they are not forgotten and show Moscow that the ‘trials’ now underway are being followed.  Letters need to be in Russian, and on ‘safe’ subjects.  If that is a problem, use the sample letter below (copying it by hand), perhaps adding a picture or photo. Do add a return address so that the men can answer.  The addresses can be written in either Russian or in English transcription (with the recipient’s name and year of birth given, as below).