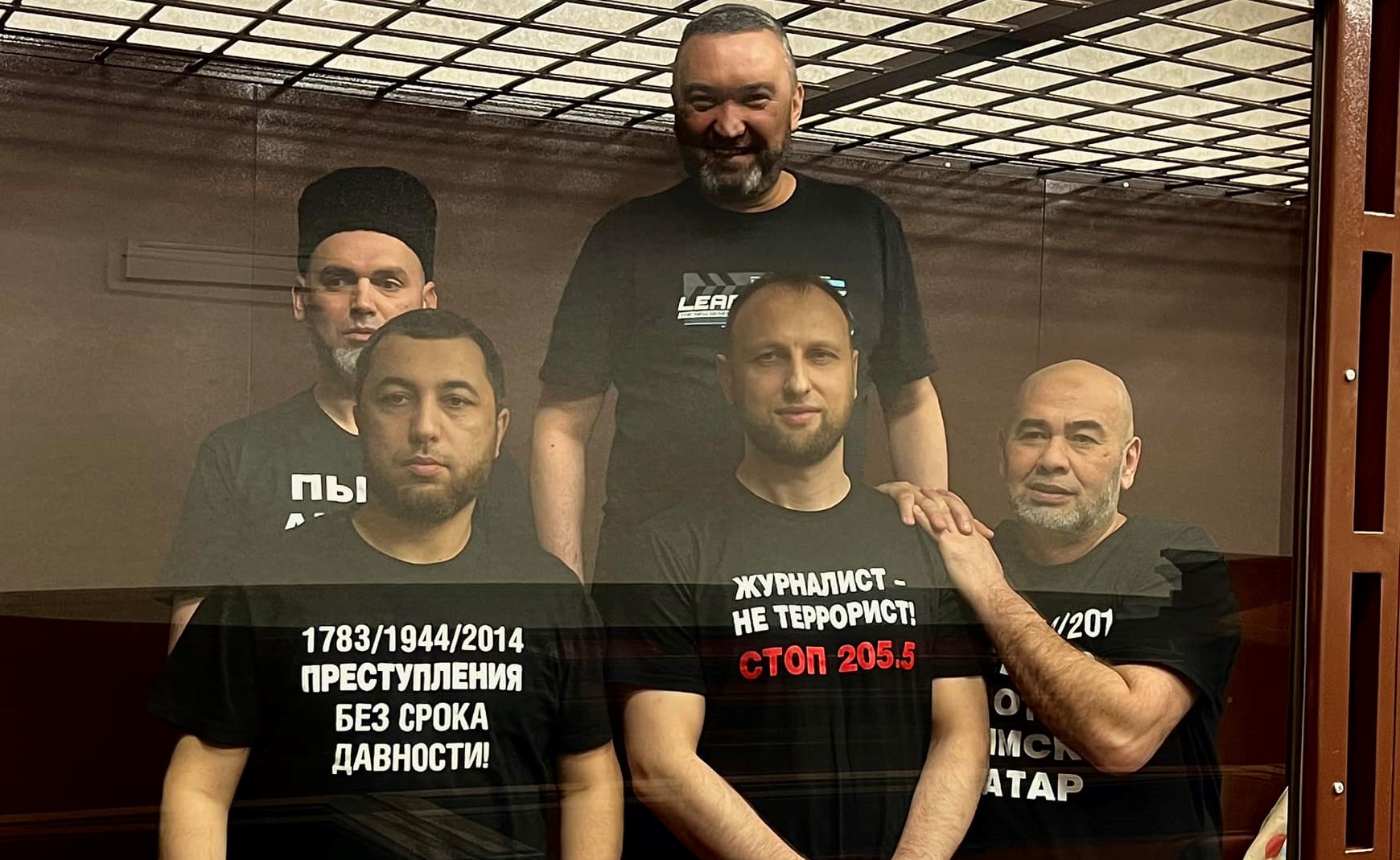 From back left clockwise Rustem Sheikhaliev, Enver Ametov, Yashar Muyedinov, Ruslan Suleimanov and Osman Arifmemetov The men’s T-shirts say, for example, that ’A journalist is not a terrorist’ and speak of the lies with no time bar of 1783, 1944 and 2014 Photo Crimean Solidarity

The Russian ‘court’ providing conveyor-like sentences against Crimean Tatar and other Ukrainian political prisoners has handed down 13-14-year sentences against three civic journalists and two activists taken prisoner in Russia’s most ferocious and internationally condemned attack to date on the Crimean Tatar human rights movement.

The 14-year sentences against Crimean Solidarity civic journalists Osman Arifmemetov; Rustem Sheikhaliev and Ruslan Suleimanov and 13-year sentences against civic activists Enver Ametov and Yashar Muyedinov were, unfortunately, no surprise.  Although not one of the men was accused of any recognizable crime, the only question mark in this political ‘trial’ was how long the harsh-regime sentence would be for, and how many years would be in a prison, the absolute worst of Russia’s penal institutions.  Prosecutor Yevgeny Kolpikov demanded sentences of 15-17 years, with 5 years in a prison.  ‘Judges’ Viacheslav Korsakov (presiding); Denis Galkin and Igor Shendrikov from the notorious Southern District Military Court in Rostov made it 13-14 years, with 4 years in a prison.  The number of years appears to be fairly arbitrary, with the sole certainty being that the FSB officers who concocted the charges, the prosecutor and ‘judges’ were all perfectly well aware that they were taking part in imprisoning innocent men.   Not only were the charges themselves fundamentally flawed, but the alleged ‘evidence’ was clearly fabricated.  During the court hearings, Lilia Hemedzhy, Suleimanov’s lawyer, pointed out that the FSB were supposed to have been watching the five men on suspicion of ‘terrorism’ for seven years, yet the only ‘evidence’ provided had been from four ‘secret witnesses’ whose claims cannot be verified.  No grounds have ever been provided for allowing anonymous ‘witnesses’, yet, in this case and others, the ‘judges’ systematically blocked the defence’s attempts to demonstrate that they are lying.

Worth noting that a 2021 report from the UN Secretary General pointed to numerous violations of the right to a fair trial in occupied Crimea, including the use of anonymous witnesses.  .The report specifically mentioned the use of anonymous witnesses and the active obstruction by the courts of defence attempts to properly question such individuals.

Given such violations and the sentences passed on 24 November, it would be naïve to believe that the ‘judges’ even listened to the defendants’ final address.  These, however, provide much more insight into the men’s persecution than the fatally flawed charges against them and fabricated ‘evidence’.

In a particularly powerful address, Osman Arifmemetov explained that 2016 had become a watershed year for him.  This was when Russia began openly persecuting Crimean Tatars and (occasionally) other Ukrainian Muslims in occupied Crimea.  Osman had seen men from his village seized on clearly spurious charges of ‘terrorism’ and understood that he must act. “I took my tablet and began videoing. Later, I posted the videos on the Internet so that our people and the entire international community could look and see that there is in fact no terrorism nor are there terrorists in Crimea.  As there never were over 30 years.”  He began attending political trials, as well as providing coverage of armed searches, etc.  He also mentions one crucial example, that of the attempted abduction of Bilyal Adilov from outside a court where a political trial was underway.  Russia brought enforced disappearances to occupied Crimea in 2014 and the whereabouts (or fate) of a large number of Ukrainians, especially Crimean Tatars, remain unknown to this day.  It is quite possible that Adilov was not abducted in similar fashion because of the actions of Arifmemetov and other civic journalists.

Like most civic activists / journalists, Arifmemetov was himself detained and jailed on fabricated administrative charges, merely for such civic journalist activities.

“Half of our people were killed in 1944 [in Stalin’s Deportation of the entire Crimean Tatar people], and now events are being repeated.  We must not stand on the side line. Of course, such activities annoyed the FSB.  I had a choice: leave Crimea or receive a long prison sentence.”

All of this was while Osman needed to find new work to support his wife and two children. The invasion and annexation had ended his previous career (developing software) and he switched jobs for some time before concentrating on teaching.

Arifmemetov had made his choice, based on his own moral sense, as well as awareness of the suffering and injustice that his grandparents had endured during the Deportation.  He remained in Crimea and was one of 23 civic activists and journalists whom the FSB came for on 27 March 2019.

He calls the charge of having “tried to systematically sway new people to take part in the activities of a terrorist operation” and similar accusations to have come from the investigators’ diseased imagination. “During the space of 30 years of living in Crimea, I don’t recall a single terrorist act.  I had also not heard of terrorists before Russia arrived with its inhuman legislation and nostalgia for the past. <>

Russia abuses its quasi-extremist and terrorist legislation, holds show trials on religious or political grounds, against civic activists, including Crimean Tatar, to ensure that an atmosphere of fear reigns in Crimea.  There is a term for this – “state terrorism”.  It is used to signify state violence against civilians.”

Arifmemetov goes on to describe the illegal detentions, killings, torture, etc. that are normally associated with such state terrorism and cites the Geneva Declaration on Terrorism.  This says that “state terrorism manifests itself in: 1) police state practices against its own people to dominate through fear by surveillance, disruption of group meetings, control of the news media, beatings, torture, false and mass arrests, false charges and rumors, show trials, killings, summary executions and capital punishment …”

“You designate us terrorists, treat us like terrorists, although we did not plan any terrorist act. The day will come when in Russia they will seek those guilty of political repression, the persecution of activists; journalists; human rights defenders. And they will designate you as terrorists. As the lowest link in this system, as the implementer of unlawful verbal shady instructions.”

Attack on civic journalists and activists

The arrests on 27 March 2019, and of two other men Rayim Aivazov and Ruslan Suleimanov’s brother, Eskender Suleimanov, were very widely condemned.

The overt targeting of civic journalists and activists was very widely condemned.  Both the US State Department and the EU called the move illegal and demanded the men’s release. Human Rights Watch called the arrest “an unprecedented move to intensify pressure on a group largely critical of Russia’s occupation of the Crimean Peninsula” and stated unequivocally that attempts “to portray politically active Crimean Tatars as terrorists” is aimed at silencing them. Freedom House and Civil Rights Defenders called the arrests “yet another serious abuse of power by the de facto authorities, transparently aimed at striking fear into a community that has suffered severely during Russia’s occupation of Crimea”.  The Memorial Human Rights Centre was swift to declare all the men political prisoners and denounce the attempt “to crush the Crimean Tatar human rights movement”.  The Committee to Protect Journalists has written about the persecution of Rustem Sheikhaliev and notes that “Russia has a track record of using terrorism and extremism laws to silence critics and muzzle independent news coverage.”  At the end of 2021, prominent American political scientist Francis Fukuyama wrote a letter to Arifmemetov, expressing admiration and support.  The letter made it quite clear that he was speaking in defence of Arifmemetov and all courageous journalists who have refused to remain silent about repression in occupied Crimea and have paid a terrible price for their bravery.

Although Russia is using charges of ‘terrorism’ (Article 205.5) and of ‘plans to violently overthrow the state’ (Article 278), all 25 Crimean Tatars are accused solely of unproven ‘involvement’ in the Hizb ut-Tahrir movement, a peaceful transnational Muslim party which is legal in Ukraine and which is not known to have carried out acts of terrorism anywhere in the world. Russia has never provided any grounds for its highly secretive 2003 Supreme Court ruling that declared Hizb ut-Tahrir ‘terrorist’, yet, since 2014, it has been using the ruling as justification for huge sentences.  In occupied Crimea, such prosecutions and sentences are very clearly used as a weapon against Crimean Tatar civic journalists and activists.

The 25 men’s ‘trials’ were split into five groups, with each facing essentially identical charges based on the same flawed ‘evidence’. The only difference is that five other men, including journalist Remzi Bekirov, were charged with the more serious ‘organizing’ of a Hizb ut-Tahrir group (Article 205.5 § 1 of Russia’s criminal code).  Arifmemetov and the other four men on ‘trial’ with him are accused of ‘involvement’ in this totally mythical ‘Hizb ut-Tahrir group’ (Article 205.5 § 2).

The alleged ‘evidence’ presented in this case is as flawed as the charges.  It includes a supposed transcript of a conversation on religious and political subjects illicitly taped around three years before the men were arrested.  As lawyer Lilia Hemedzhy pointed out in court, there are very serious discrepancies between the actual tape and the purported transcript of what is said. Some of the mistakes are too critical to believe them accidental.  The word in Crimean Tatar for a healing powder is incorrectly transcribed as ‘HIzb’, clearly to back the spurious claim that the men’s conversation was linked to Hizb ut-Tahrir. The FSB sends such ‘transcripts’ to its own ‘experts’, who lack any competence to provide the demanded assessments, but can be relied upon to claim ‘proof’ to back the charges.  In this case, as in most, the defence has presented the opinion of independent specialists who found, among other things, evidence that the tape had been tampered with.

The main part of the ‘evidence’ comes from entirely anonymous ‘witnesses’ who may not even know the men.  In one case, such an alleged witness, was demonstrated in court to have changed his supposed ‘testimony’ to fit changes in the prosecutor’s charges.  The latter were almost certainly in revenge, after Rayim Aivazov refused to remain silent about the torture he was subjected on during and after his detention.

The FSB also increasingly plant ‘prohibited religious literature’ during the initial armed searches and arrests, at which lawyers are invariably prevented from being present.  It is unclear whether this is merely a case of ongoing insensitivity and disrespect, or whether the FSB deliberately plant such literature in places that no devout Muslim would hold any religious book to show that they can do whatever they like.

The sentences will, of course, be appealed, but there are no grounds for expecting justice from any Russian involved in these cases.  It is maximum publicity that is, first and foremost needed.

The letters tell them they are not forgotten and show Moscow that the ‘trials’ now underway are being followed.  Letters need to be in Russian, and on ‘safe’ subjects.  If that is a problem, use the sample letter below (copying it by hand), perhaps adding a picture or photo. Do add a return address so that the men can answer.  The addresses can be written in either Russian or in English transcription (with the recipient’s name and year of birth given, as below).