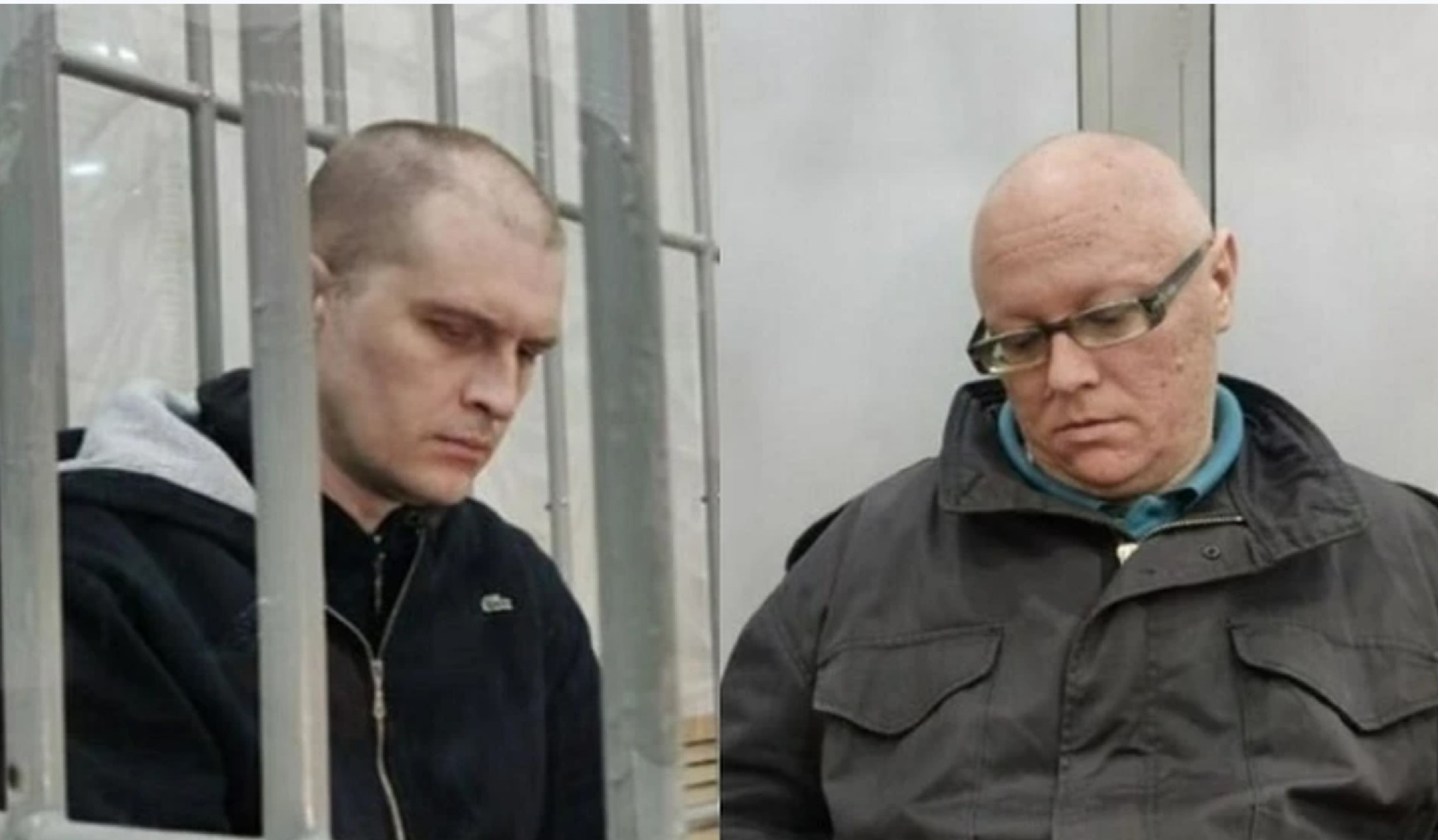 From left Maksym Petrov, Dmytro Shabanov Photo by necessity from the video footage produced for ’LPR’ and Russian propaganda channels

An unrecognized ‘court’ in the Russian proxy ‘Luhansk people’s republic’ [‘LPR’] has ‘convicted’ two Ukrainians working for the OSCE Special Monitoring Mission to Ukraine of ‘treason’ and imposed 13-year sentences.  The spectacle was condemned by the OSCE as “nothing but pure political theatre… inhumane and repugnant.  Russian state-controlled media, on the other hand, reported these show trials without mentioning that they were sentences passed by a fake court in a pseudo-republic, which even Russia, which created and controls it, only recognized on the eve of its full-scale invasion of Ukraine.

Presumably in preparation for its all-out war against Ukraine, Moscow began blocking the limited amounts of OSCE monitoring that it had allowed back in September 2021.  Then in April 2022, the OSCE Special Monitoring Mission [SMM] was closed after Russia refused to agree to an extension of its mandate.  On 30 April, the Russian-installed ‘LPR leader’ Leonid Pasechkin ‘banned’ the OSCE which Russia remains a party to.

The two OSCE employees whom the Russian proxies ‘arrested’ in April are both residents of Luhansk oblast, which served as the Russian proxies’ excuse for the absurd charges of ‘state treason’.  Dmytro Shabanov worked for SMM as a security assistant, while Maksym Petrov was an interpreter for the Mission.  It was claimed that both Shabanov and Petrov had been ‘recruited’ by Ukraine’s Security Service [SBU] and by the American CIA.  They were specifically accused of passing on information about ‘the movement of military personnel and equipment’ within the pseudo-republic.  While the charges are doubtless pure fiction with respect to these two men, it was, in fact, part of the SMM mandate to monitor the movement of military personnel and equipment.  On many occasions, SMM drones spotted large movement of military trucks clearly carrying such equipment from Russian by night, along dirt roads, away from any legitimate border crossings.

Videos were produced and circulated of  the announcement of the 13-year sentences on 19 September.  These were passed by a so-called panel of judges of the unrecognized ‘LPR supreme court’.  Such puppets have been handing down similar sentences since 2014, with ‘spying’ charges a favourite against Ukrainians taken hostage for as little as expressing pro-Ukrainian views on social media.  There are no grounds at all for believing that the men had any access to independent lawyers, nor is there any chance of even minimal observance of their right to a fair trial.   The ‘sentences’ can, and presumably will, be appealed, but any appeal would be heard by a similar kangaroo court.

Similarly shocking travesties have been seen over recent months in the Russian-controlled ‘Donetsk people’s republic’ [‘DPR’].  In April 2022, three foreign nationals living in Ukraine and serving as part of the Ukrainian Armed Forces in Mariupol were seized by Russian or ‘DPR’ fighters.  The two Britons - Shaun Pinner (48) and Aiden Aslin (28) and Moroccan Brahim Saadoun – are, in accordance with international law, prisoners of war who must not be put on trial for serving as soldiers. Russia began using the men for propaganda purposes immediately after their ‘arrest’, with the two Britons shown on Russian state television asking that they be exchanged for Viktor Medvedchuk, the pro-Russian Ukrainian politician and crony of Russian leader Vladimir Putin, facing trial in Ukraine for treason. There is every reason to assume that they made the videos under duress.

The three men were ‘sentenced to death’ by the pseudo ‘DPR supreme court’ on 12 July, with these ‘sentences’ currently awaiting appeal (or, more likely, some kind of deal demanded by Russia, to secure their release.  The European Court of Human Rights intervened almost immediately demanding that Russia did not carry out these monstrous ‘sentences’ (details here).  ‘DPR’ has since caused the death of one other Briton (Paul Urey) and is threatening to put five other foreign POWs (Britons John Harding, Andrew Hill and Dylan Healy, as well as Matthias Gustafsson from Sweden and Croat Vjekoslav Prebeg ‘on trial’.  The same disregard for facts and international law are, unfortunately, guaranteed.