After destroying Mariupol, Russia claims its residents "voted" for annexation and mobilizes them to fight Ukraine ‘Vote to join Russia’ or armed soldiers will come for youRussia needs sham "referendums" on occupied territory to forcibly mobilize Ukrainians as cannon fodder Russia sends forcibly mobilized Ukrainians from occupied Donbas to die as ‘live bait’ at the frontlineCovert mobilization and Ukrainian conscripts from occupied Crimea sent to die in Russia’s war against Ukraine Russian legislative changes would mean school leavers can officially be sent to fight in Ukraine Desperate plea from the wives of Donbas men seized and sent to fight Russia’s war against UkraineRussia deports Ukrainians to occupied Donbas, forcing them to fight its war against Ukraine Russia is forcibly ‘mobilizing’ Ukrainians from occupied territory to fight its war against Ukraine Russia plans total ‘filtration’ of Mariupol men and forced ‘mobilization’Russia destroys Mariupol and tries to get illegally deported residents to move to Siberia Russia accused of using mobile crematoria to hide its war crimes in Mariupol At least 50 Ukrainians were burned to death in Russia’s bombing of Mariupol hospitals Russian FSB produce ‘refugee’ propaganda video blaming Ukrainian soldiers for Russia"s war crimes in Mariupol Russia continues bombing Mariupol while producing propaganda videos about its ‘humanitarian aid’Russia responds to International Court order to stop bombing Ukraine by destroying Mariupol Theatre sheltering familiesRussian invaders take Mariupol intensive care hospital and its patients hostage Mass graves of the Ukrainian civilians Russia claims it is not killingTerror and abductions as Russia tries to break Ukrainian resistance in Kherson and other occupied citiesUkrainian journalist Oleh Baturin feared abducted by Russian invaders in Kherson oblast
• Topics / War crimes 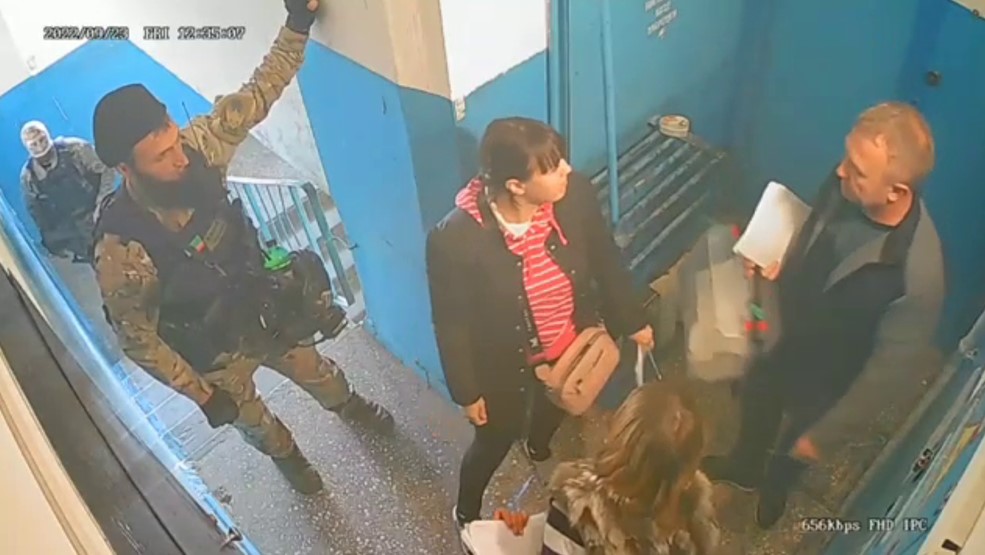 In occupied parts of both the Luhansk and Donetsk oblasts, the alleged number of people who ‘voted’ in Russia’s sham ‘referendums’ on annexation far exceeded the actual number of residents.  Not only would infants have needed to take part, if the figures were to have any basis in reality, but also the dead. The figures, in fact, had no basis in either reality, or legality, and it is frustrating that western media should be showing video footage of the so-called ‘voting’ from Russian propaganda sources.  Perhaps these same media might like to consider what they would have shown had television been around to broadcast the propaganda used by Hitler or Stalin to conceal their crimes.

Russian leader Vladimir Putin is due on 30 September to ‘sign off’ the annexation of occupied parts of the Donetsk, Luhansk, Kherson and Zaporizhzhia oblasts, with this claimed to be ‘at the wish of the local population’.  Local collaborators clearly wanted to please and claimed near 100% ‘support’ from people whom Russia has been bombing and terrorizing for the past six months.  Such statistics would be ludicrous even without the clear proof of flagrant falsification, as well as the methods of coercion used to extract ‘votes’.

Serhiy Haidai, Head of the Luhansk Regional Administration, reports that the Russian arithmetic was absurd.  The alleged number of ‘votes’ in favour of Russia’s annexation was much higher than the actual number of people living in occupied parts of Luhansk oblast.  It was claimed that over 1.6 million people had ‘voted to join Russia’, with a frequency of 94%, although back in October 2012, when the entire Luhansk oblast voted in parliamentary elections, there were just over 1.8 million registered voters.  This is after months of relentless Russian bombing and shelling of all main cities, with Ukraine having been making all efforts to ensure the evacuation of the civilian population.  As Haidai points out, in order to obtain such results, both children and ‘dead souls’ would need to have ‘voted’ in this pseudo-referendum in Luhansk oblast.

Although the propaganda video footage shows polling stations, and even, on occasion, ‘queues to vote’, photos and videos sent to the real, democratically elected, authorities show that the vast majority of the so-called ‘votes’ were collected by ‘mobile electoral commissions’ made up of two collaborators and one or two soldiers or similar, brandishing machine guns.  These individuals turned up at people’s homes, with it easy to imagine how few people felt confident about voting against annexation with a gun either directly, or effectively, pointed at them.  At least in Mariupol, but probably also in the Luhansk oblast cities (Sievierodonetsk and Lisychansk) that Russia virtually razed to the ground, there were other brutally cynical methods of ensuring a ‘yes’ vote.  With entire apartment blocks half destroyed, and cut off from electricity, heating and water, those who ‘voted’ were given to understand that they could forget being connected to such services unless they ‘voted to join’ the country that attack them. 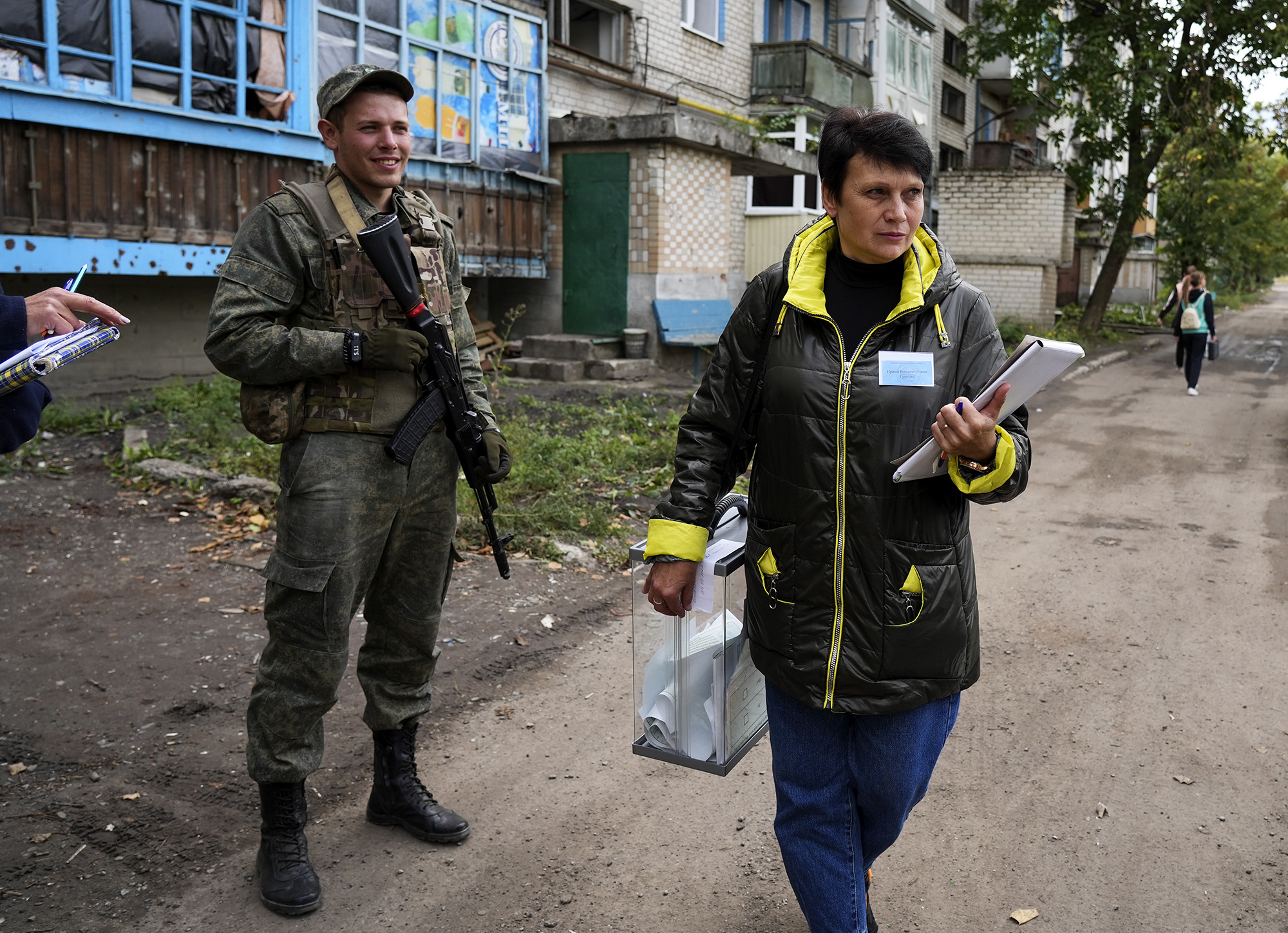 Ukrainian human rights defender, Pavlo Lisiansky, reported on 28 September that they know of several people who had been detained when they refused to take part in the sham ‘voting’.  With much of occupied Donbas having already been under effectively Russian control since 2014, most men have already been forcibly mobilized, but not all, especially given the new areas seized since the beginning of the full-scale invasion.  The Eastern Human Rights Group, Lisiansky said, are aware of men who refused to take part in the farce and were ‘mobilized’ the following day.  Throughout occupied Donbas, prisoners, including both those civilian hostages and POWs imprisoned since before the full-scale invasion, and those held in Olenivka and other so-called ‘filtration camps’ were forced to take part.  These people are entirely at the mercy of their captors and there is effectively no chance that they were allowed to either refuse to take part or cast a ‘vote’ against annexation.

It is known that many Russians brought into occupied parts of Ukraine took part in the stunt, although there could be no justification for their participation.  Lisiansky also confirms that the numbers are simply absurd, and points to flagrant rigging.

In fact, everything about this evident sham points to the ‘outcome’ and figures cited having been decided in Moscow and having absolutely nothing to do with any ‘vote’ counting.

It had been reported for several months that people on occupied territory were being tricked into providing their personal data, or simply forced to in order to receive the humanitarian aid without which, after months of Russian attacks, you cannot survive.  That is, of course, assuming that Russia is even trying to falsify the ‘voting’ records, and at present there seems little evidence of this.  Certain so-called ‘observers’ were brought in, as they have been for all such Russian stunts, to say on camera that everything was above board.  The individuals are invariably known for providing such services to the Kremlin and / or for their unwavering pro-Russian views.

In areas under Russian occupation prior to 24 February, it had long been dangerous to express any pro-Ukrainian views.  A large number of the over 300 hostages taken prisoner before the full invasion were seized for supporting Ukraine (details here). In those areas, especially of the Kherson and Zaporizhzhia oblasts, seized over the last six months, the Russian invaders have come for and abducted or imprisoned all of those with an openly pro-Ukrainian position.  That, however, has not crushed resistance which remains strong.  Ivan Fedorov, Mayor of Melitopol (Zaporizhzhia oblast) reports that the real number of Zaporizhzhia oblast voters who took part in the Russian fake ‘referendum’ was as low as 0,3%.

People are known to have been able to ‘vote’ without passports and could therefore cast any number of such ‘votes’.   Russia also opened more than 600 so-called polling stations in Russia or occupied Crimea.  These were purportedly for those supposedly evacuated, in fact, forcibly deported from occupied parts of Ukraine.  There are no grounds for believing that only those entitled to express an opinion were able to shove ‘ballot papers’ in the box, nor was there any possibility for those living in government-controlled Ukraine to take part.

There is simply no possibility of justifying such a sham referendum which is in flagrant violation of the Ukrainian Constitution and has no legal consequences.  At present, there is no sign that one of the Kremlin’s aims – of deterring western countries from supporting Ukraine - is working.  Yes, there is much noise in the media about Russia now threatening nuclear attacks (claiming it is defending ‘its own territory’), but no credible way that this could be seriously used as an argument for what would be dangerous capitulation to the terrorist tactics of an aggressor state.

One consequence will, however, be immediate and tragic.  Russia has already shown that it will use men from occupied territory as cannon fodder for its aggression against Ukraine, and forced mobilization is likely to swiftly follow Russia’s supposed annexation.  Western response should be equally swift, and devastating.  Without it, Russia will not stop.