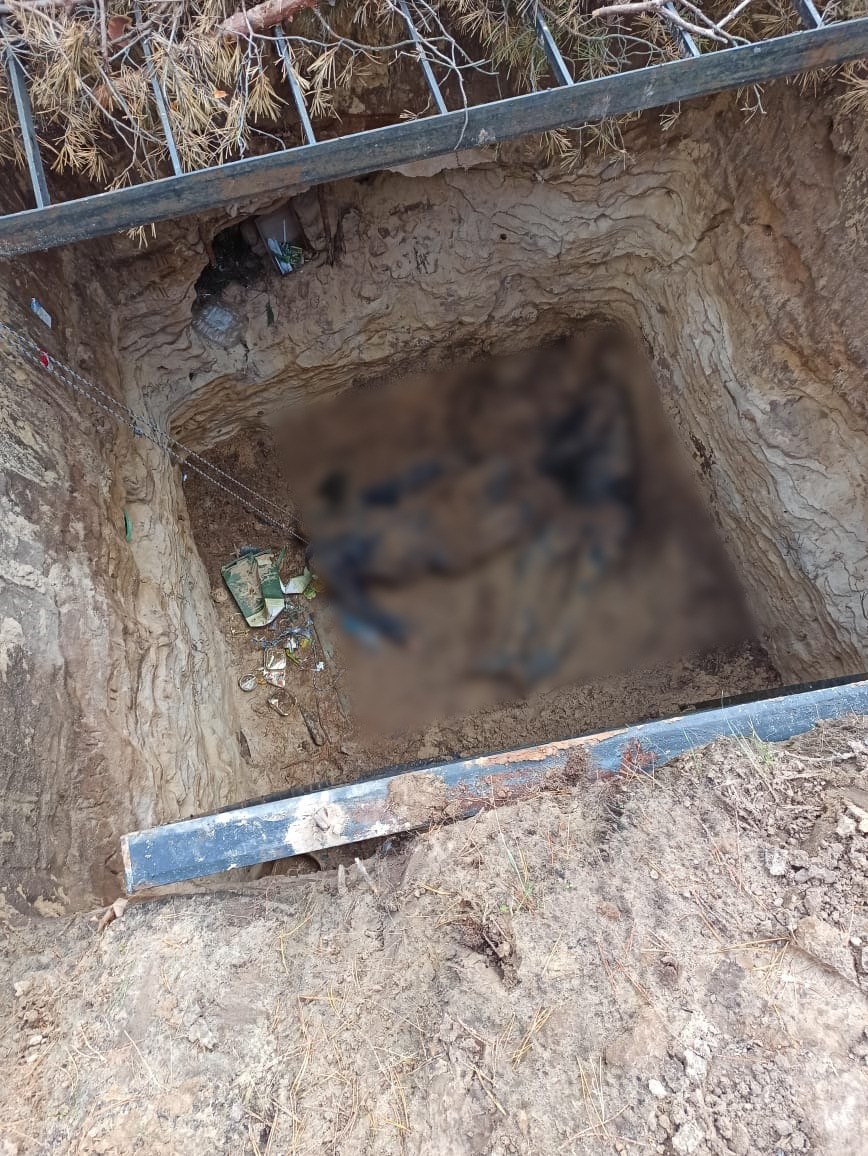 Ukrainian investigators have discovered yet more bodies and another torture chamber used by the Russian invaders during their occupation of parts of Kharkiv oblast.  Although it seems likely that the huge collection of gold crowns and dentures were not, as initially feared, extracted from prisoners, there is still clear evidence that prisoners were savagely tortured, with it likely that some were killed.  The discovery on 3 October brings to at least twenty the number of Russian prisons / torture chambers which have come to light since the Ukrainian Armed Forces liberated the area in early September.

Serhiy Bolvinov, chief Kharkiv regional investigator, reported the new discovery in Pisky-Radkivski on 4 October.  Local residents had approached the police and informed of a basement which the Russians had used to imprison, and torture, local residents, former defenders who took part in the initial phase of the military conflict in Donbas, as well as Ukrainian prisoners of war.

The police have already established that prisoners were tortured by being buried alive, and then dug up. as well as with the use of a gas mask stuffed with a smouldering rag.  Neighbours have said that they used to hear screams from the victims during the night. It was this and the tray full of gold crowns and dentures that initially led to the conclusion that the Russians had forcibly extracted the crowns, etc. from their victims.  In fact, a dentist has shown Bild some of the crowns and dentures that he collected over his career and it seems likely that the tray found by the investigators was part of the Russians’ plunder, rather than evidence of a more savage crime.  Investigators have so far identified the prisoners of war whom the Russians held and tortured.

The police first reported the horrific conditions in which people had been imprisoned in Pisky-Radkivski on 3 October.  They were also gathering evidence of other crimes committed by the Russians who had forced local residents out of their homes which they then occupied and, seemingly, plundered.

On 29  September, the police reported the discovery of a torture chamber in the town of Vovchansk.  This had been used by the invaders to imprison, and torture, local residents who opposed the occupation and refused to collaborate.  Investigators had found nooses, etc. for torture, and also a prayer that one of the Russians’ victims had scratched out on the wall of the cell.  They had learned from one witness that the Russians had held from 20 to 40 people in a ‘cell’ of around 12 square metres.  There too it is reported that the Russians used electric shocks for torture, as well as pulling out fingernails and breaking their victims’ fingers.

Three ‘prisons’ were set up by the Russians in Kozacha Lopan, an urban settlement very close to the border with Russia.  The invaders also forcibly deported many residents to Russia (details here).

On 23 September, Serhiy Pantelieyev, Deputy Head of the Police CID, reported that 18 Russian prisons had so far been found since parts of the Kharkiv oblast had been liberated.  That figure would have included effective torture chambers discovered at Izium, Balakliya and Kozacha Lopan, but not those in Vovchansk and Pisky-Radkivski (and possibly others).

While the largest mass burial site after the Russians were driven out was found just outside Izium, investigators have reported discovering the bodies of individuals or of two or more victims in many parts of the oblast from which the Russians were forced to retreat.

On 3 October alone, the police reported two gruesome discoveries.  In the village of Kamianka (Izium raion), the mummified bodies were found in the basement of a devastated building of two men.  The bodies have been sent for forensic examination to determine the cause of death, with the police having initiated a criminal investigation under Article 439 (war crimes).

In the village of Novoplatonivka, the bodies of two men, aged from 30-35, were discovered in a sandpit on the premises of a holiday centre. Both were wearing civilian clothes and appeared to have been tortured.  According to the police, up to 350 Russian special forces had been based at the centre. Here too, the investigation is over war crimes.

On 6 October, Ukraine’s Prosecutor General reported the discovery of another two victims in Kupiansk-Vuzlovy. The bodies of two men, both of whom had been bound, were found at a brick factory.  One of the men had been shot, and both had injuries to parts of their body.

It is a war crime to target civilians, and to torture prisoners of war.  The above are only some of the huge number of occasions since 24 February when the Russian invaders have done both.